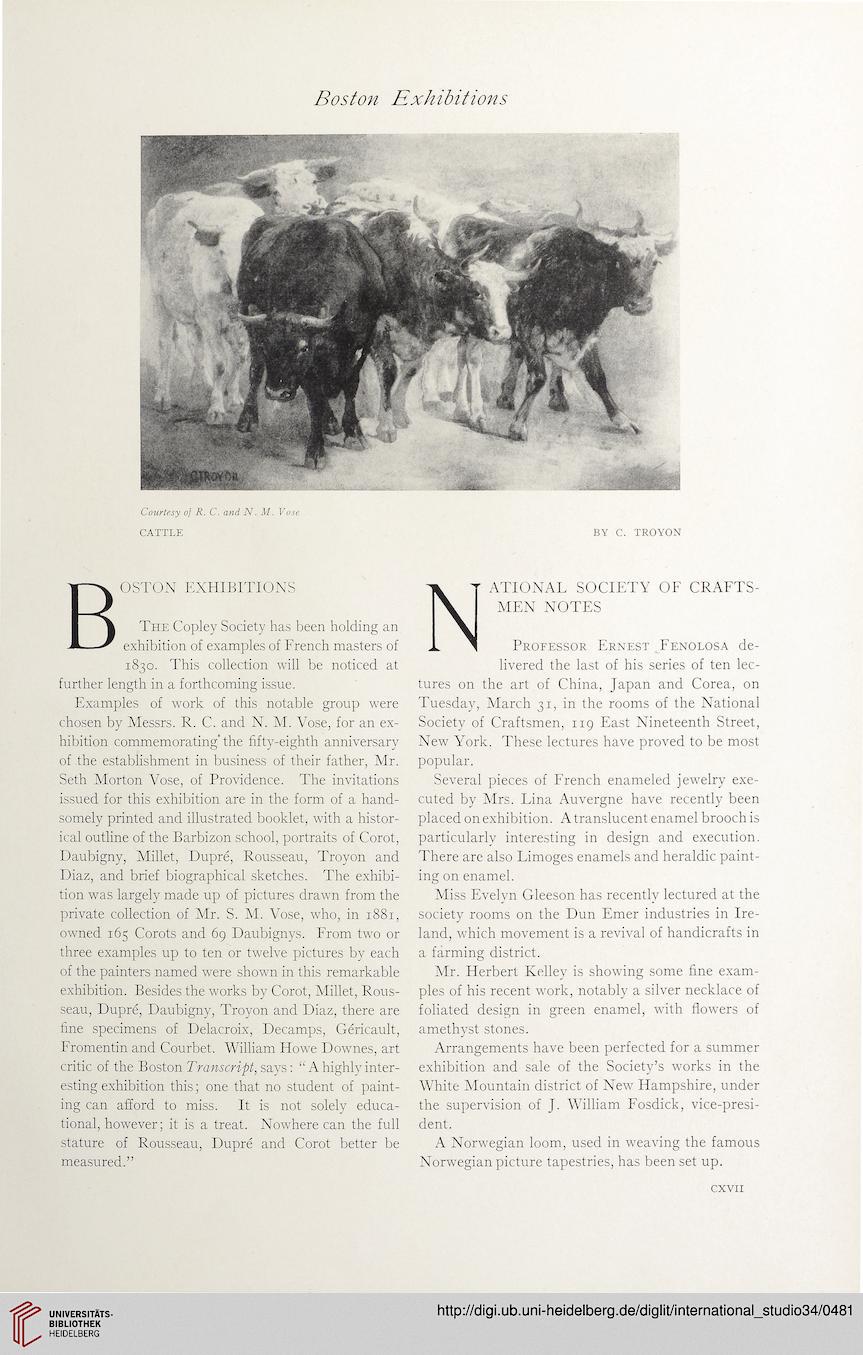 Boston exhibitions
The Copley Society has been holding an
exhibition of examples of French masters of
1830. This collection will be noticed at
further length in a forthcoming issue.
Examples of work of this notable group were
chosen by Messrs. R. C. and N. M. Vose, for an ex-
hibition commemorating’the fifty-eighth anniversary
of the establishment in business of their father, Mr.
Seth Morton Vose, of Providence. The invitations
issued for this exhibition are in the form of a hand-
somely printed and illustrated booklet, with a histor-
ical outline of the Barbizon school, portraits of Corot,
Daubigny, Millet, Dupre, Rousseau, Troyon and
Diaz, and brief biographical sketches. The exhibi-
tion was largely made up of pictures drawn from the
private collection of Mr. S. M. Vose, who, in 1881,
owned 165 Corots and 69 Daubignys. From two or
three examples up to ten or twelve pictures by each
of the painters named were shown in this remarkable
exhibition. Besides the works by Corot, Millet, Rous-
seau, Dupre, Daubigny, Troyon and Diaz, there are
fine specimens of Delacroix, Decamps, Gericault,
Fromentin and Courbet. William Howe Downes, art
critic of the Boston Transcript, says: “ A highly inter-
esting exhibition this; one that no student of paint-
ing can afford to miss. It is not solely educa-
tional, however; it is a treat. Nowhere can the full
stature of Rousseau, Dupre and Corot better be
measured.”

Professor Ernest Fenolosa de-
livered the last of his series of ten lec-
tures on the art of China, Japan and Corea, on
Tuesday, March 31, in the rooms of the National
Society of Craftsmen, 119 East Nineteenth Street,
New York. These lectures have proved to be most
popular.
Several pieces of French enameled jewelry exe-
cuted by Mrs. Lina Auvergne have recently been
placed on exhibition. A translucent enamel brooch is
particularly interesting in design and execution.
There are also Limoges enamels and heraldic paint-
ing on enamel.
Miss Evelyn Gleeson has recently lectured at the
society rooms on the Dun Emer industries in Ire-
land, which movement is a revival of handicrafts in
a farming district.
Mr. Herbert Kelley is showing some fine exam-
ples of his recent work, notably a silver necklace of
foliated design in green enamel, with flowers of
amethyst stones.
Arrangements have been perfected for a summer
exhibition and sale of the Society’s works in the
White Mountain district of New Hampshire, under
the supervision of J. William Fosdick, vice-presi-
dent.
A Norwegian loom, used in weaving the famous
Norwegian picture tapestries, has been set up.