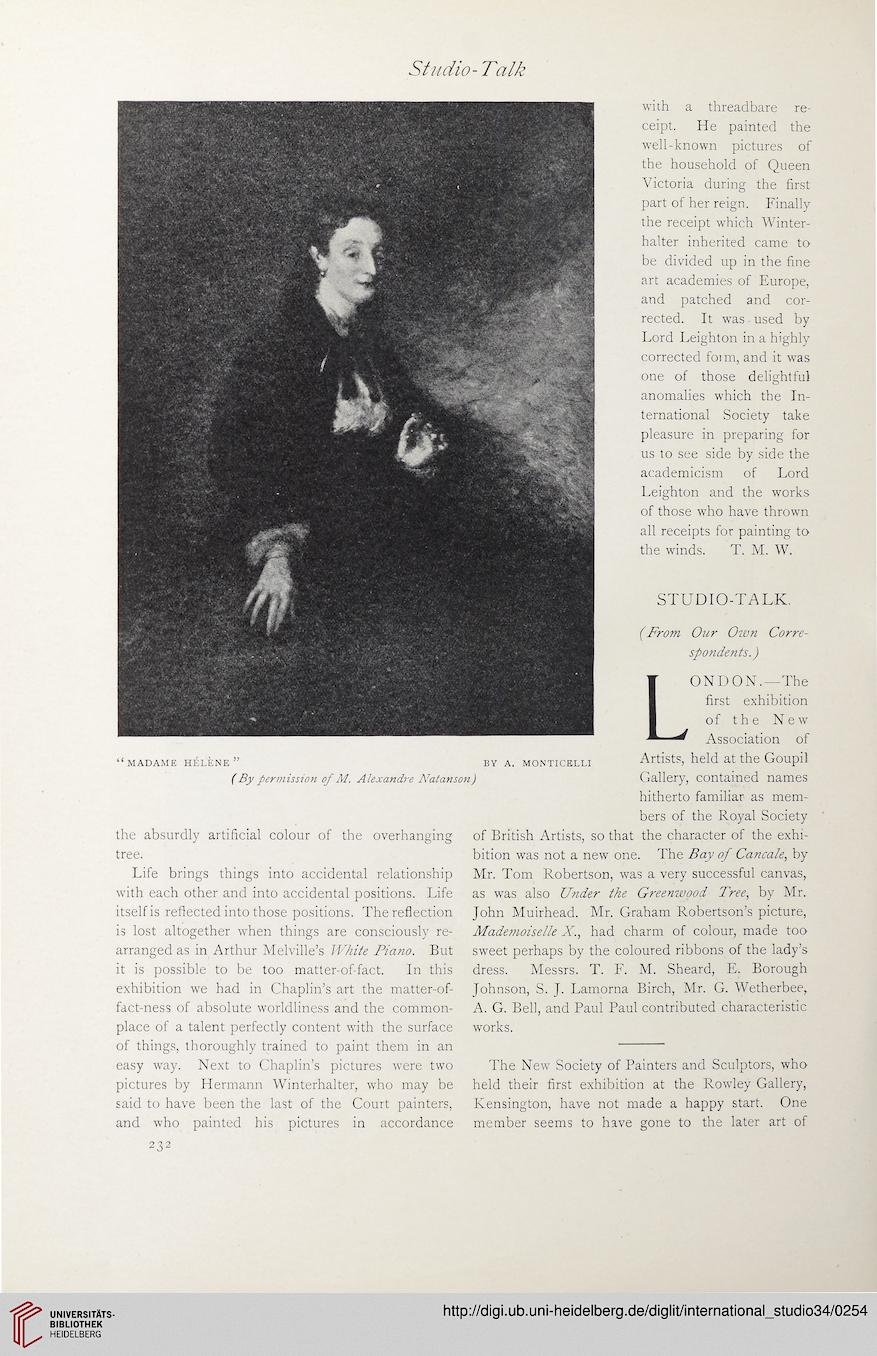 
with a threadbare re-
ceipt. He painted the
well-known pictures of
the household of Queen
Victoria during the first
part of her reign. Finally
the receipt which Winter-
halter inherited came to
be divided up in the fine
art academies of Europe,
and patched and cor-
rected. It was used by
Lord Leighton in a highly
corrected foim, and it was
one of those delightful
anomalies which the In-
ternational Society take
pleasure in preparing for
us to see side by side the
academicism of Lord
Leighton and the works
of those who have thrown
all receipts for painting to
the winds. T. M. W.

(From Our Own Corre-
spondents.)

(By permission of M. Alexandre ATatanson)

London.—The
first exhibition
of the New
Association of
Artists, held at the Goupil
Gallery, contained names

the absurdly artificial colour of the overhanging
tree.
Life brings things into accidental relationship
with each other and into accidental positions. Life
itself is reflected into those positions. The reflection
is lost altogether when things are consciously re-
arranged as in Arthur Melville’s White Piano. But
it is possible to be too matter-of-fact. In this
exhibition we had in Chaplin’s art the matter-of-
fact-ness of absolute worldliness and the common-
place of a talent perfectly content with the surface
of things, thoroughly trained to paint them in an
easy way. Next to Chaplin’s pictures were two
pictures by Hermann Winterhalter, who may be
said to have been the last of the Court painters,
and who painted his pictures in accordance
232

hitherto familiar as mem-
bers of the Royal Society
of British Artists, so that the character of the exhi-
bition was not a new one. The Bay of Cancale, by
Mr. Tom Robertson, was a very successful canvas,
as was also Under the Greenwood Tree, by Mr.
John Muirhead. Mr. Graham Robertson’s picture,
Mademoiselle X., had charm of colour, made too
sweet perhaps by the coloured ribbons of the lady’s
dress. Messrs. T. F. M. Sheard, E. Borough
Johnson, S. J. Lamorna Birch, Mr. G. Wetherbee,
A. G. Bell, and Paul Paul contributed characteristic
works.

The New Society of Painters and Sculptors, who
held their first exhibition at the Rowley Gallery,
Kensington, have not made a happy start. One
member seems to have gone to the later art of