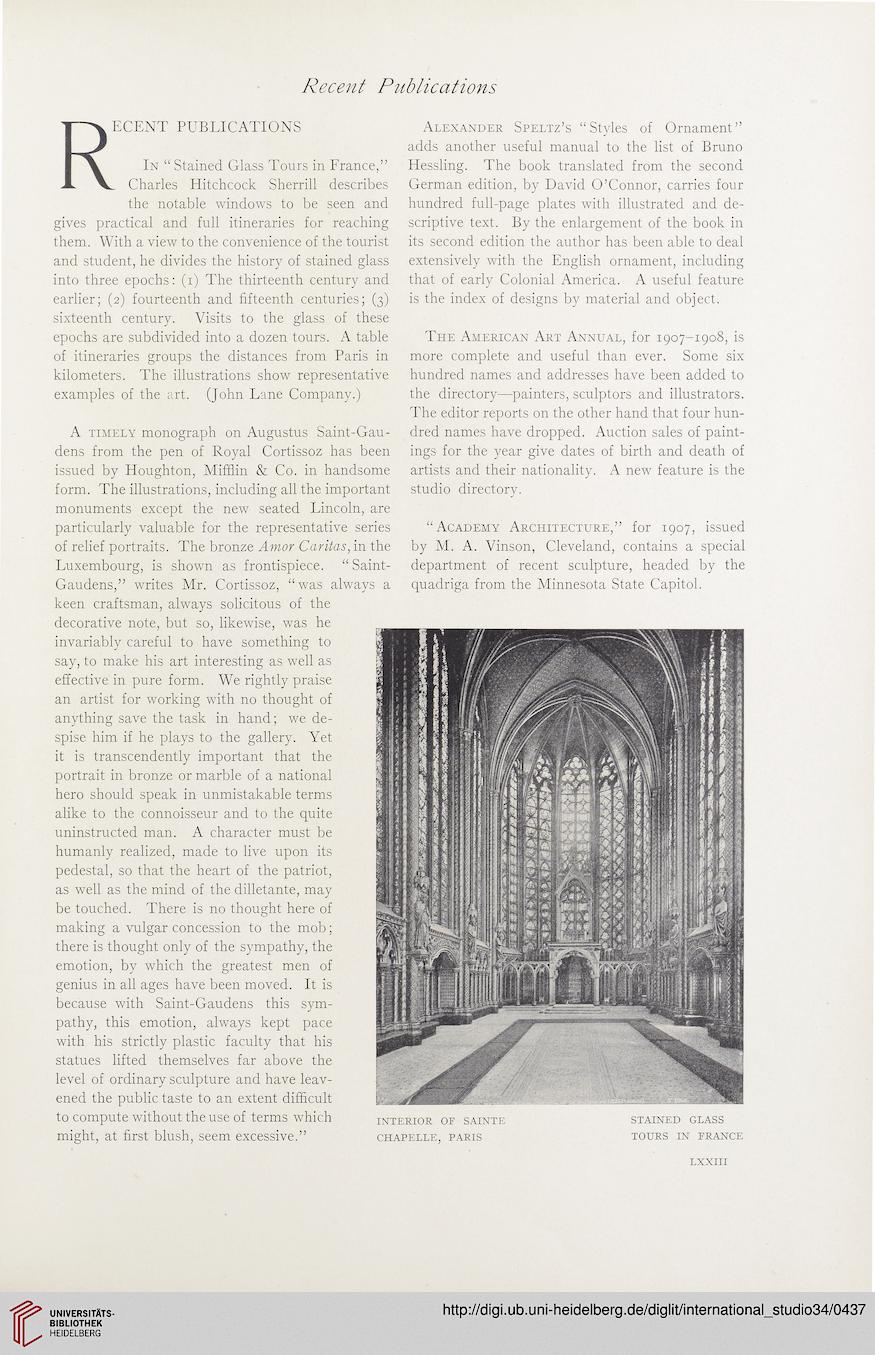 
Recent publications
In “ Stained Glass Tours in France,”
_ Charles Hitchcock Sherrill describes
the notable windows to be seen and
gives practical and full itineraries for reaching
them. With a view to the convenience of the tourist
and student, he divides the history of stained glass
into three epochs: (i) The thirteenth century and
earlier; (2) fourteenth and fifteenth centuries; (3)
sixteenth century. Visits to the glass of these
epochs are subdivided into a dozen tours. A table
of itineraries groups the distances from Paris in
kilometers. The illustrations show representative
examples of the art. (John Lane Company.)

A timely monograph on Augustus Saint-Gau-
dens from the pen of Royal Cortissoz has been
issued by Houghton, Mifflin Si Co. in handsome
form. The illustrations, including all the important
monuments except the new seated Lincoln, are
particularly valuable for the representative series
of relief portraits. The bronze Amor Caritas, in the
Luxembourg, is shown as frontispiece. “ Saint-
Gaudens,” writes Mr. Cortissoz, “was always a
keen craftsman, always solicitous of the
decorative note, but so, likewise, was he
invariably careful to have something to
say, to make his art interesting as well as
effective in pure form. We rightly praise
an artist for working with no thought of
anything save the task in hand; we de-
spise him if he plays to the gallery. Yet
it is transcendently important that the
portrait in bronze or marble of a national
hero should speak in unmistakable terms
alike to the connoisseur and to the quite
uninstructed man. A character must be
humanly realized, made to live upon its
pedestal, so that the heart of the patriot,
as well as the mind of the dilletante, may
be touched. There is no thought here of
making a vulgar concession to the mob;
there is thought only of the sympathy, the
emotion, by which the greatest men of
genius in all ages have been moved. It is
because with Saint-Gaudens this sym-
pathy, this emotion, always kept pace
with his strictly plastic faculty that his
statues lifted themselves far above the
level of ordinary sculpture and have leav-
ened the public taste to an extent difficult
to compute without the use of terms which interior oe sainte
might, at first blush, seem excessive.” charelle, paris

Alexander Speltz’s “Styles of Ornament”
adds another useful manual to the list of Bruno
Hessling. The book translated from the second
German edition, by David O’Connor, carries four
hundred full-page plates with illustrated and de-
scriptive text. By the enlargement of the book in
its second edition the author has been able to deal
extensively with the English ornament, including
that of early Colonial America. A useful feature
is the index of designs by material and object.
The American Art Annual, for 1907-1908, is
more complete and useful than ever. Some six
hundred names and addresses have been added to
the directory—painters, sculptors and illustrators.
The editor reports on the other hand that four hun-
dred names have dropped. Auction sales of paint-
ings for the year give dates of birth and death of
artists and their nationality. A new feature is the
studio directory.
“Academy Architecture,” for 1907, issued
by M. A. Vinson, Cleveland, contains a special
department of recent sculpture, headed by the
quadriga from the Minnesota State Capitol.