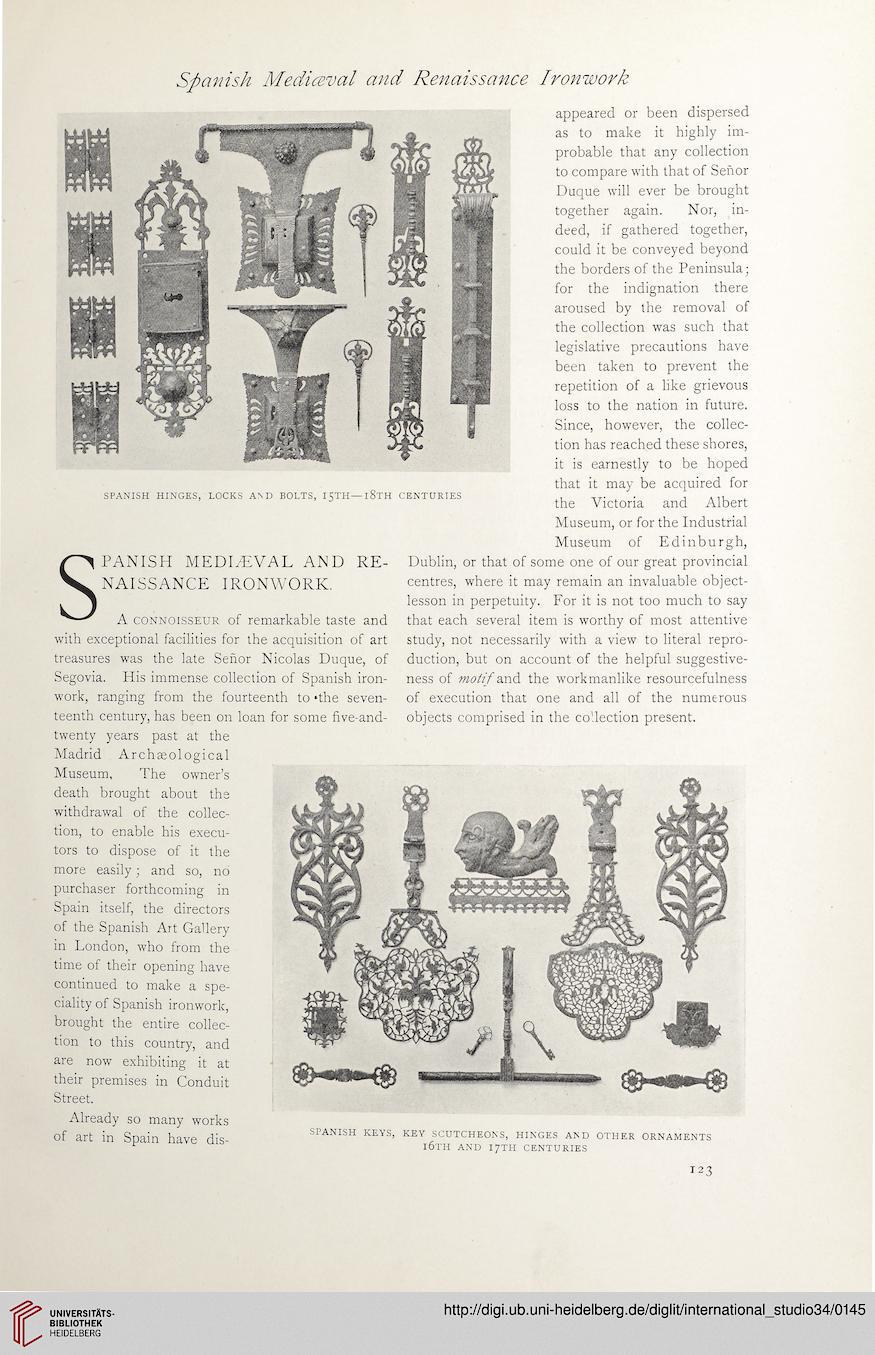 PANISH MEDIAEVAL AND RE-
NAISSANCE IRONWORK.

A connoisseur of remarkable taste and
with exceptional facilities for the acquisition of art
treasures was the late Senor Nicolas Duque, of
Segovia. His immense collection of Spanish iron-
work, ranging from the fourteenth to ‘the seven-
teenth century, has been on loan for some five-and-
twenty years past at the
Madrid Archaeological
Museum, The owner’s
death brought about the
withdrawal of the collec-
tion, to enable his execu-
tors to dispose of it the
more easily; and so, no
purchaser forthcoming in
Spain itself, the directors
of the Spanish Art Gallery
in London, who from the
time of their opening have
continued to make a spe-
ciality of Spanish ironwork,
brought the entire collec-
tion to this country, and
are now exhibiting it at
their premises in Conduit
Street.
Already so many works
of art in Spain have dis-

appeared or been dispersed
as to make it highly im-
probable that any collection
to compare with that of Senor
Duque will ever be brought
together again. Nor, in-
deed, if gathered together,
could it be conveyed beyond
the borders of the Peninsula;
for the indignation there
aroused by the removal of
the collection was such that
legislative precautions have
been taken to prevent the
repetition of a like grievous
loss to the nation in future.
Since, however, the collec-
tion has reached these shores,
it is earnestly to be hoped
that it may be acquired for
the Victoria and Albert
Museum, or for the Industrial
Museum of Edinburgh,
Dublin, or that of some one of our great provincial
centres, where it may remain an invaluable object-
lesson in perpetuity. For it is not too much to say
that each several item is worthy of most attentive
study, not necessarily with a view to literal repro-
duction, but on account of the helpful suggestive-
ness of motif and the workmanlike resourcefulness
of execution that one and all of the numerous
objects comprised in the collection present.