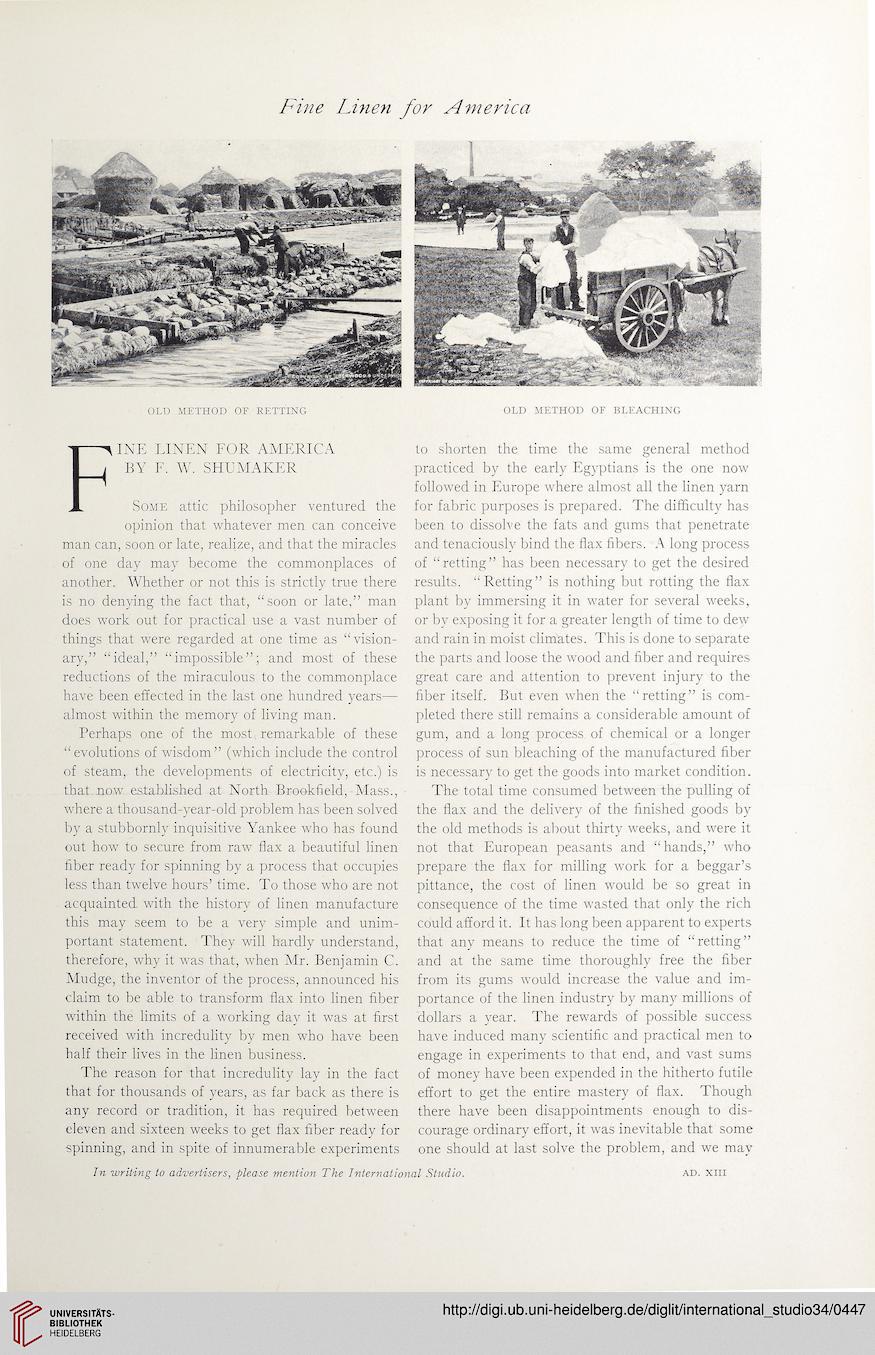 Some attic philosopher ventured the
opinion that whatever men can conceive
man can, soon or late, realize, and that the miracles
of one day may become the commonplaces of
another. Whether or not this is strictly true there
is no denying the fact that, “soon or late,” man
does work out for practical use a vast number of
things that were regarded at one time as “vision-
ary,” “ideal,” “impossible”; and most of these
reductions of the miraculous to the commonplace
have been effected in the last one hundred years—
almost within the memory of living man.
Perhaps one of the most remarkable of these
“evolutions of wisdom” (which include the control
of steam, the developments of electricitv, etc.) is
that now established at North Brookfield, Mass.,
where a thousand-year-old problem has been solved
by a stubbornly inquisitive Yankee who has found
out how to secure from raw flax a beautiful linen
fiber ready for spinning by a process that occupies
less than twelve hours’ time. To those who are not
acquainted with the history of linen manufacture
this may seem to be a very simple and unim-
portant statement. They will hardly understand,
therefore, why it was that, when Air. Benjamin C.
Mudge, the inventor of the process, announced his
claim to be able to transform flax into linen fiber
within the limits of a working day it was at first
received with incredulity by men who have been
half their lives in the linen business.
The reason for that incredulity lay in the fact
that for thousands of years, as far back as there is
any record or tradition, it has required between
eleven and sixteen weeks to get flax fiber ready for
spinning, and in spite of innumerable experiments

to shorten the time the same general method
practiced by the early Egyptians is the one now
followed in Europe where almost all the linen yarn
for fabric purposes is prepared. The difficulty has
been to dissolve the fats and gums that penetrate
and tenaciously bind the flax fibers. A long process
of “retting” has been necessary to get the desired
results. “Retting” is nothing but rotting the flax
plant by immersing it in water for several weeks,
or by exposing it for a greater length of time to dew
and rain in moist climates. This is done to separate
the parts and loose the wood and fiber and requires
great care and attention to prevent injury to the
fiber itself. But even when the “retting” is com-
pleted there still remains a considerable amount of
gum, and a long process of chemical or a longer
process of sun bleaching of the manufactured fiber
is necessary to get the goods into market condition.
The total time consumed between the pulling of
the flax and the delivery of the finished goods by
the old methods is about thirty weeks, and were it
not that European peasants and “hands,” who
prepare the flax for milling work for a beggar’s
pittance, the cost of linen would be so great in
consequence of the time wasted that only the rich
could afford it. It has long been apparent to experts
that any means to reduce the time of “retting”
and at the same time thoroughly free the fiber
from its gums would increase the value and im-
portance of the linen industry by many millions of
dollars a year. The rewards of possible success
have induced many scientific and practical men to
engage in experiments to that end, and vast sums
of money have been expended in the hitherto futile
effort to get the entire mastery of flax. Though
there have been disappointments enough to dis-
courage ordinary effort, it was inevitable that some
one should at last solve the problem, and we may

In writing to advertisers, please mention The International Studio.