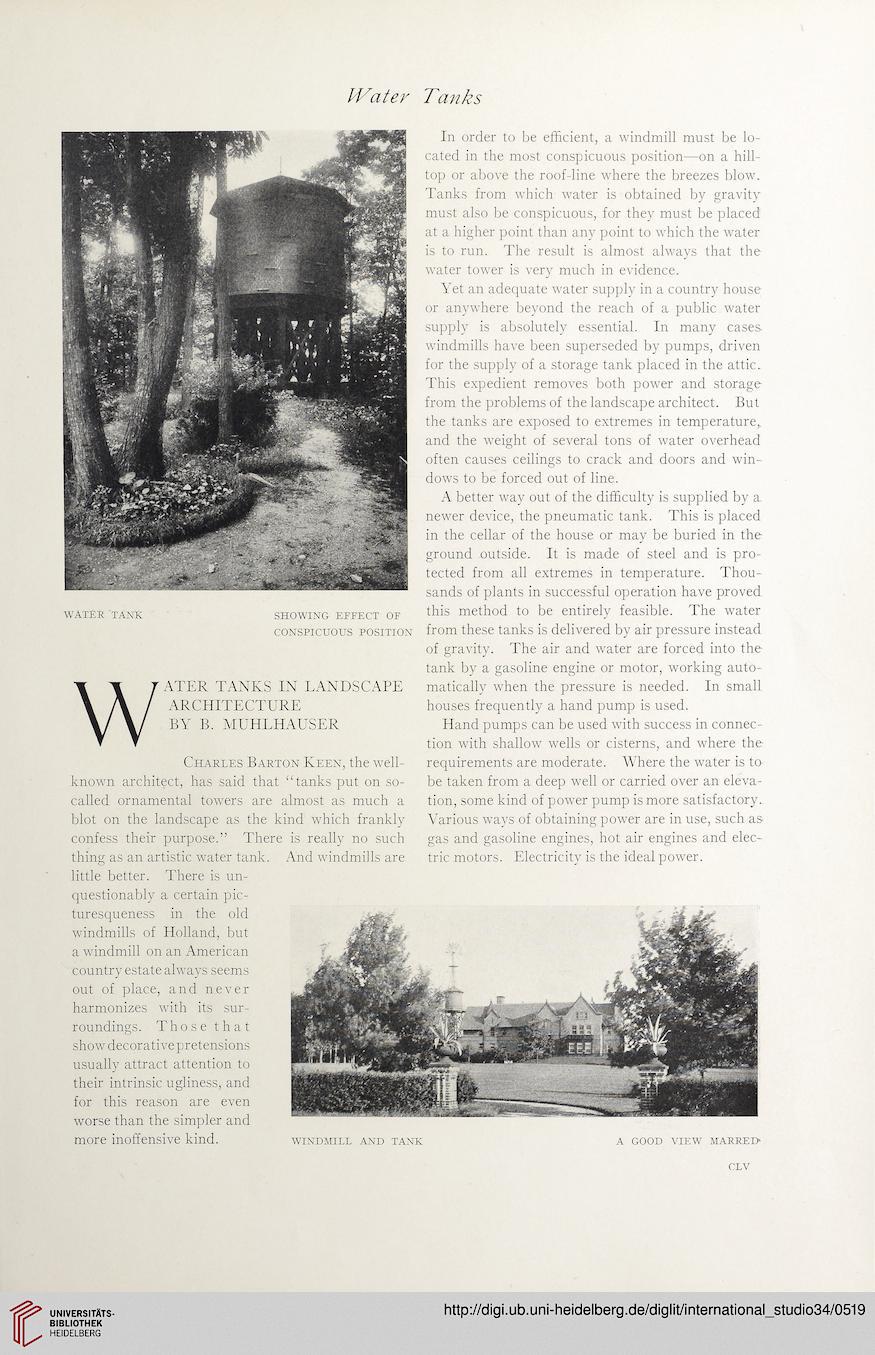 ATER TANKS IN LANDSCAPE
ARCHITECTURE
BY B. MUHLHAUSER

Charles Barton Keen, the well-
known architect, has said that “tanks put on so-
called ornamental towers are almost as much a
blot on the landscape as the kind which frankly
confess their purpose.” There is really no such
thing as an artistic water tank. And windmills are
little better. There is un-
questionably a certain pic-
turesqueness in the old
windmills of Holland, but
a windmill on an American
country estate always seems
out of place, and never
harmonizes with its sur-
roundings. Those that
show decorative pretensions
usually attract attention to
their intrinsic ugliness, and
for this reason are even
worse than the simpler and
more inoffensive kind. windmill and tank

In order to be efficient, a windmill must be lo-
cated in the most conspicuous position—on a hill-
top or above the roof-line where the breezes blow.
Tanks from which water is obtained by gravity
must also be conspicuous, for they must be placed
at a higher point than any point to which the water
is to run. The result is almost always that the
water tower is very much in evidence.
Yet an adequate water supply in a country house
or anywhere beyond the reach of a public water
supply is absolutely essential. In many cases,
windmills have been superseded by pumps, driven
for the supply of a storage tank placed in the attic.
This expedient removes both power and storage
from the problems of the landscape architect. But
the tanks are exposed to extremes in temperature,,
and the weight of several tons of water overhead
often causes ceilings to crack and doors and win-
dows to be forced out of line.
A better way out of the difficulty is supplied by a
newer device, the pneumatic tank. This is placed
in the cellar of the house or may be buried in the
ground outside. It is made of steel and is pro-
tected from all extremes in temperature. Thou-
sands of plants in successful operation have proved
this method to be entirely feasible. The water
from these tanks is delivered by air pressure instead
of gravity. The air and water are forced into the-
tank by a gasoline engine or motor, working auto-
matically when the pressure is needed. In small
houses frequently a hand pump is used.
Hand pumps can be used with success in connec-
tion with shallow wells or cisterns, and where the
requirements are moderate. Where the water is to-
be taken from a deep well or carried over an eleva-
tion, some kind of power pump is more satisfactory.
Various ways of obtaining power are in use, such as
gas and gasoline engines, hot air engines and elec-
tric motors. Electricity is the ideal power.