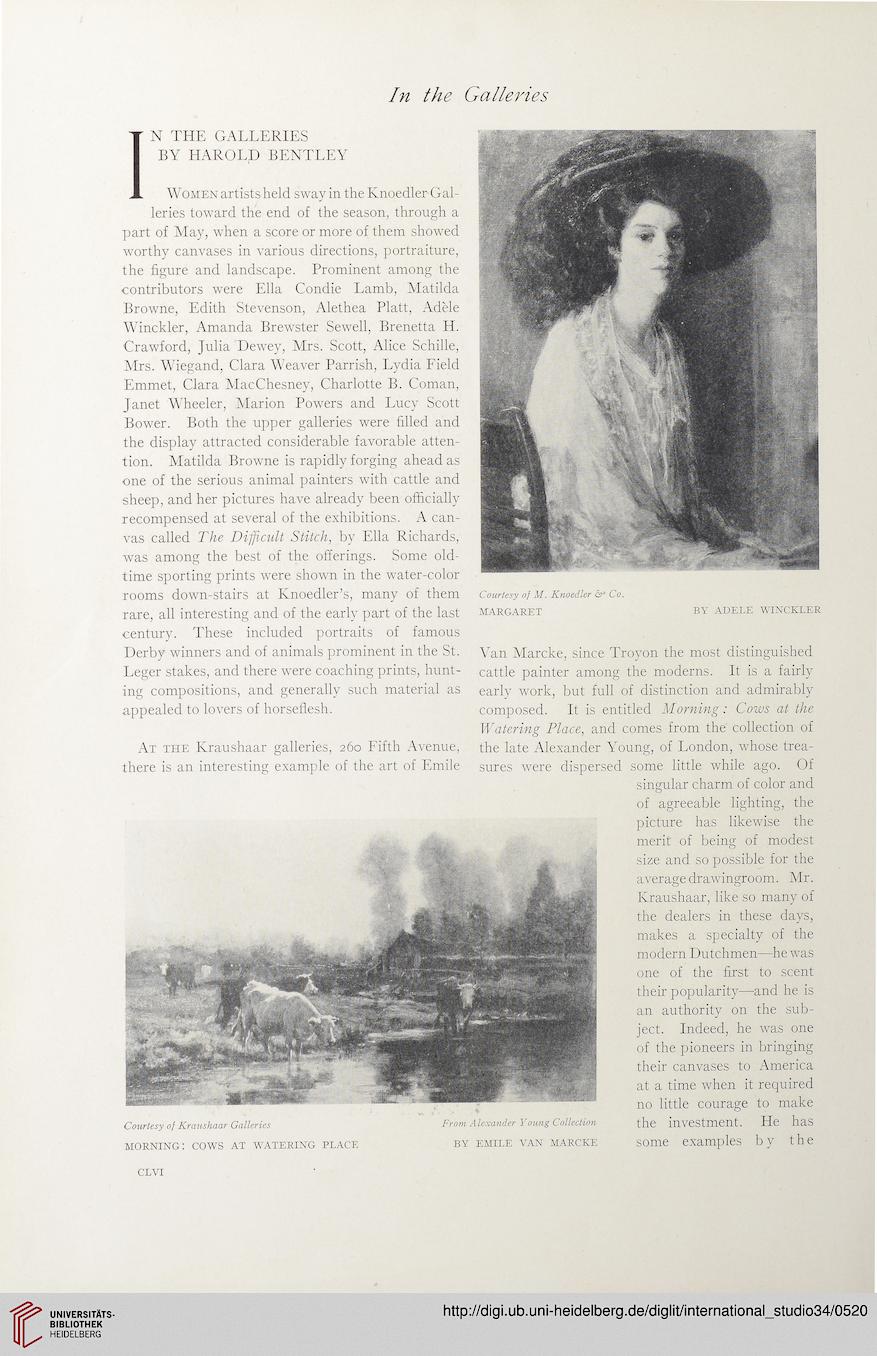 N THE GALLERIES
BY HAROLD BENTLEY
Women artists held sway in the Knoedler Gal-
leries toward the end of the season, through a
part of May, when a score or more of them showed
worthy canvases in various directions, portraiture,
the figure and landscape. Prominent among the
contributors were Ella Condie Lamb, Matilda
Browne, Edith Stevenson, Alethea Platt, Adele
Winckler, Amanda Brewster Sewell, Brenetta H.
•Crawford, Julia Dewey, Mrs. Scott, Alice Schille,
Airs. Wiegand, Clara Weaver Parrish, Lydia Field
Emmet, Clara AlacChesney, Charlotte B. Coman,
Janet Wheeler, Alarion Powers and Lucy Scott
Bower. Both the upper galleries were filled and
the display attracted considerable favorable atten-
tion. Alatilda Browne is rapidly forging ahead as
one of the serious animal painters with cattle and
sheep, and her pictures have already been officially
recompensed at several of the exhibitions. A can-
vas called The Difficult Stitch, by Ella Richards,
was among the best of the offerings. Some old-
time sporting prints were shown in the water-color
rooms down-stairs at Knoedler’s, many of them
rare, all interesting and of the early part of the last
century. These included portraits of famous
Derby winners and of animals prominent in the St.
Leger stakes, and there were coaching prints, hunt-
ing compositions, and generally such material as
appealed to lovers of horseflesh.
At the Kraushaar galleries, 260 Fifth Avenue,
there is an interesting example of the art of Emile

Van Marcke, since Troyon the most distinguished
cattle painter among the moderns. It is a fairly
early work, but full of distinction and admirably
composed. It is entitled Morning: Cows at the
Watering Place, and comes from the collection of
the late Alexander Young, of London, whose trea-
sures were dispersed some little while ago. Of
singular charm of color and
of agreeable lighting, the
picture has likewise the
merit of being of modest
size and so possible for the
average drawingroom. Mr.
Kraushaar, like so many of
the dealers in these days,
makes a specialty of the
modern Dutchmen—he was
one of the first to scent
their popularity—and he is
an authority on the sub-
ject. Indeed, he was one
of the pioneers in bringing
their canvases to America
at a time when it required
no little courage to make
the investment. He has
some examples by the