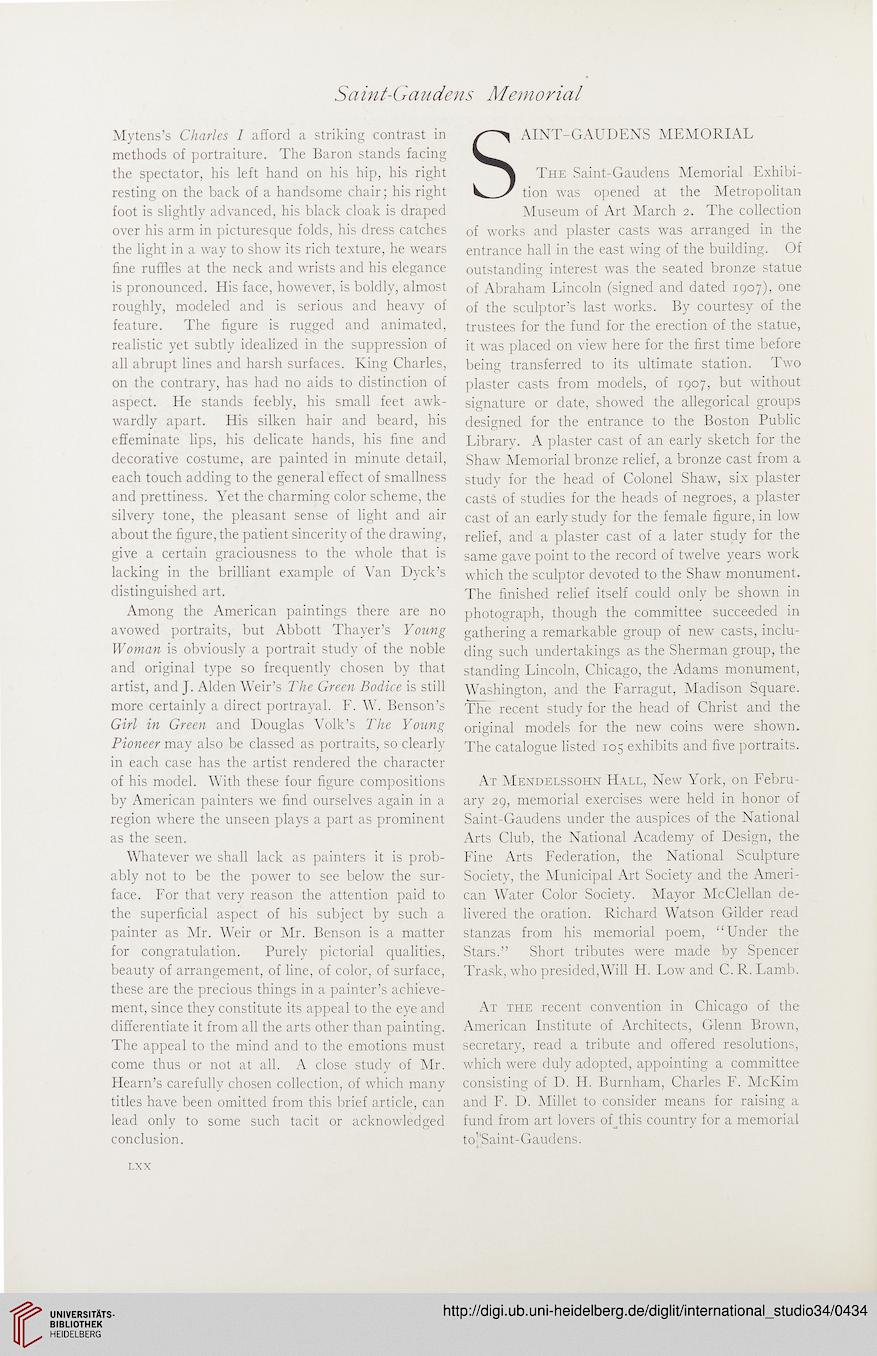 Mytens’s Charles I afford a striking contrast in
methods of portraiture. The Baron stands facing
the spectator, his left hand on his hip, his right
resting on the back of a handsome chair; his right
foot is slightly advanced, his black cloak is draped
over his arm in picturesque folds, his dress catches
the light in a way to show its rich texture, he wears
fine ruffles at the neck and wrists and his elegance
is pronounced. His face, however, is boldly, almost
roughly, modeled and is serious and heavy of
feature. The figure is rugged and animated,
realistic yet subtly idealized in the suppression of
all abrupt lines and harsh surfaces. King Charles,
on the contrary, has had no aids to distinction of
aspect. He stands feebly, his small feet awk-
wardly apart. His silken hair and beard, his
effeminate lips, his delicate hands, his fine and
decorative costume, are painted in minute detail,
each touch adding to the general effect of smallness
and prettiness. Yet the charming color scheme, the
silvery tone, the pleasant sense of light and air
about the figure, the patient sincerity of the drawing,
give a certain graciousness to the whole that is
lacking in the brilliant example of Van Dyck’s
distinguished art.
Among the American paintings there are no
avowed portraits, but Abbott Thayer’s Young
Woman is obviously a portrait study of the noble
and original type so frequently chosen by that
artist, and J. Alden Weir’s The Green Bodice is still
more certainly a direct portrayal. F. W. Benson’s
Girl in Green and Douglas Volk’s The Young
Pioneer may also be classed as portraits, so clearly
in each case has the artist rendered the character
of his model. With these four figure compositions
by American painters we find ourselves again in a
region where the unseen plays a part as prominent
as the seen.
Whatever we shall lack as painters it is prob-
ably not to be the power to see below the sur-
face. For that very reason the attention paid to
the superficial aspect of his subject by such a
painter as Mr. Weir or Mr. Benson is a matter
for congratulation. Purely pictorial qualities,
beauty of arrangement, of line, of color, of surface,
these are the precious things in a painter’s achieve-
ment, since they constitute its appeal to the eye and
differentiate it from all the arts other than painting.
The appeal to the mind and to the emotions must
come thus or not at all. A close study of Mr.
Hearn’s carefully chosen collection, of which many
titles have been omitted from this brief article, can
lead only to some such tacit or acknowledged
conclusion.

SAINT-GAUDENS MEMORIAL
The Saint-Gaudens Memorial Exhibi-
tion was opened at the Metropolitan
Museum of Art March 2. The collection
of works and plaster casts was arranged in the
entrance hall in the east wing of the building. Of
outstanding interest was the seated bronze statue
of Abraham Lincoln (signed and dated 1907), one
of the sculptor’s last works. By courtesy of the
trustees for the fund for the erection of the statue,
it was placed on view here for the first time before
being transferred to its ultimate station. Two
plaster casts from models, of 1907, but without
signature or date, showed the allegorical groups
designed for the entrance to the Boston Public

Library. A plaster cast of an early sketch for the
Shaw Memorial bronze relief, a bronze cast from a
study for the head of Colonel Shaw, six plaster
casts of studies for the heads of negroes, a plaster
cast of an early study for the female figure, in low
relief, and a plaster cast of a later study for the
same gave point to the record of twelve years work
which the sculptor devoted to the Shaw monument.
The finished relief itself could only be shown in
photograph, though the committee succeeded in
gathering a remarkable group of new casts, inclu-
ding such undertakings as the Sherman group, the
standing Lincoln, Chicago, the Adams monument,
Washington, and the Farragut, Madison Square.
The recent study for the head of Christ and the
original models for the new coins were shown.
The catalogue listed 105 exhibits and five portraits.

At Mendelssohn Hall, New York, on Febru-
ary 29, memorial exercises were held in honor of
Saint-Gaudens under the auspices of the National
Arts Club, the National Academy of Design, the
Fine Arts Federation, the National Sculpture
Society, the Municipal Art Society and the Ameri-
can Water Color Society. Mayor McClellan de-
livered the oration. Richard Watson Gilder read
stanzas from his memorial poem, “Under the
Stars.” Short tributes were made by Spencer
Trask, who presided,Will H. Low and C. R. Lamb.

At the recent convention in Chicago of the
American Institute of Architects, Glenn Brown,
secretary, read a tribute and offered resolutions,
which were duly adopted, appointing a committee
consisting of D. H. Burnham, Charles F. McKim
and F. D. Millet to consider means for raising a
fund from art lovers of this country for a memorial
to (Saint-Gaudens.