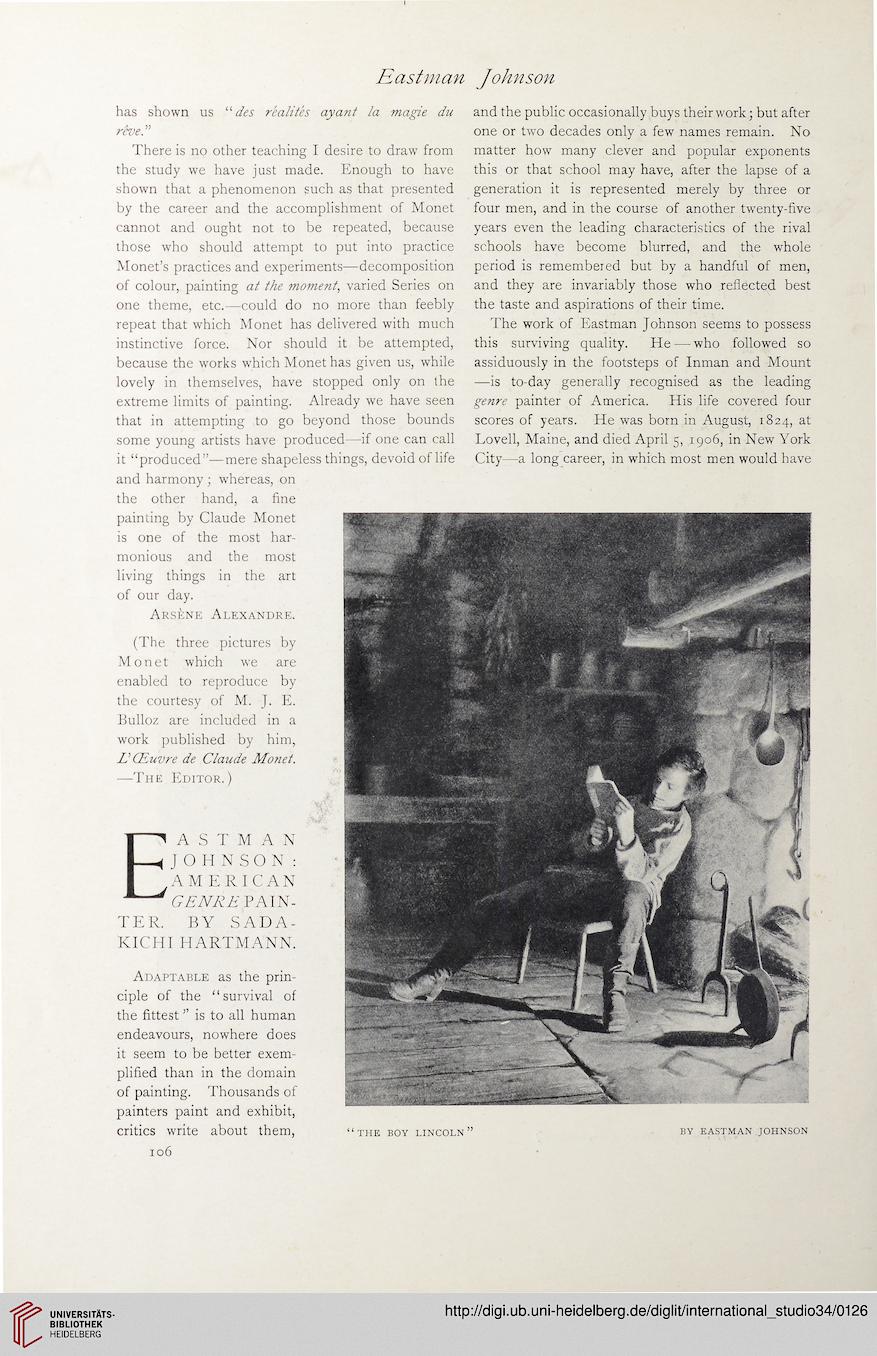 (The three pictures by
Monet which we are
enabled to reproduce by
the courtesy of M. J. E.
Bulloz are included in a
work published by him,
IS CEuvre de Claude Monet.
—The Editor.)

Eastman
JOHNSON :
AMERICAN
GENRE PAIN-
TER. BY SADA-
KICHI HARTMANN.
Adaptable as the prin-
ciple of the “survival of
the fittest ’’ is to all human
endeavours, nowhere does
it seem to be better exem-
plified than in the domain
of painting. Thousands of
painters paint and exhibit,
critics write about them, “the boy Lincoln


has shown us “ des r’ealit'es ay ant la magie du
revel’
There is no other teaching I desire to draw from
the study we have just made. Enough to have
shown that a phenomenon such as that presented
by the career and the accomplishment of Monet
cannot and ought not to be repeated, because
those who should attempt to put into practice
Monet’s practices and experiments—decomposition
of colour, painting at the moment, varied Series on
one theme, etc.—could do no more than feebly
repeat that which Monet has delivered with much
instinctive force. Nor should it be attempted,
because the works which Monet has given us, while
lovely in themselves, have stopped only on the
extreme limits of painting. Already we have seen
that in attempting to go beyond those bounds
some young artists have produced—if one can call
it “produced”—mere shapeless things, devoid of life
and harmony ; whereas, on
the other hand, a fine
painting by Claude Monet
is one of the most har-
monious and the most
living things in the art
of our day.
Arsene Alexandre.

and the public occasionally buys their work; but after
one or two decades only a few names remain. No
matter how many clever and popular exponents
this or that school may have, after the lapse of a
generation it is represented merely by three or
four men, and in the course of another twenty-five
years even the leading characteristics of the rival
schools have become blurred, and the whole
period is remembered but by a handful of men,
and they are invariably those who reflected best
the taste and aspirations of their time.
The work of Eastman Johnson seems to possess
this surviving quality. He —- who followed so
assiduously in the footsteps of Inman and Mount
—is to-day generally recognised as the leading
genre painter of America. His life covered four
scores of years. He was born in August, 1824, at
Lovell, Maine, and died April 5, 1906, in New York
City—a long career, in which most men would have