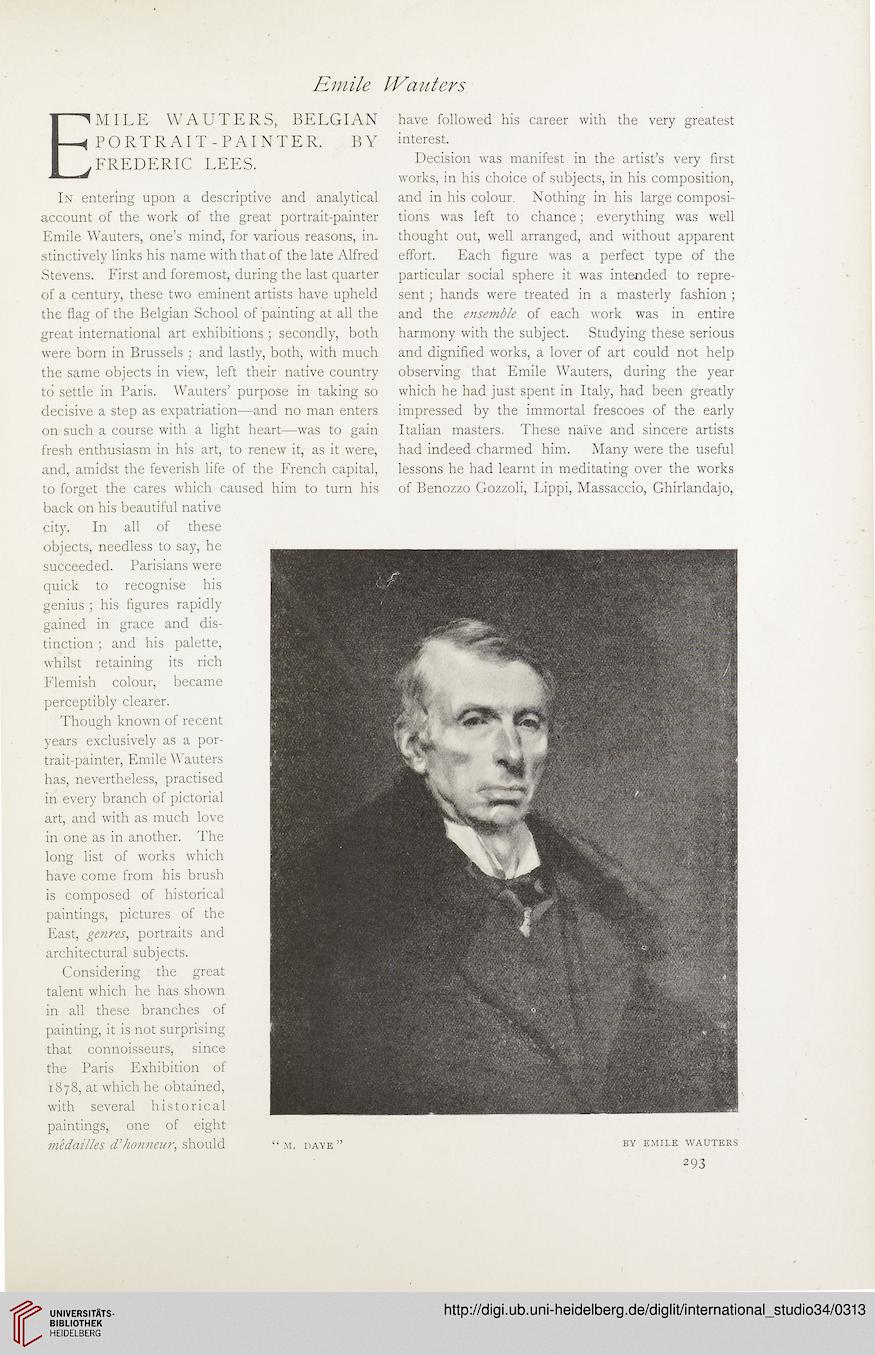 Emile wauters, Belgian
PORTRAIT-PAINTER. BY
FREDERIC LEES.
In entering upon a descriptive and analytical
account of the work of the great portrait-painter
Emile Wauters, one’s mind, for various reasons, in-
stinctively links his name with that of the late Alfred
Stevens. First and foremost, during the last quarter
of a century, these two eminent artists have upheld
the flag of the Belgian School of painting at all the
great international art exhibitions ; secondly, both
were born in Brussels ; and lastly, both, with much
the same objects in view, left their native country
to settle in Paris. Wauters’ purpose in taking so
decisive a step as expatriation—and no man enters
on such a course with a light heart—was to gain
fresh enthusiasm in his art, to renew it, as it were,
and, amidst the feverish life of the French capital,
to forget the cares which caused him to turn his
back on his beautiful native
city. In all of these
objects, needless to say, he
succeeded. Parisians were
quick to recognise his
genius ; his figures rapidly
gained in grace and dis-
tinction • and his palette,
whilst retaining its rich
Flemish colour, became
perceptibly clearer.
Though known of recent
years exclusively as a por-
trait-painter, Emile Wauters
has, nevertheless, practised
in every branch of pictorial
art, and with as much love
in one as in another. The
long list of works which
have come from his brush
is composed of historical
paintings, pictures of the
East, genres, portraits and
architectural subjects.
Considering the great
talent which he has shown
in all these branches of
painting, it is not surprising
that connoisseurs, since
the Paris Exhibition of
1878, at which he obtained,
with several historical
paintings, one of eight
m'edailles cThonneur, should “ m. daye ”

have followed his career with the very greatest
interest.
Decision was manifest in the artist’s very first
works, in his choice of subjects, in his composition,
and in his colour. Nothing in his large composi-
tions was left to chance; everything was well
thought out, well arranged, and without apparent
effort. Each figure was a perfect type of the
particular social sphere it was intended to repre-
sent ; hands were treated in a masterly fashion ;
and the ensemble of each work was in entire
harmony with the subject. Studying these serious
and dignified works, a lover of art could not help
observing that Emile Wauters, during the year
which he had just spent in Italy, had been greatly
impressed by the immortal frescoes of the early
Italian masters. These naive and sincere artists
had indeed charmed him. Many were the useful
lessons he had learnt in meditating over the works
of Benozzo Gozzoli, Lippi, Massaccio, Ghirlandajo,