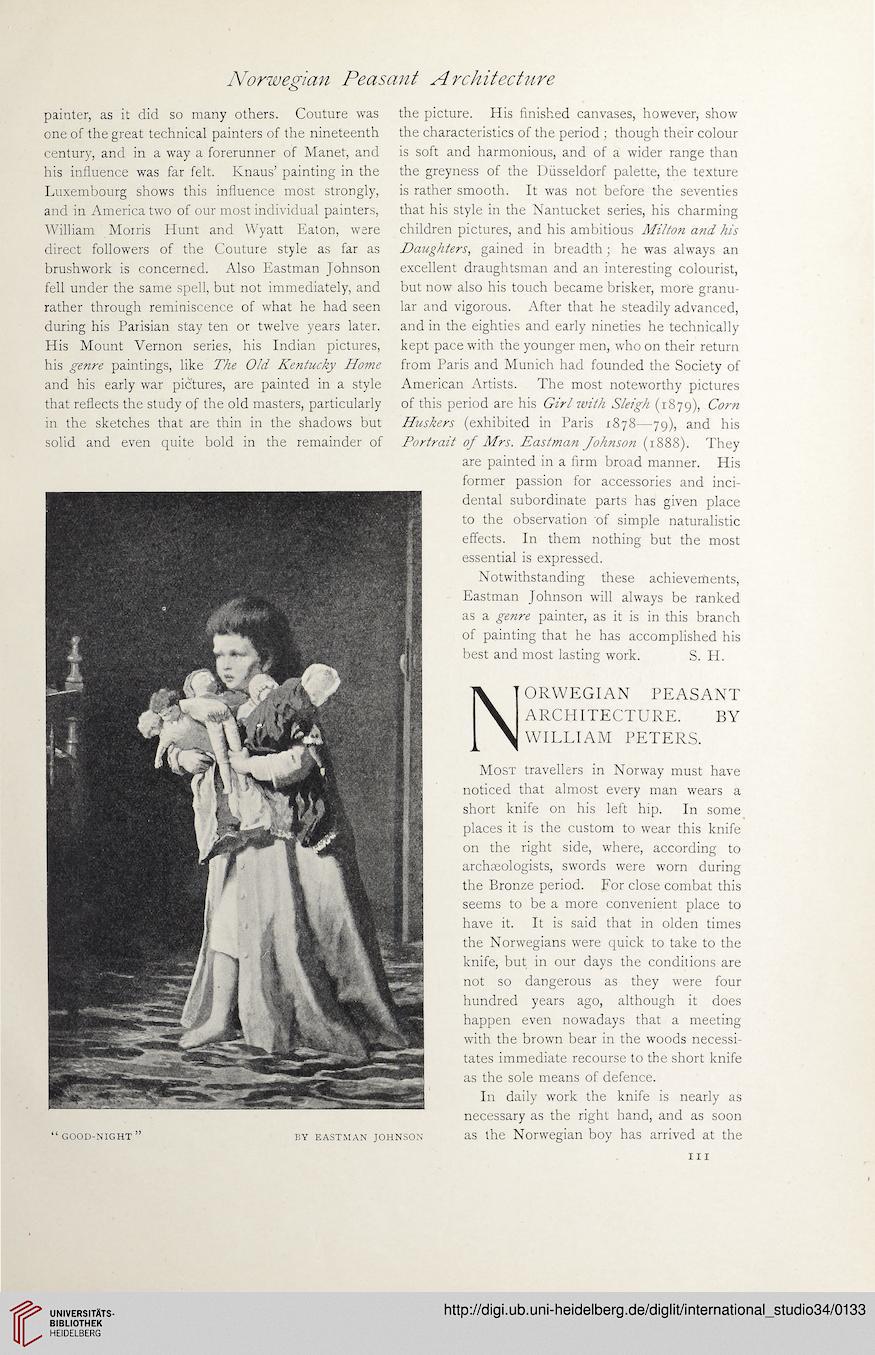 painter, as it did so many others. Couture was
one of the great technical painters of the nineteenth
century, and in a way a forerunner of Manet, and
his influence was far felt. Knaus’ painting in the
Luxembourg shows this influence most strongly,
and in America two of our most individual painters,
William Morris Hunt and Wyatt Eaton, were
direct followers of the Couture style as far as
brushwork is concerned. Also Eastman Johnson
fell under the same spell, but not immediately, and
rather through reminiscence of what he had seen
during his Parisian stay ten or twelve years later.
His Mount Vernon series, his Indian pictures,
his genre paintings, like The Old Kentucky Home
and his early war pictures, are painted in a style
that reflects the study of the old masters, particularly
in the sketches that are thin in the shadows but
solid and even quite bold in the remainder of

the picture. His finished canvases, however, show
the characteristics of the period ; though their colour
is soft and harmonious, and of a wider range than
the greyness of the Diisseldorf palette, the texture
is rather smooth. It was not before the seventies
that his style in the Nantucket series, his charming
children pictures, and his ambitious Milton and his
Daughters, gained in breadth; he was always an
excellent draughtsman and an interesting colourist,
but now also his touch became brisker, more granu-
lar and vigorous. After that he steadily advanced,
and in the eighties and early nineties he technically
kept pace with the younger men, -who on their return
from Paris and Munich had founded the Society of
American Artists. The most noteworthy pictures
of this period are his Girl with Sleigh (1879), Corn
Huskers (exhibited in Paris 1878—79), and his
Portrait of Mrs. Eastman Johnson (1888). They
are painted in a firm broad manner. His
former passion for accessories and inci-
dental subordinate parts has given place
to the observation of simple naturalistic
effects. In them nothing but the most
essential is expressed.
Notwithstanding these achievements,
Eastman Johnson will always be ranked
as a genre painter, as it is in this branch
of painting that he has accomplished his
best and most lasting work. S. H.
ORWEGIAN PEASANT
ARCHITECTURE. BY
WILLIAM PETERS.
Most travellers in Norway must have
noticed that almost every man wears a
short knife on his left hip. In some
places it is the custom to wear this knife
on the right side, where, according to
archaeologists, swords were worn during
the Bronze period. For close combat this
seems to be a more convenient place to
have it. It is said that in olden times
the Norwegians were quick to take to the
knife, but in our days the conditions are
not so dangerous as they were four
hundred years ago, although it does
happen even nowadays that a meeting
with the brown bear in the woods necessi-
tates immediate recourse to the short knife
as the sole means of defence.
In daily work the knife is nearly as
necessary as the right hand, and as soon
as the Norwegian boy has arrived at the