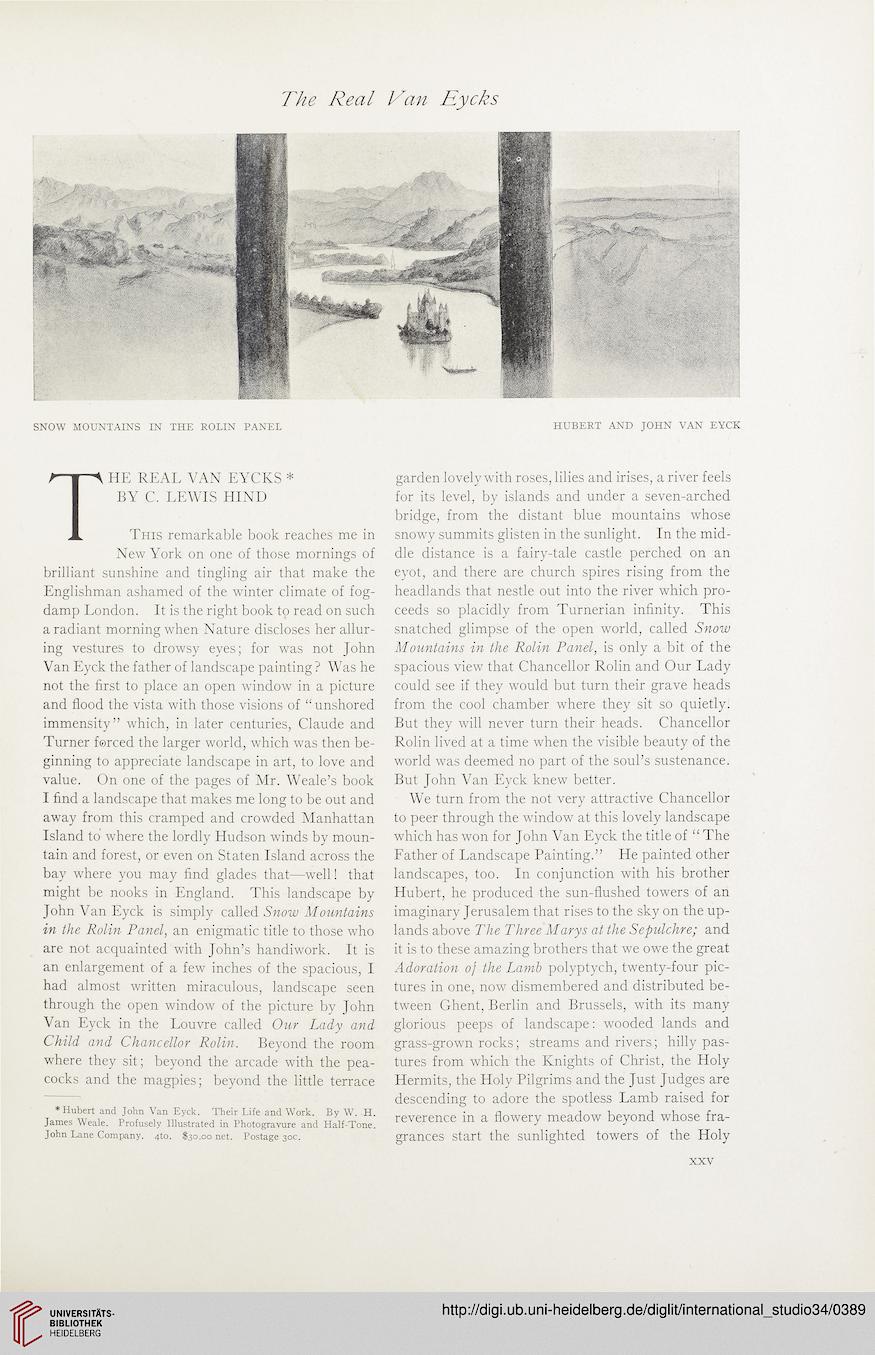 
SNOW MOUNTAINS IN THE ROLIN PANEL

This remarkable book reaches me in
New York on one of those mornings of
brilliant sunshine and tingling air that make the
Englishman ashamed of the winter climate of fog-
damp London. It is the right book to read on such
a radiant morning when Nature discloses her allur-
ing vestures to drowsy eyes; for was not John
Van Eyck the father of landscape painting ? Was he
not the first to place an open window in a picture
and flood the vista with those visions of “unshored
immensity” which, in later centuries, Claude and
Turner forced the larger world, which was then be-
ginning to appreciate landscape in art, to love and
value. On one of the pages of Mr. Weale’s book
I find a landscape that makes me long to be out and
away from this cramped and crowded Manhattan
Island to where the lordly Hudson winds by moun-
tain and forest, or even on Staten Island across the
bay where you may find glades that—well! that
might be nooks in England. This landscape by
John Van Eyck is simply called Snow Mountains
in the Rolin Panel, an enigmatic title to those who
are not acquainted with John’s handiwork. It is
an enlargement of a few inches of the spacious, I
had almost written miraculous, landscape seen
through the open window of the picture by John
Van Eyck in the Louvre called Our Lady and
Child and Chancellor Rolin. Beyond the room
where they sit; beyond the arcade with the pea-
cocks and the magpies; beyond the little terrace

garden lovely with roses, lilies and irises, a river feels
for its level, by islands and under a seven-arched
bridge, from the distant blue mountains whose
snowy summits glisten in the sunlight. In the mid-
dle distance is a fairy-tale castle perched on an
eyot, and there are church spires rising from the
headlands that nestle out into the river which pro-
ceeds so placidly from Turnerian infinity. This
snatched glimpse of the open world, called Snow
Mountains in the Rolin Panel, is only a bit of the
spacious view that Chancellor Rolin and Our Lady
could see if they would but turn their grave heads
from the cool chamber where they sit so quietly.
But they will never turn their heads. Chancellor
Rolin lived at a time when the visible beauty of the
world was deemed no part of the soul’s sustenance.
But John Van Eyck knew better.
We turn from the not very attractive Chancellor
to peer through the window at this lovely landscape
which has won for John Van Eyck the title of “ The
Father of Landscape Painting.” He painted other
landscapes, too. In conjunction with his brother
Hubert, he produced the sun-flushed towers of an
imaginary Jerusalem that rises to the sky on the up-
lands above The Three Marys at the Sepulchre; and
it is to these amazing brothers that we owe the great
Adoration of the Lamb polyptych, twenty-four pic-
tures in one, now dismembered and distributed be-
tween Ghent, Berlin and Brussels, with its many
glorious peeps of landscape: wooded lands and
grass-grown rocks; streams and rivers; hilly pas-
tures from which the Knights of Christ, the Holy
Hermits, the Holy Pilgrims and the Just Judges are
descending to adore the spotless Lamb raised for
reverence in a flowery meadow beyond whose fra-
grances start the sunlighted towers of the Holy