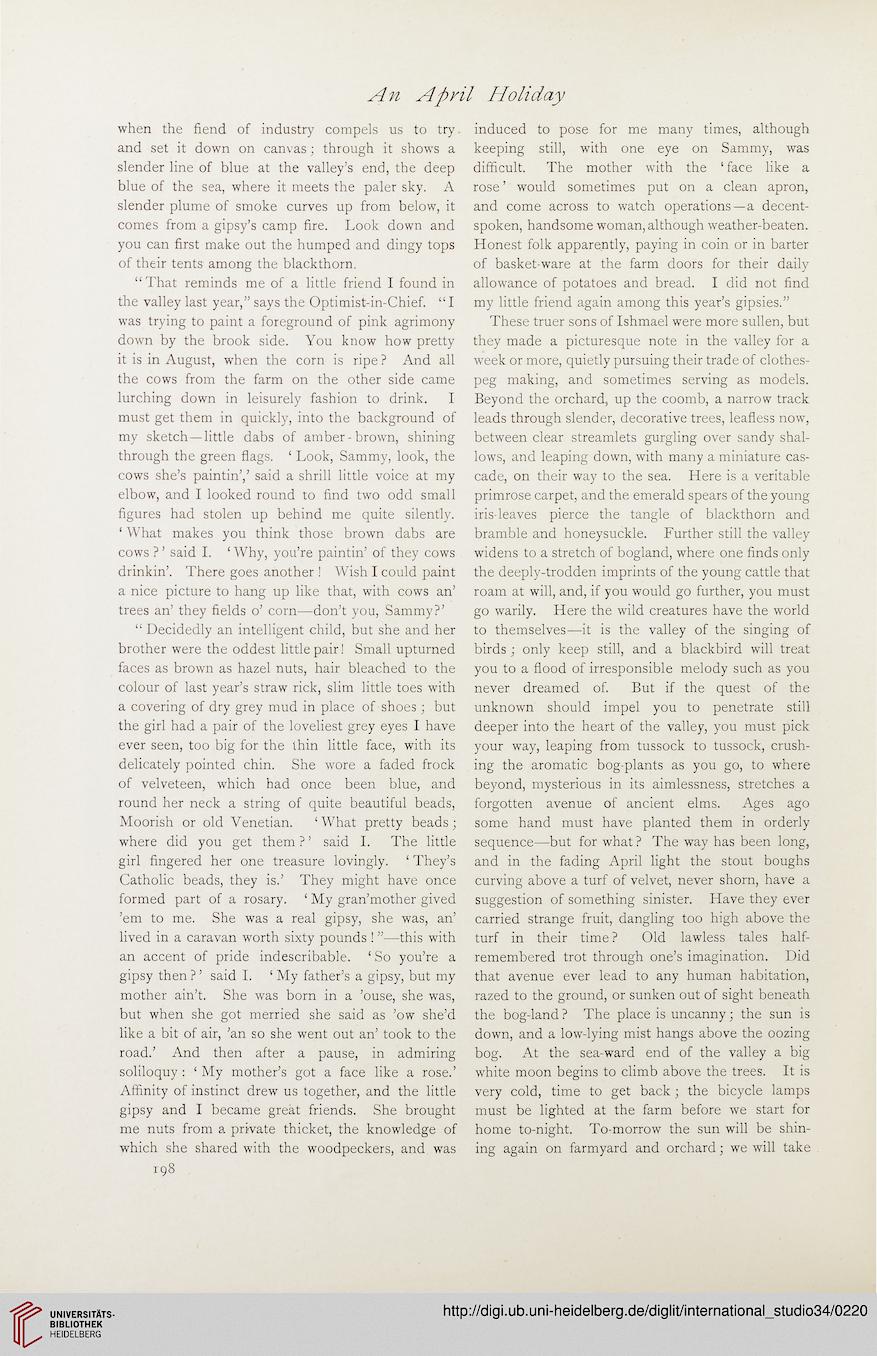 when the fiend of industry compels us to try
and set it down on canvas; through it shows a
slender line of blue at the valley’s end, the deep
blue of the sea, where it meets the paler sky. A
slender plume of smoke curves up from below, it
comes from a gipsy’s camp fire. Look down and
you can first make out the humped and dingy tops
of their tents among the blackthorn.
“ That reminds me of a little friend I found in
the valley last year,” says the Optimist-in-Chief. “I
was trying to paint a foreground of pink agrimony
down by the brook side. You know how pretty
it is in August, when the corn is ripe? And all
the cows from the farm on the other side came
lurching down in leisurely fashion to drink. I
must get them in quickly, into the background of
my sketch—little dabs of amber-brown, shining
through the green flags. ‘ Look, Sammy, look, the
cows she’s paintin’,’ said a shrill little voice at my
elbow, and I looked round to find two odd small
figures had stolen up behind me quite silently.
‘ What makes you think those brown dabs are
cows ? ’ said I. ‘ Why, you’re paintin’ of they cows
drinkin’. There goes another ! Wish I could paint
a nice picture to hang up like that, with cows an’
trees an’ they fields o’ corn—don’t you, Sammy?’
“ Decidedly an intelligent child, but she and her
brother were the oddest little pair! Small upturned
faces as brown as hazel nuts, hair bleached to the
colour of last year’s straw rick, slim little toes with
a covering of dry grey mud in place of shoes; but
the girl had a pair of the loveliest grey eyes I have
ever seen, too big for the thin little face, with its
delicately pointed chin. She wore a faded frock
of velveteen, which had once been blue, and
round her neck a string of quite beautiful beads,
Moorish or old Venetian. ‘ What pretty beads ;
where did you get them ? ’ said I. The little
girl fingered her one treasure lovingly. ‘ They’s
Catholic beads, they is.’ They might have once
formed part of a rosary. ‘ My gran’mother gived
’em to me. She was a real gipsy, she was, an’
lived in a caravan worth sixty pounds ! ”—this with
an accent of pride indescribable. ‘ So you’re a
gipsy then ?’ said I. ‘ My father’s a gipsy, but my
mother ain’t. She was born in a ’ouse, she was,
but when she got merried she said as ’ow she’d
like a bit of air, ’an so she went out an’ took to the
road.’ And then after a pause, in admiring
soliloquy : ‘ My mother’s got a face like a rose.’
Affinity of instinct drew us together, and the little
gipsy and I became great friends. She brought
me nuts from a private thicket, the knowledge of
which she shared with the woodpeckers, and was

induced to pose for me many times, although
keeping still, with one eye on Sammy, was
difficult. The mother with the ‘ face like a
rose ’ would sometimes put on a clean apron,
and come across to watch operations —a decent-
spoken, handsome woman, although weather-beaten.
Honest folk apparently, paying in coin or in barter
of basket-ware at the farm doors for their daily
allowance of potatoes and bread. I did not find
my little friend again among this year’s gipsies.”
These truer sons of Ishmael were more sullen, but
they made a picturesque note in the valley for a
week or more, quietly pursuing their trade of clothes-
peg making, and sometimes serving as models.
Beyond the orchard, up the coomb, a narrow track
leads through slender, decorative trees, leafless now,
between clear streamlets gurgling over sandy shal-
lows, and leaping down, with many a miniature cas-
cade, on their way to the sea. Here is a veritable
primrose carpet, and the emerald spears of the young
iris-leaves pierce the tangle of blackthorn and
bramble and honeysuckle. Further still the valley
widens to a stretch of bogland, where one finds only
the deeply-trodden imprints of the young cattle that
roam at will, and, if you would go further, you must
go warily. Here the wild creatures have the world
to themselves—it is the valley of the singing of
birds ; only keep still, and a blackbird will treat
you to a flood of irresponsible melody such as you
never dreamed of. But if the quest of the
unknown should impel you to penetrate still
deeper into the heart of the valley, you must pick
your way, leaping from tussock to tussock, crush-
ing the aromatic bog-plants as you go, to where
beyond, mysterious in its aimlessness, stretches a
forgotten avenue of ancient elms. Ages ago
some hand must have planted them in orderly
sequence—but for what ? The way has been long,
and in the fading April light the stout boughs
curving above a turf of velvet, never shorn, have a
suggestion of something sinister. Have they ever
carried strange fruit, dangling too high above the
turf in their time ? Old lawless tales half-
remembered trot through one’s imagination. Did
that avenue ever lead to any human habitation,
razed to the ground, or sunken out of sight beneath
the bog-land ? The place is uncanny; the sun is
down, and a low-lying mist hangs above the oozing
bog. At the sea-ward end of the valley a big
white moon begins to climb above the trees. It is
very cold, time to get back; the bicycle lamps
must be lighted at the farm before we start for
home to-night. To-morrow the sun will be shin-
ing again on farmyard and orchard; we will take