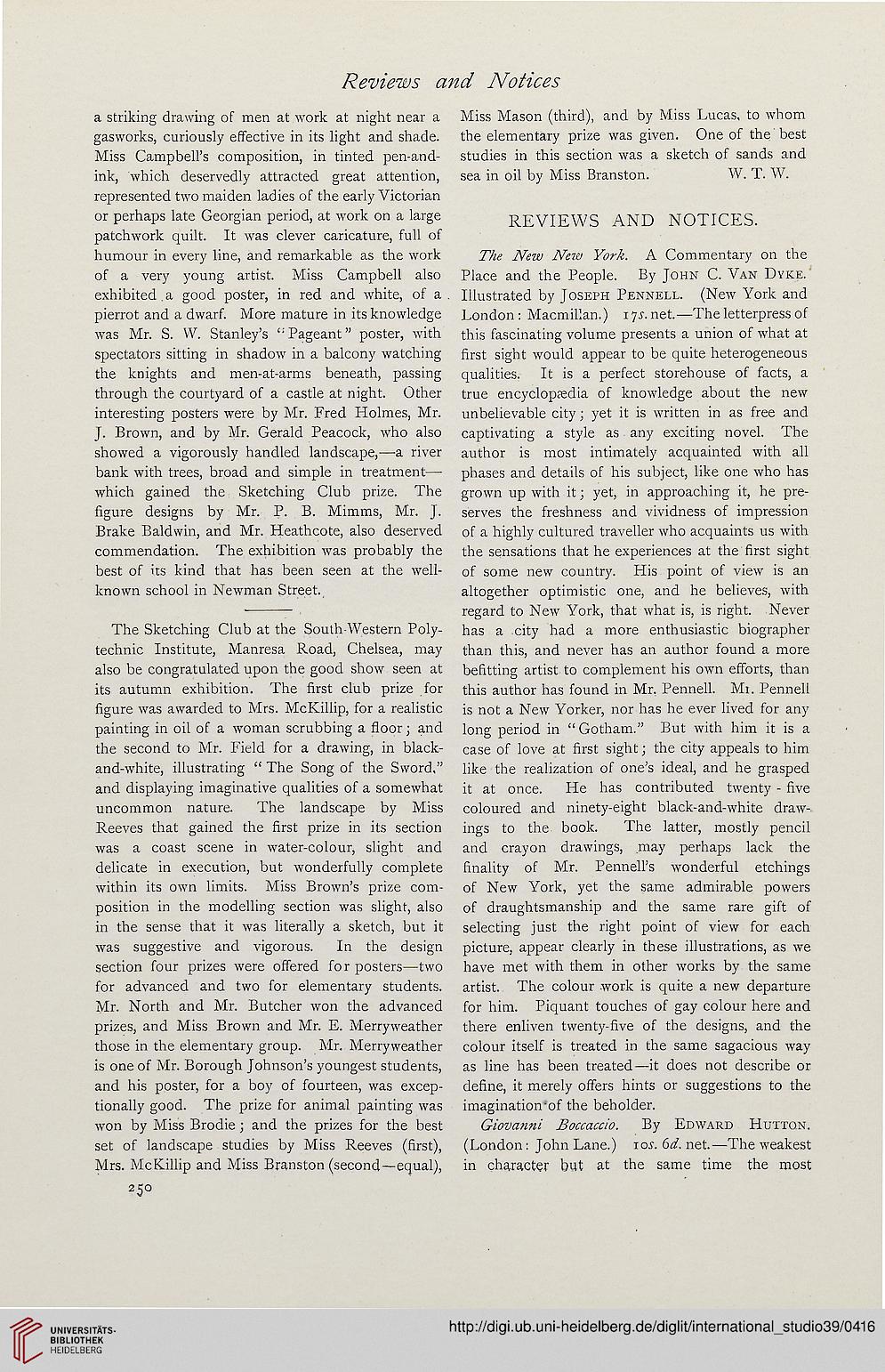 a striking drawing of men at work at night near a
gasworks, curiously effective in its light and shade.
Miss Campbell's composition, in tinted pen-and-
ink, which deservedly attracted great attention,
represented two maiden ladies of the early Victorian
or perhaps late Georgian period, at work on a large
patchwork quilt. It was clever caricature, full of
humour in every line, and remarkable as the work
of a very young artist. Miss Campbell also
exhibited a good poster, in red and white, of a
pierrot and a dwarf. More mature in its knowledge
was Mr. S. VV. Stanley's i: Pageant" poster, with
spectators sitting in shadow in a balcony watching
the knights and men-at-arms beneath, passing
through the courtyard of a castle at night. Other
interesting posters were by Mr. Fred Holmes, Mr.
J. Brown, and by Mr. Gerald Peacock, who also
showed a vigorously handled landscape,—a river
bank with trees, broad and simple in treatment—
which gained the Sketching Club prize. The
figure designs by Mr. P. B. Mimms, Mr. J.
Brake Baldwin, and Mr. Heathcote, also deserved
commendation. The exhibition was probably the
best of its kind that has been seen at the well-
known school in Newman Street.

The Sketching Club at the South-Western Poly-
technic Institute, Manresa Road, Chelsea, may
also be congratulated upon the good show seen at
its autumn exhibition. The first club prize for
figure was awarded to Mrs. McKillip, for a realistic
painting in oil of a woman scrubbing a floor; and
the second to Mr. Field for a drawing, in black-
and-white, illustrating " The Song of the Sword,"
and displaying imaginative qualities of a somewhat
uncommon nature. The landscape by Miss
Reeves that gained the first prize in its section
was a coast scene in water-colour, slight and
delicate in execution, but wonderfully complete
within its own limits. Miss Brown's prize com-
position in the modelling section was slight, also
in the sense that it was literally a sketch, but it
was suggestive and vigorous. In the design
section four prizes were offered for posters—two
for advanced and two for elementary students.
Mr. North and Mr. Butcher won the advanced
prizes, and Miss Brown and Mr. E. Merryweather
those in the elementary group. Mr. Merryweather
is one of Mr. Borough Johnson's youngest students,
and his poster, for a boy of fourteen, was excep-
tionally good. The prize for animal painting was
won by Miss Brodie ; and the prizes for the best
set of landscape studies by Miss Reeves (first),
Mrs. McKillip and Miss Branston (second—equal),
250

Miss Mason (third), and by Miss Lucas, to whom
the elementary prize was given. One of the best
studies in this section was a sketch of sands and
sea in oil by Miss Branston. W. T. W.

The New New York. A Commentary on the
Place and the People. By John C. Van Dyke.'
Illustrated by Joseph Pennell. (New York and
London: Macmillan.) 175.net.—The letterpress of
this fascinating volume presents a union of what at
first sight would appear to be quite heterogeneous
qualities. It is a perfect storehouse of facts, a
true encyclopaedia of knowledge about the new
unbelievable city; yet it is written in as free and
captivating a style as any exciting novel. The
author is most intimately acquainted with all
phases and details of his subject, like one who has
grown up with it; yet, in approaching it, he pre-
serves the freshness and vividness of impression
of a highly cultured traveller who acquaints us with
the sensations that he experiences at the first sight
of some new country. His point of view is an
altogether optimistic one, and he believes, with
regard to New York, that what is, is right. Never
has a city had a more enthusiastic biographer
than this, and never has an author found a more
befitting artist to complement his own efforts, than
this author has found in Mr. Pennell. Mt. Pennell
is not a New Yorker, nor has he ever lived for any
long period in "Gotham." But with him it is a
case of love at first sight; the city appeals to him
like the realization of one's ideal, and he grasped
it at once. He has contributed twenty - five
coloured and ninety-eight black-and-white draw-
ings to the book. The latter, mostly pencil
and crayon drawings, may perhaps lack the
finality of Mr. Pennell's wonderful etchings
of New York, yet the same admirable powers
of draughtsmanship and the same rare gift of
selecting just the right point of view for each
picture, appear clearly in these illustrations, as we
have met with them in other works by the same
artist. The colour work is quite a new departure
for him. Piquant touches of gay colour here and
there enliven twenty-five of the designs, and the
colour itself is treated in the same sagacious way
as line has been treated—it does not describe or
define, it merely offers hints or suggestions to the
imagination'of the beholder.

Giovanni Boccaccio. By Edward Huttqn.
(London: John Lane.) 10s. 6d. net.—The weakest
in character but at the same time the most