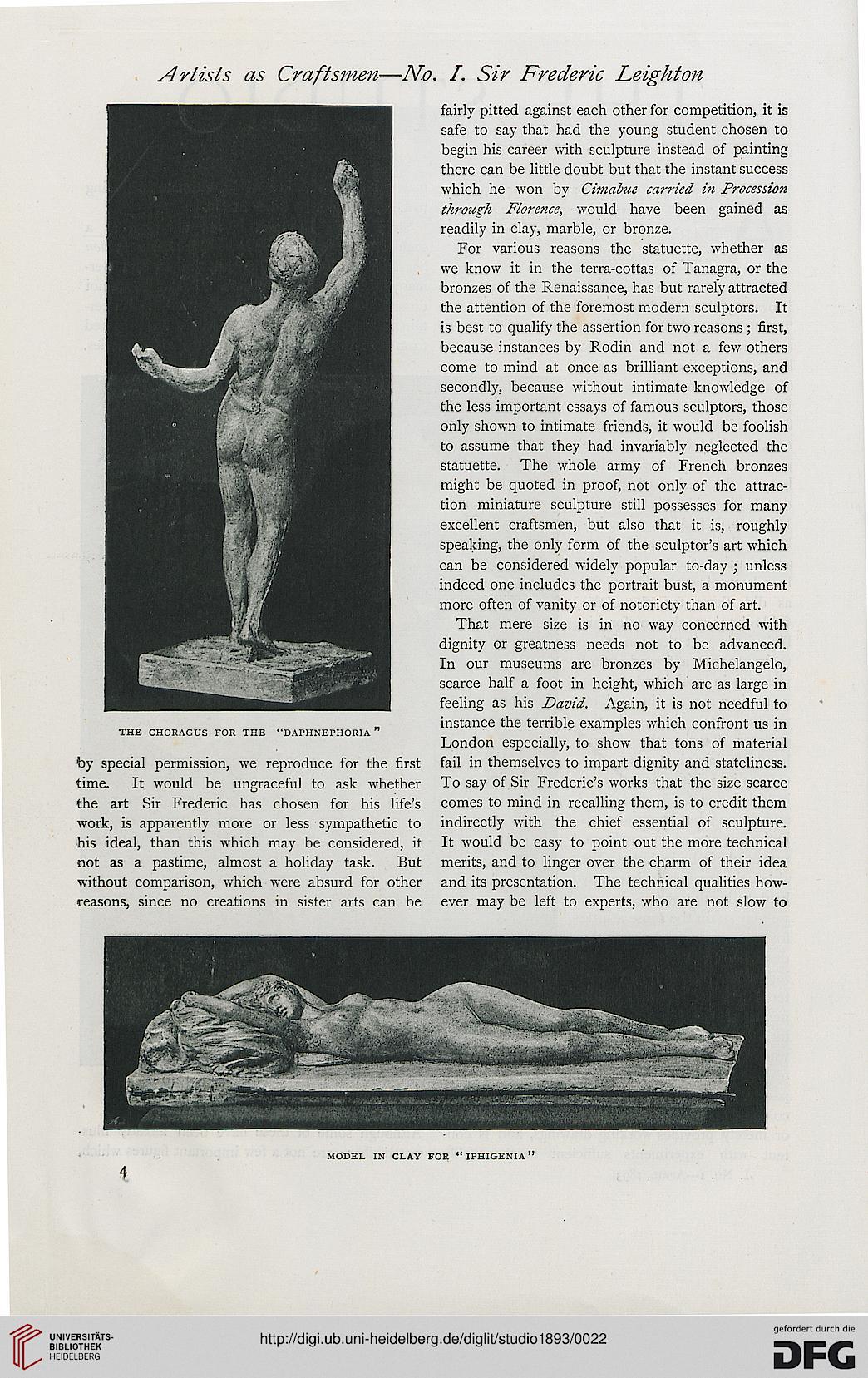 THE CHORAGUS FOR THE "DAPHNEPHORIA "

by special permission, we reproduce for the first
time. It would be ungraceful to ask whether
the art Sir Frederic has chosen for his life's
work, is apparently more or less sympathetic to
his ideal, than this which may be considered, it
not as a pastime, almost a holiday task. But
without comparison, which were absurd for other
reasons, since no creations in sister arts can be

fairly pitted against each other for competition, it is
safe to say that had the young student chosen to
begin his career with sculpture instead of painting
there can be little doubt but that the instant success
which he won by Cimabue carried in Procession
through Florence, would have been gained as
readily in clay, marble, or bronze.

For various reasons the statuette, whether as
we know it in the terra-cottas of Tanagra, or the
bronzes of the Renaissance, has but rarely attracted
the attention of the foremost modern sculptors. It
is best to qualify the assertion for two reasons ; first,
because instances by Rodin and not a few others
come to mind at once as brilliant exceptions, and
secondly, because without intimate knowledge of
the less important essays of famous sculptors, those
only shown to intimate friends, it would be foolish
to assume that they had invariably neglected the
statuette. The whole army of French bronzes
might be quoted in proof, not only of the attrac-
tion miniature sculpture still possesses for many
excellent craftsmen, but also that it is, roughly
speaking, the only form of the sculptor's art which
can be considered widely popular to-day ; unless
indeed one includes the portrait bust, a monument
more often of vanity or of notoriety than of art.

That mere size is in no way concerned with
dignity or greatness needs not to be advanced.
In our museums are bronzes by Michelangelo,
scarce half a foot in height, wThich are as large in
feeling as his David. Again, it is not needful to
instance the terrible examples which confront us in
London especially, to show that tons of material
fail in themselves to impart dignity and stateliness.
To say of Sir Frederic's works that the size scarce
comes to mind in recalling them, is to credit them
indirectly with the chief essential of sculpture.
It would be easy to point out the more technical
merits, and to linger over the charm of their idea
and its presentation. The technical qualities how-
ever may be left to experts, who are not slow to

MODEL IN CLAY FOR " IPHIGENIA "