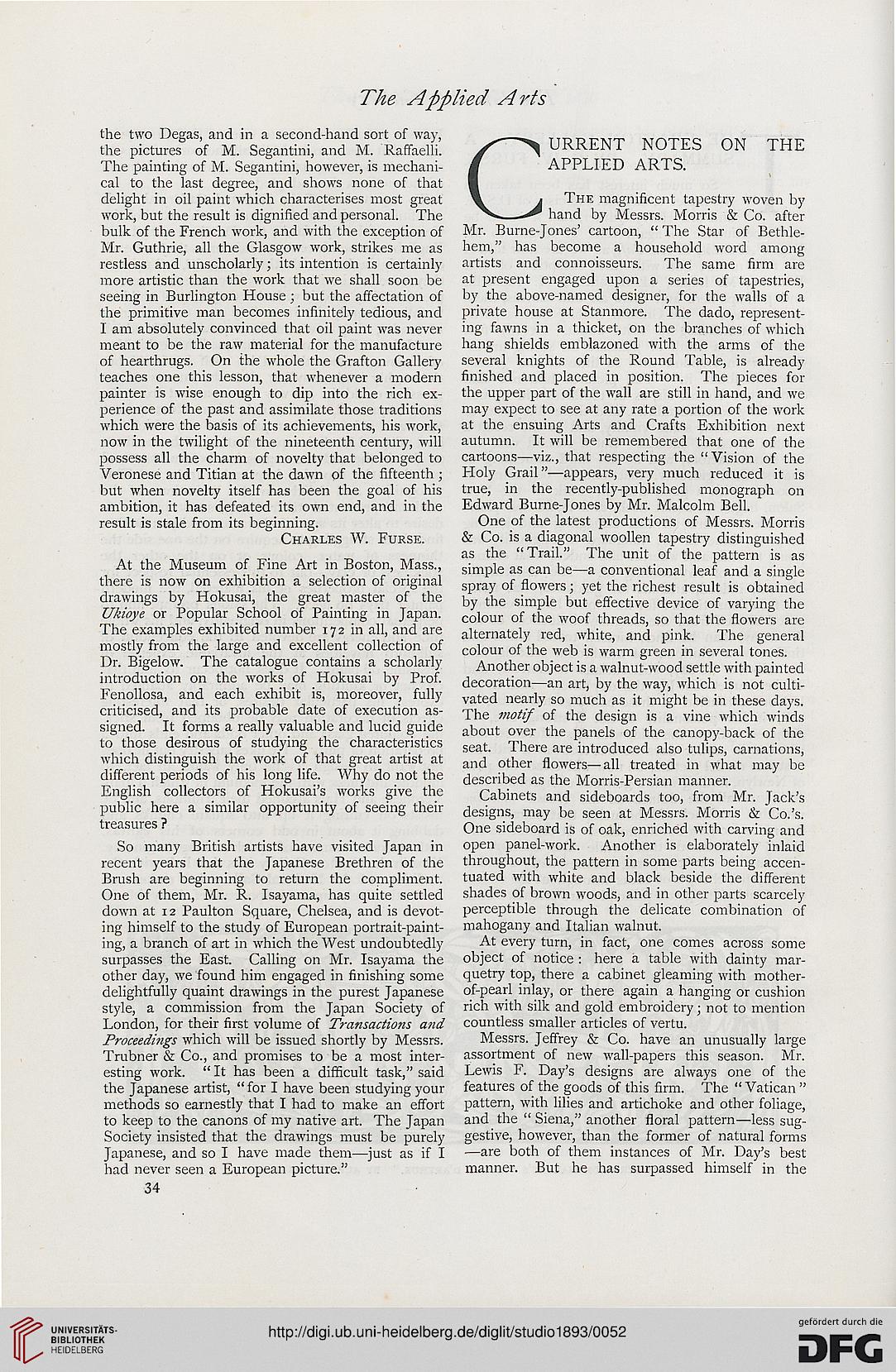 the two Degas, and in a second-hand sort of way,
the pictures of M. Segantini, and M. Raffaelli.
The painting of M. Segantini, however, is mechani-
cal to the last degree, and shows none of that
delight in oil paint which characterises most great
work, but the result is dignified and personal. The
bulk of the French work, and with the exception of
Mr. Guthrie, all the Glasgow work, strikes me as
restless and unscholarly; its intention is certainly
more artistic than the work that we shall soon be
seeing in Burlington House ; but the affectation of
the primitive man becomes infinitely tedious, and
I am absolutely convinced that oil paint was never
meant to be the raw material for the manufacture
of hearthrugs. On the whole the Grafton Gallery
teaches one this lesson, that whenever a modern
painter is wise enough to dip into the rich ex-
perience of the past and assimilate those traditions
which were the basis of its achievements, his work,
now in the twilight of the nineteenth century, will
possess all the charm of novelty that belonged to
Veronese and Titian at the dawn of the fifteenth ;
but when novelty itself has been the goal of his
ambition, it has defeated its own end, and in the
result is stale from its beginning.

At the Museum of Fine Art in Boston, Mass.,
there is now on exhibition a selection of original
drawings by Hokusai, the great master of the
Ukioye or Popular School of Painting in Japan.
The examples exhibited number 172 in all, and are
mostly from the large and excellent collection of
Dr. Bigelow. The catalogue contains a scholarly
introduction on the works of Hokusai by Prof.
Fenollosa, and each exhibit is, moreover, fully
criticised, and its probable date of execution as-
signed. It forms a really valuable and lucid guide
to those desirous of studying the characteristics
which distinguish the work of that great artist at
different periods of his long life. Why do not the
English collectors of Hokusai's works give the
public here a similar opportunity of seeing their
treasures ?

So many British artists have visited Japan in
recent years that the Japanese Brethren of the
Brush are beginning to return the compliment.
One of them, Mr. R. Isayama, has quite settled
down at 12 Paulton Square, Chelsea, and is devot-
ing himself to the study of European portrait-paint-
ing, a branch of art in which the West undoubtedly
surpasses the East. Calling on Mr. Isayama the
other day, we found him engaged in finishing some
delightfully quaint drawings in the purest Japanese
style, a commission from the Japan Society of
London, for their first volume of Transactions and
Proceedings which will be issued shortly by Messrs.
Trubner & Co., and promises to be a most inter-
esting work. " It has been a difficult task," said
the Japanese artist, "for I have been studying your
methods so earnestly that I had to make an effort
to keep to the canons of my native art. The Japan
Society insisted that the drawings must be purely
Japanese, and so I have made them—just as if I
had never seen a European picture."
34

URRENT NOTES ON THE
APPLIED ARTS.

The magnificent tapestry woven by
hand by Messrs. Morris & Co. after

Mr. Burne-Jones' cartoon, " The Star of Bethle-
hem," has become a household word among
artists and connoisseurs. The same firm are
at present engaged upon a series of tapestries,
by the above-named designer, for the walls of a
private house at Stanmore. The dado, represent-
ing fawns in a thicket, on the branches of which
hang shields emblazoned with the arms of the
several knights of the Round Table, is already
finished and placed in position. The pieces for
the upper part of the wall are still in hand, and we
may expect to see at any rate a portion of the work
at the ensuing Arts and Crafts Exhibition next
autumn. It will be remembered that one of the
cartoons—viz., that respecting the "Vision of the
Holy Grail"—appears, very much reduced it is
true, in the recently-published monograph on
Edward Burne-Jones by Mr. Malcolm Bell.

One of the latest productions of Messrs. Morris
& Co. is a diagonal woollen tapestry distinguished
as the "Trail." The unit of the pattern is as
simple as can be—a conventional leaf and a single
spray of flowers ; yet the richest result is obtained
by the simple but effective device of varying the
colour of the woof threads, so that the flowers arc
alternately red, white, and pink. The general
colour of the web is warm green in several tones.

Another object is a walnut-wood settle with painted
decoration—an art, by the way, which is not culti-
vated nearly so much as it might be in these days.
The motif of the design is a vine which winds
about over the panels of the canopy-back of the
seat. There are introduced also tulips, carnations,
and other flowers—all treated in what may be
described as the Morris-Persian manner.

Cabinets and sideboards too, from Mr. Jack's
designs, may be seen at Messrs. Morris & Co.'s.
One sideboard is of oak, enriched with carving and
open panel-work. Another is elaborately inlaid
throughout, the pattern in some parts being accen-
tuated with white and black beside the different
shades of brown woods, and in other parts scarcely
perceptible through the delicate combination of
mahogany and Italian walnut.

At every turn, in fact, one comes across some
object of notice : here a table with dainty mar-
quetry top, there a cabinet gleaming with mother-
of-pearl inlay, or there again a hanging or cushion
rich with silk and gold embroidery; not to mention
countless smaller articles of vertu.

Messrs. Jeffrey & Co. have an unusually large
assortment of new wall-papers this season. Mr.
Lewis F. Day's designs are always one of the
features of the goods of this firm. The "Vatican "
pattern, with lilies and artichoke and other foliage,
and the " Siena," another floral pattern—less sug-
gestive, however, than the former of natural forms
—are both of them instances of Mr. Day's best
manner. But he has surpassed himself in the