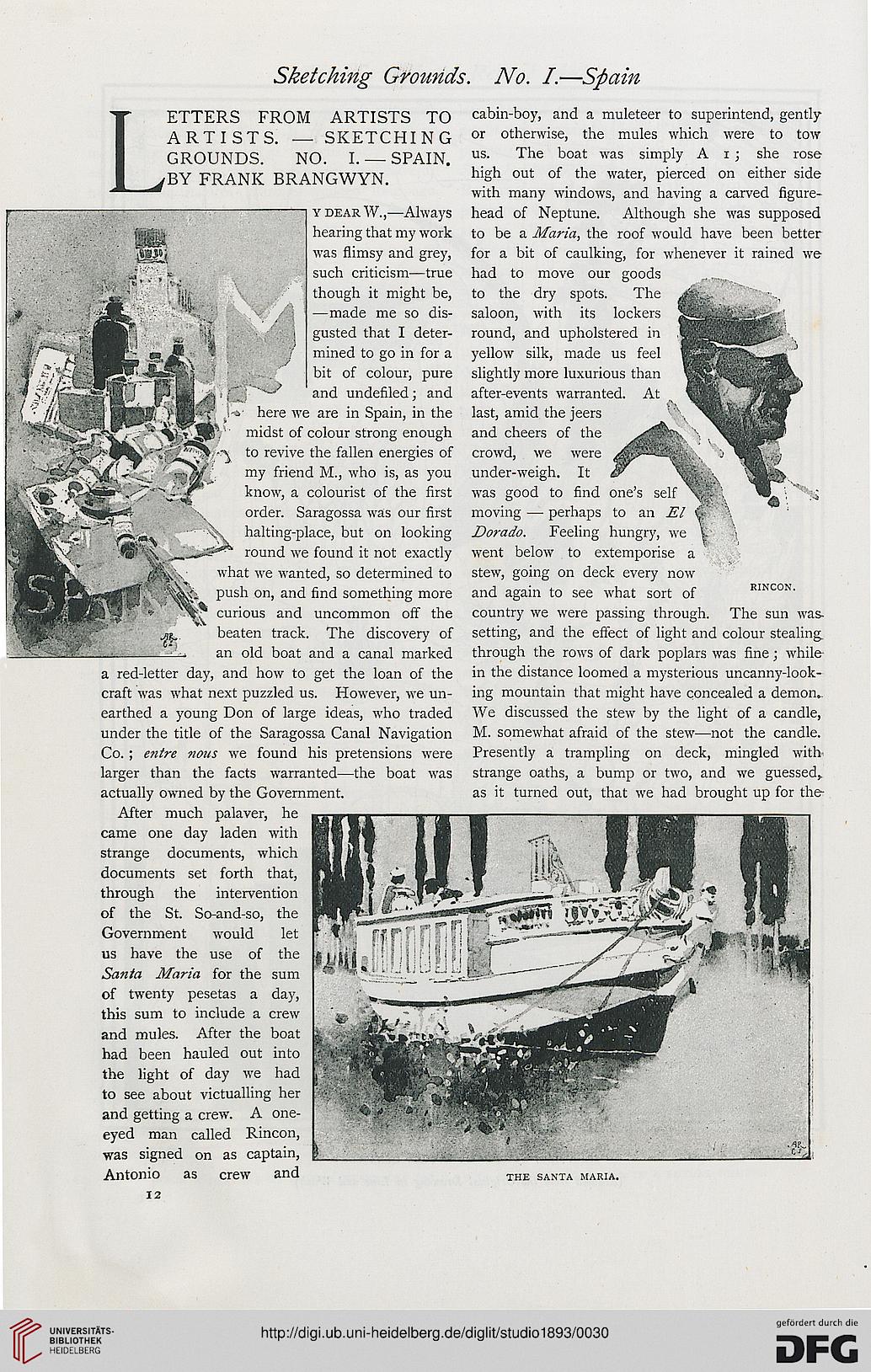 ETTERS FROM ARTISTS TO cabin-boy, and a muleteer to superintend, gently

ARTISTS. _ SKETCHING or otherwise, the mules which were to tow

BY FRANK BRANGWYN. high out of the water> pierced on either side

with many windows, and having a carved figure-
ydearW.,—Always head of Neptune. Although she was supposed
hearing that my work to be a Maria, the roof would have been better
was flimsy and grey, for a bit of caulking, for whenever it rained we
such criticism—true had to move our goods
though it might be, to the dry spots. The
—made me so dis- saloon, with its lockers
gusted that I deter- round, and upholstered in
mined to go in for a yellow silk, made us feel
bit of colour, pure slightly more luxurious than
and undefiled; and after-events warranted. At
here we are in Spain, in the last, amid the jeers
midst of colour strong enough and cheers of the
to revive the fallen energies of crowd, we were
my friend M., who is, as you under-weigh. It
know, a colourist of the first was good to find one's self
order. Saragossa was our first moving — perhaps to an El
halting-place, but on looking Dorado. Feeling hungry, we
round we found it not exactly went below to extemporise a
what we wanted, so determined to stew, going on deck every now
push on, and find something more and again to see what sort of
curious and uncommon off the country we were passing through. The sun was-
beaten track. The discovery of setting, and the effect of light and colour stealing
an old boat and a canal marked through the rows of dark poplars was fine; while
a red-letter day, and how to get the loan of the in the distance loomed a mysterious uncanny-look-
craft was what next puzzled us. However, we un- ing mountain that might have concealed a demon-
earthed a young Don of large ideas, who traded We discussed the stew by the light of a candle,
under the title of the Saragossa Canal Navigation M. somewhat afraid of the stew—not the candle.
Co. ; entre nous we found his pretensions were Presently a trampling on deck, mingled with'
larger than the facts warranted—the boat was strange oaths, a bump or two, and we guessed,,
actually owned by the Government. as it turned out, that we had brought up for the-

After much palaver, he
came one day laden with
strange documents, which
documents set forth that,
through the intervention
of the St. So-and-so, the
Government would let
us have the use of the
Santa Maria for the sum
of twenty pesetas a day,
this sum to include a crew
and mules. After the boat
had been hauled out into
the light of day we had
to see about victualling her
and getting a crew. A one-
eyed man called Rincon,
was signed on as captain,

Antonio as crew and the santa maria.