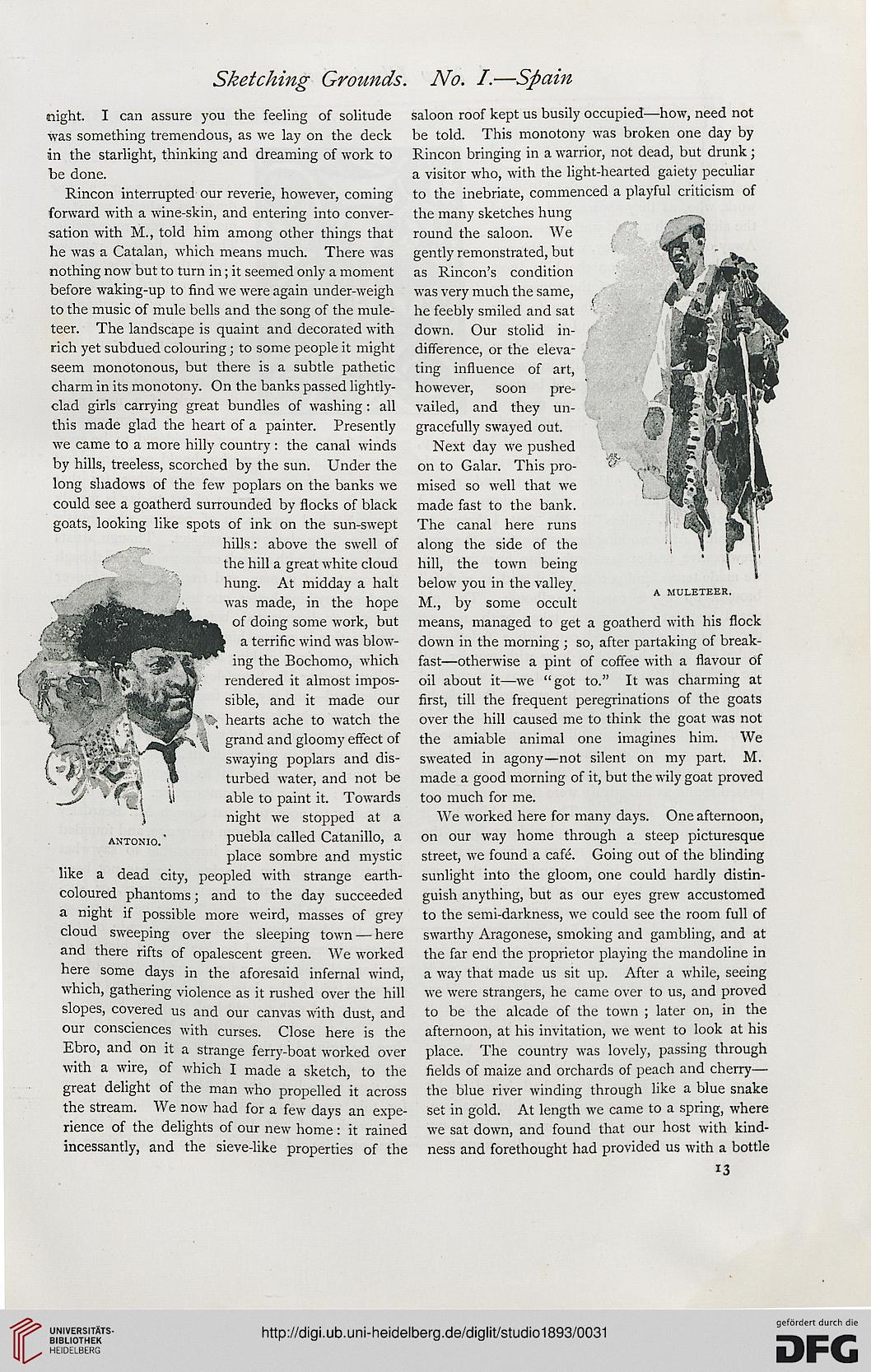 night. I can assure you the feeling of solitude saloon roof kept us busily occupied—how, need not
was something tremendous, as we lay on the deck be told. This monotony was broken one day by
in the starlight, thinking and dreaming of work to Rincon bringing in a warrior, not dead, but drunk;
be done. a visitor who, with the light-hearted gaiety peculiar
Rincon interrupted our reverie, however, coming to the inebriate, commenced a playful criticism of
forward with a wine-skin, and entering into conver- the many sketches hung
sation with M., told him among other things that round the saloon. We
he was a Catalan, which means much. There was gently remonstrated, but
nothing now but to turn in; it seemed only a moment as Rincon's condition
before waking-up to find we were again under-weigh was very much the same,
to the music of mule bells and the song of the mule- he feebly smiled and sat
teer. The landscape is quaint and decorated with down. Our stolid in-
rich yet subdued colouring; to some people it might difference, or the eleva-
seem monotonous, but there is a subtle pathetic ting influence of art,
charm in its monotony. On the banks passed lightly- however, soon pre-
clad girls carrying great bundles of washing: all vailed, and they un-
this made glad the heart of a painter. Presently gracefully swayed out.
we came to a more hilly country: the canal winds Next day we pushed
by hills, treeless, scorched by the sun. Under the on to Galar. This pro-
long shadows of the few poplars on the banks we mised so well that we
could see a goatherd surrounded by flocks of black made fast to the bank,
goats, looking like spots of ink on the sun-swept The canal here runs
hills: above the swell of along the side of the
' the hill a great white cloud hill, the town being
BB hung. At midday a halt below you in the valley.

was made, in the hope M., by some occult
of doing some work, but means, managed to get a goatherd with his flock
a terrific wind was blow- down in the morning ; so, after partaking of break-
ing the Bochomo, which fast—otherwise a pint of coffee with a flavour of
rendered it almost impos- oil about it—we " got to." It was charming at
sible, and it made our first, till the frequent peregrinations of the goats
hearts ache to watch the over the hill caused me to think the goat was not
grand and gloomy effect of the amiable animal one imagines him. We
swaying poplars and dis- sweated in agony—not silent on my part. M.
turbed water, and not be made a good morning of it, but the wily goat proved
able to paint it. Towards too much for me.

night we stopped at a We worked here for many days. One afternoon,

antonio. ' puebla called Catanillo, a on our way home through a steep picturesque

place sombre and mystic street, we found a cafe\ Going out of the blinding

like a dead city, peopled with strange earth- sunlight into the gloom, one could hardly distin-

coloured phantoms; and to the day succeeded guish anything, but as our eyes grew accustomed

a night if possible more weird, masses of grey to the semi-darkness, we could see the room full of
cloud sweeping over the sleeping town — here swarthy Aragonese, smoking and gambling, and at
and there rifts of opalescent green. We worked the far end the proprietor playing the mandoline in
here some days in the aforesaid infernal wind, a way that made us sit up. After a while, seeing
which, gathering violence as it rushed over the hill we were strangers, he came over to us, and proved
slopes, covered us and our canvas with dust, and to be the alcade of the town ; later on, in the
our consciences with curses. Close here is the afternoon, at his invitation, we went to look at his
Ebro, and on it a strange ferry-boat worked over place. The country was lovely, passing through
with a wire, of which I made a sketch, to the fields of maize and orchards of peach and cherry—
great delight of the man who propelled it across the blue river winding through like a blue snake
the stream. We now had for a few days an expe- set in gold. At length we came to a spring, where
rience of the delights of our new home: it rained we sat down, and found that our host with kind-
incessantly, and the sieve-like properties of the ness and forethought had provided us with a bottle