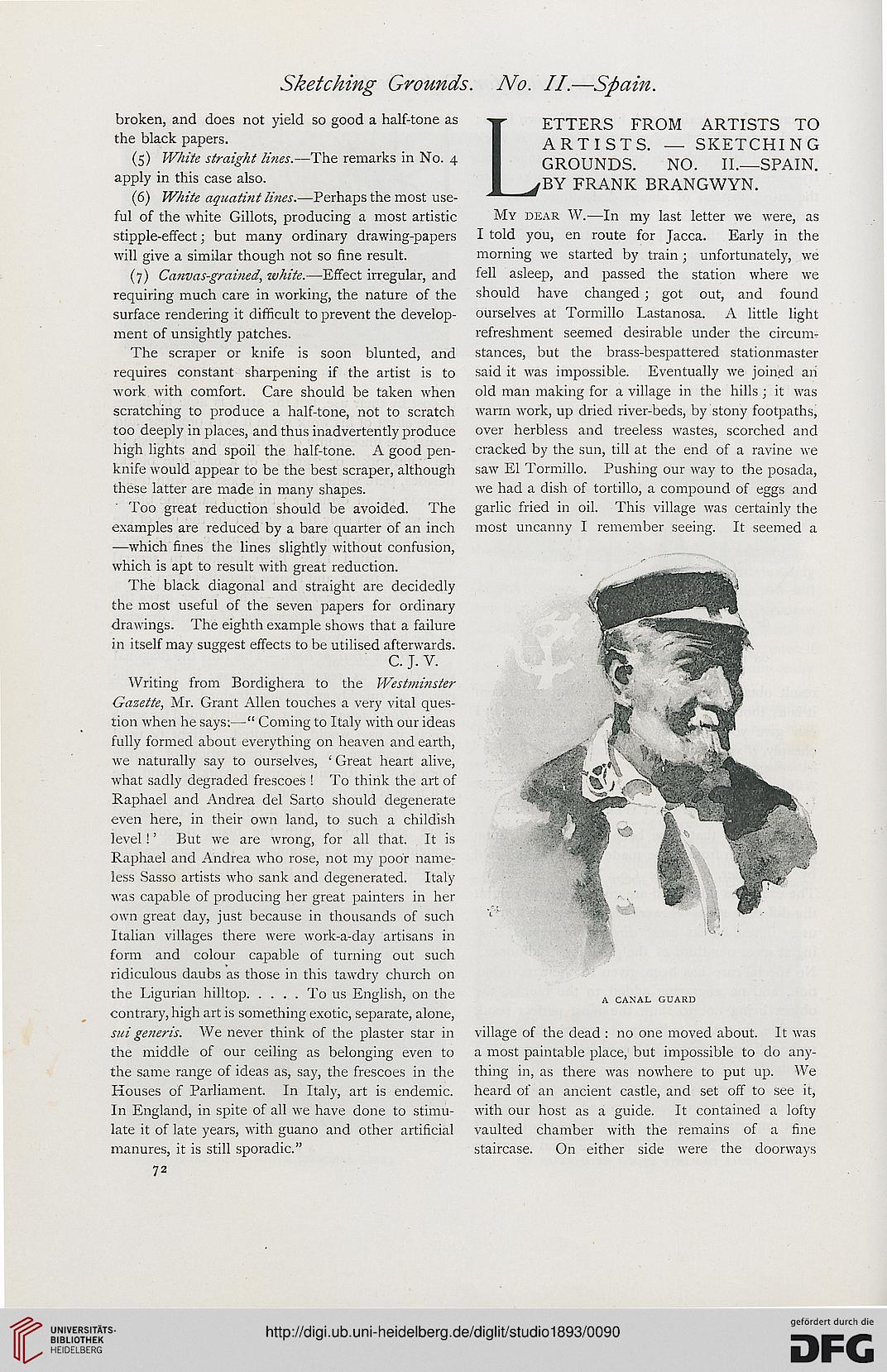 broken, and does not yield so good a half-tone as ETTERS FROM ARTISTS TO

(6) White aquatint lines.—Perhaps the most use- -

ful of the white Gillots, producing a most artistic My dear W.—In my last letter we were, as
stipple-effect; but many ordinary drawing-papers I told you, en route for Jacca. Early in the
will give a similar though not so fine result. morning we started by train ; unfortunately, we

(7) Canvas-grained, white.—Effect irregular, and fell asleep, and passed the station where we
requiring much care in working, the nature of the should have changed ; got out, and found
surface rendering it difficult to prevent the develop- ourselves at Tormillo Lastanosa. A little light
ment of unsightly patches. refreshment seemed desirable under the circum-

The scraper or knife is soon blunted, and stances, but the brass-bespattered stationmaster
requires constant sharpening if the artist is to said it was impossible. Eventually we joined ah
work with comfort. Care should be taken when old man making for a village in the hills ; it was
scratching to produce a half-tone, not to scratch warm work, up dried river-beds, by stony footpaths,
too deeply in places, and thus inadvertently produce over herbless and treeless wastes, scorched and
high lights and spoil the half-tone. A good pen- cracked by the sun, till at the end of a ravine we
knife would appear to be the best scraper, although saw El Tormillo. Pushing our way to the posada,
these latter are made in many shapes. we had a dish of tortillo, a compound of eggs and

Too great reduction should be avoided. The garlic fried in oil. This village was certainly the
examples are reduced by a bare quarter of an inch most uncanny I remember seeing. It seemed a
—which fines the lines slightly without confusion,
which is apt to result with great reduction.

The black diagonal and straight are decidedly
the most useful of the seven papers for ordinary
drawings. The eighth example shows that a failure
in itself may suggest effects to be utilised afterwards.

Writing from Bordighera to the Westminster
Gazette, Mr. Grant Allen touches a very vital ques-
tion when he says;—" Coming to Italy with our ideas
fully formed about everything on heaven and earth,
we naturally say to ourselves, ' Great heart alive,
what sadly degraded frescoes ! To think the art of
Raphael and Andrea del Sarto should degenerate
even here, in their own land, to such a childish
level!' But we are wrong, for all that. It is
Raphael and Andrea who rose, not my poor name-
less Sasso artists who sank and degenerated. Italy
was capable of producing her great painters in her
own great day, just because in thousands of such
Italian villages there were work-a-day artisans in
form and colour capable of turning out such
ridiculous daubs as those in this tawdry church on

the Ligurian hilltop.....To us English, on the

sui generis. We never think of the plaster star in village of the dead : no one moved about. It was
the middle of our ceiling as belonging even to a most paintable place, but impossible to do any-
the same range of ideas as, say, the frescoes in the thing in, as there was nowhere to put up. We
Houses of Parliament. In Italy, art is endemic. heard of an ancient castle, and set off to see it,
In England, in spite of all we have done to stirnu- with our host as a guide. It contained a lofty
late it of late years, with guano and other artificial vaulted chamber with the remains of a fine
manures, it is still sporadic." staircase. On either side were the doorways