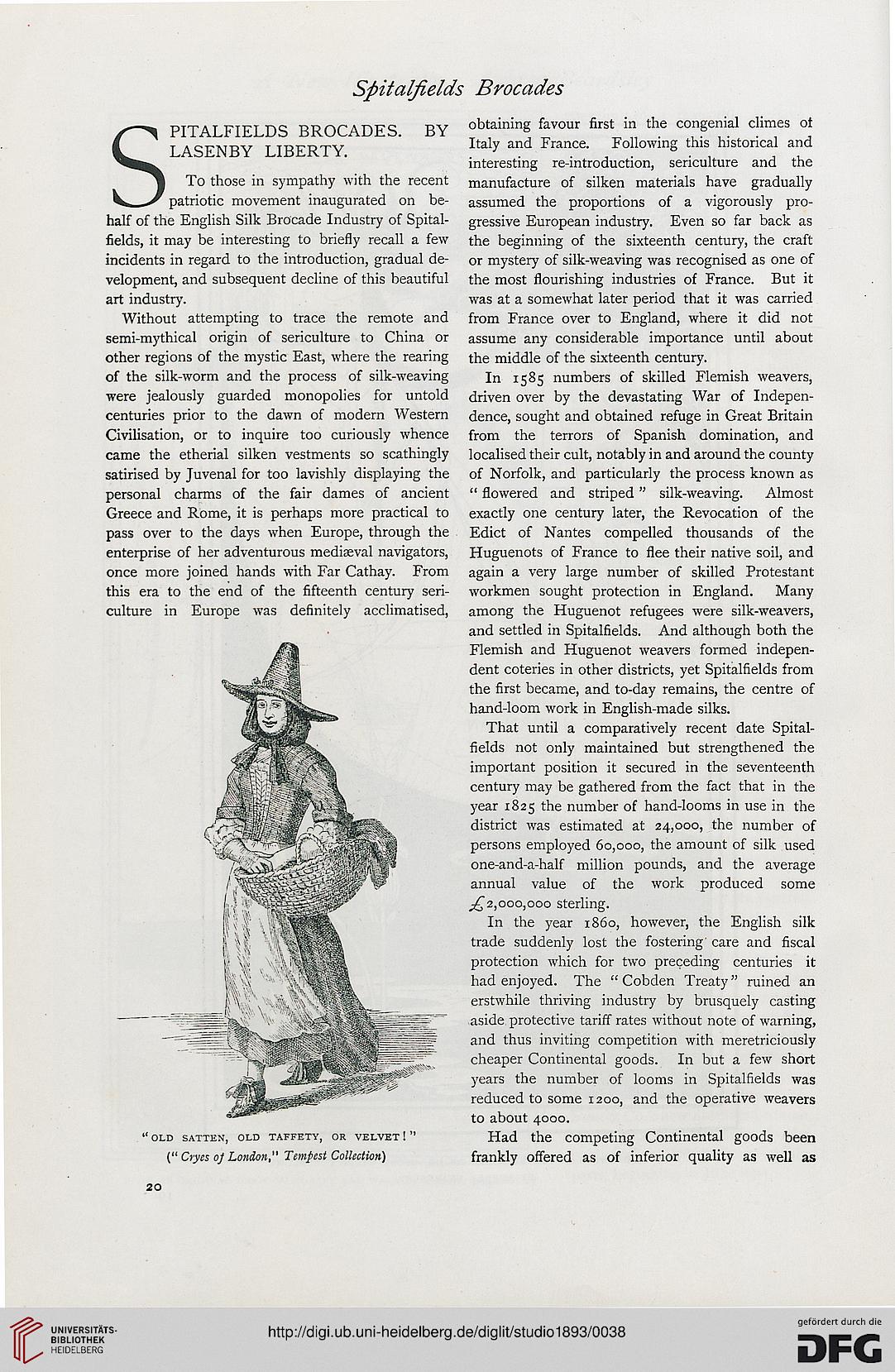 half of the English Silk Brocade Industry of Spital-
fields, it may be interesting to briefly recall a few
incidents in regard to the introduction, gradual de-
velopment, and subsequent decline of this beautiful
art industry.

Without attempting to trace the remote and
semi-mythical origin of sericulture to China or
other regions of the mystic East, where the rearing
of the silk-worm and the process of silk-weaving
were jealously guarded monopolies for untold
centuries prior to the dawn of modern Western
Civilisation, or to inquire too curiously whence
came the etherial silken vestments so scathingly
satirised by Juvenal for too lavishly displaying the
personal charms of the fair dames of ancient
Greece and Rome, it is perhaps more practical to
pass over to the days when Europe, through the
enterprise of her adventurous mediaeval navigators,
once more joined hands with Far Cathay. From
this era to the end of the fifteenth century seri-
culture in Europe was definitely acclimatised,

obtaining favour first in the congenial climes ot
Italy and France. Following this historical and
interesting re-introduction, sericulture and the
manufacture of silken materials have gradually
assumed the proportions of a vigorously pro-
gressive European industry. Even so far back as
the beginning of the sixteenth century, the craft
or mystery of silk-weaving was recognised as one of
the most flourishing industries of France. But it
was at a somewhat later period that it was carried
from France over to England, where it did not
assume any considerable importance until about
the middle of the sixteenth century.

In 1585 numbers of skilled Flemish weavers,
driven over by the devastating War of Indepen-
dence, sought and obtained refuge in Great Britain
from the terrors of Spanish domination, and
localised their cult, notably in and around the county
of Norfolk, and particularly the process known as
" flowered and striped " silk-weaving. Almost
exactly one century later, the Revocation of the
Edict of Nantes compelled thousands of the
Huguenots of France to flee their native soil, and
again a very large number of skilled Protestant
workmen sought protection in England. Many
among the Huguenot refugees were silk-weavers,
and settled in Spitalfields. And although both the
Flemish and Huguenot weavers formed indepen-
dent coteries in other districts, yet Spitalfields from
the first became, and to-day remains, the centre of
hand-loom work in English-made silks.

That until a comparatively recent date Spital-
fields not only maintained but strengthened the
important position it secured in the seventeenth
century may be gathered from the fact that in the
year 1825 the number of hand-looms in use in the
district was estimated at 24,000, the number of
persons employed 60,000, the amount of silk used
one-and-a-half million pounds, and the average
annual value of the work produced some
^2,000,000 sterling.

In the year i860, however, the English silk
trade suddenly lost the fostering care and fiscal
protection which for two preceding centuries it
had enjoyed. The " Cobden Treaty" ruined an
erstwhile thriving industry by brusquely casting
aside protective tariff rates without note of warning,
and thus inviting competition with meretriciously
cheaper Continental goods. In but a few short
years the number of looms in Spitalfields was
reduced to some 1200, and the operative weavers
to about 4000.