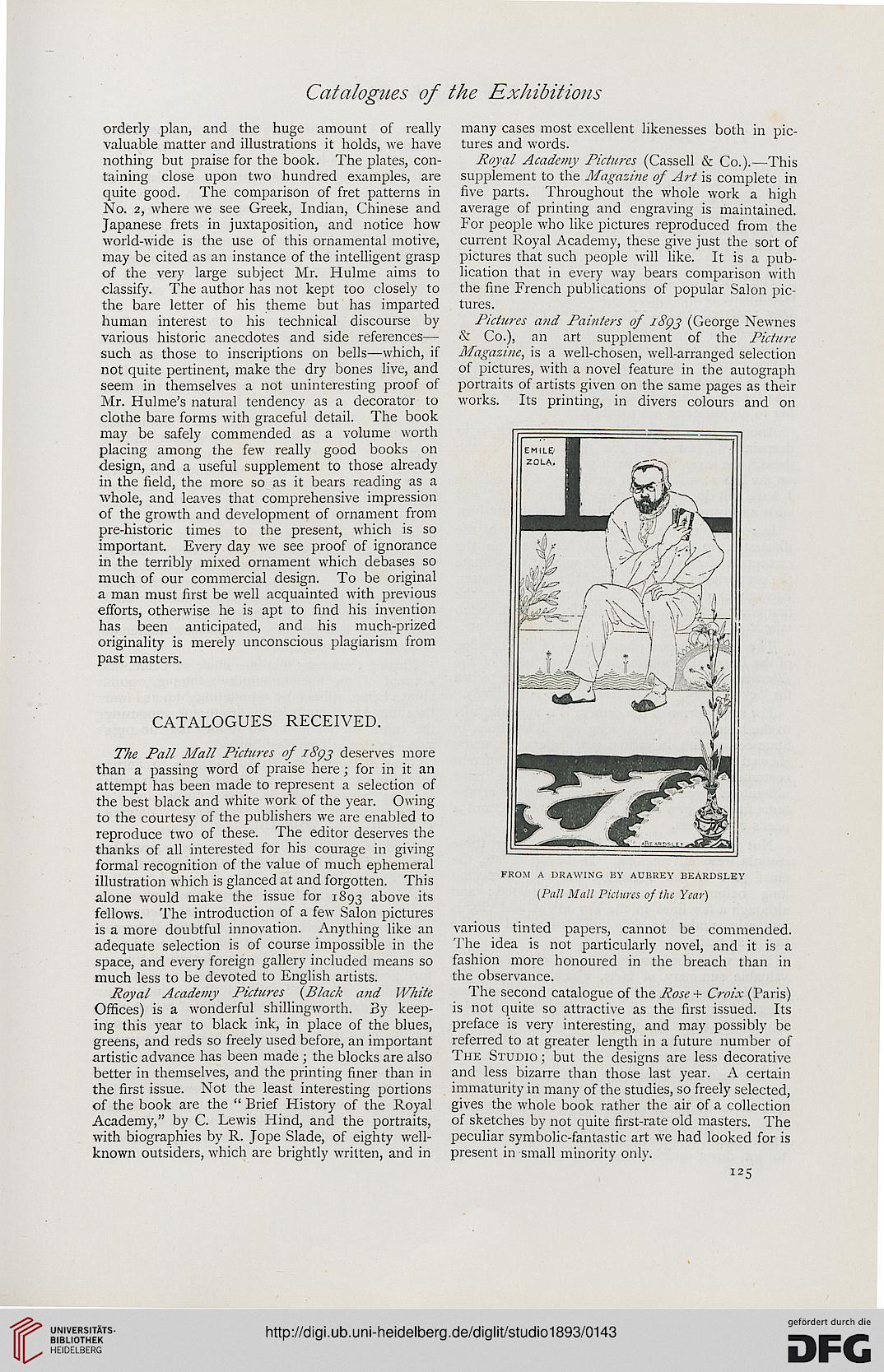 orderly plan, and the huge amount of really
valuable matter and illustrations it holds, we have
nothing but praise for the book. The plates, con-
taining close upon two hundred examples, are
quite good. The comparison of fret patterns in
No. 2, where we see Greek, Indian, Chinese and
Japanese frets in juxtaposition, and notice how
world-wide is the use of this ornamental motive,
may be cited as an instance of the intelligent grasp
of the very large subject Mr. Hulme aims to
classify. The author has not kept too closely to
the bare letter of his theme but has imparted
human interest to his technical discourse by
various historic anecdotes and side references—
such as those to inscriptions on bells—which, if
not quite pertinent, make the dry bones live, and
seem in themselves a not uninteresting proof of
Mr. Hulme's natural tendency as a decorator to
clothe bare forms with graceful detail. The book
may be safely commended as a volume worth
placing among the few really good books on
design, and a useful supplement to those already
in the field, the more so as it bears reading as a
whole, and leaves that comprehensive impression
of the growth and development of ornament from
pre-historic times to the present, which is so
important. Every day we see proof of ignorance
in the terribly mixed ornament which debases so
much of our commercial design. To be original
a man must first be well acquainted with previous
efforts, otherwise he is apt to find his invention
has been anticipated, and his much-prized
originality is merely unconscious plagiarism from
past masters.

The Pall Mall Pictures of 1893 deserves more
than a passing word of praise here; for in it an
attempt has been made to represent a selection of
the best black and white work of the year. Owing
to the courtesy of the publishers we are enabled to
reproduce two of these. The editor deserves the
thanks of all interested for his courage in giving
formal recognition of the value of much ephemeral
illustration which is glanced at and forgotten. This
alone would make the issue for 1893 above its
fellows. The introduction of a few Salon pictures
is a more doubtful innovation. Anything like an
adequate selection is of course impossible in the
space, and every foreign gallery included means so
much less to be devoted to English artists.

Royal Academy Pictures {Black and White
Offices) is a wonderful shillingworth. By keep-
ing this year to black ink, in place of the blues,
greens, and reds so freely used before, an important
artistic advance has been made ; the blocks are also
better in themselves, and the printing finer than in
the first issue. Not the least interesting portions
of the book are the " Brief History of the Royal
Academy," by C. Lewis Hind, and the portraits,
with biographies by R. Jope Slade, of eighty well-
known outsiders, which are brightly written, and in

many cases most excellent likenesses both in pic-
tures and words.

Royal Academy Pictures (Cassell & Co.).—This
supplement to the Magazine of Art is complete in
five parts. Throughout the whole work a high
average of printing and engraving is maintained.
For people who like pictures reproduced from the
current Royal Academy, these give just the sort of
pictures that such people will like. It is a pub-
lication that in every way bears comparison with
the fine French publications of popular Salon pic-
tures.

Pictures and Painters of 1893 (George Newnes
«!* Co.), an art supplement of the Picture
Magazine, is a well-chosen, well-arranged selection
of pictures, with a novel feature in the autograph
portraits of artists given on the same pages as their
works. Its printing, in divers colours and on

FROM A DRAWING BY AUBREY BEARDSLEY

(Pall Mall Pictures of the Year)

various tinted papers, cannot be commended.
The idea is not particularly novel, and it is a
fashion more honoured in the breach than in
the observance.

The second catalogue of the Rose + Croix (Paris)
is not quite so attractive as the first issued. Its
preface is very interesting, and may possibly be
referred to at greater length in a future number of
The Studio; but the designs are less decorative
and less bizarre than those last year. A certain
immaturity in many of the studies, so freely selected,
gives the whole book rather the air of a collection
of sketches by not quite first-rate old masters. The
peculiar symbolic-fantastic art we had looked for is
present in small minority only.