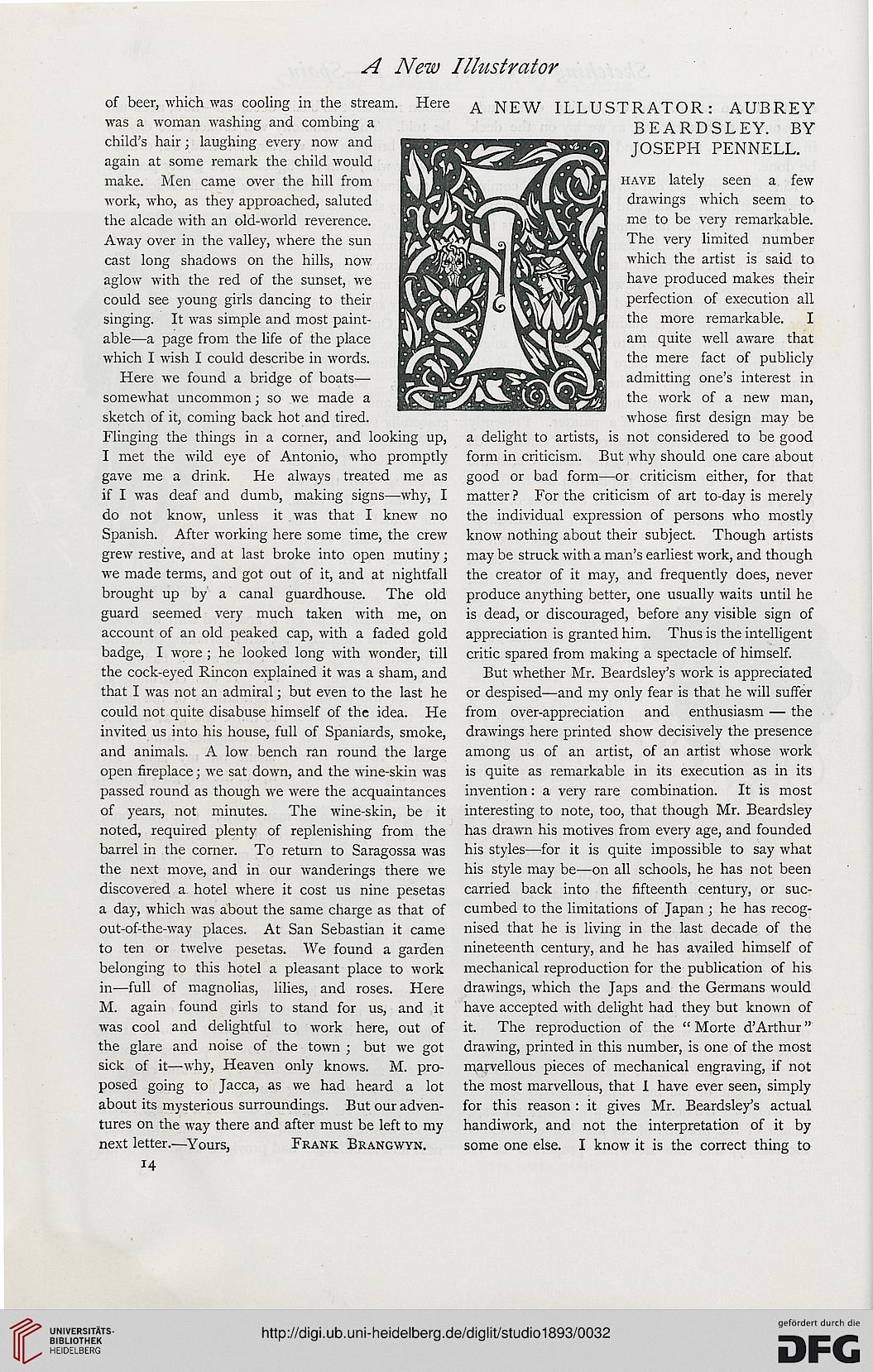 of beer, which was cooling in the stream. Here ^ NEW ILLUSTRATOR: AUBREY
was a woman washing and combing a BEARDSLEY BY

work, who, as the\-approached, saluted MfafjlXB^^al^OgM drawings which seem to
the alcacle with an old-world reverence. ftqw*^r^T MjM^SaffJ me t0 1)0 Vely remarkable.
Away over in the valley, where the sun J^WigwlS a R^Q^Rf Jj The very limited number
cast long shadows on the hills, now rjglyMWw/f DHM&\Yafl which the artist is said to
aglow with the red of the sunset, we ^^w^^2l NKSfcySKwIf have l)rocluced makes their
could see young girls dancing to their tJyjsYjCT Gt I WVVNrTB M perfection of execution all
singing. It was simple and most paint- KWmHKu V1 T^HLfl the more remarkable. I
able—a page front the life of the place flwCS^jf Y^3r*\V<J am Qu'tc well aware that
which I wish I could describe in words. KdlCAlVy V^ftt^^I t'lc mere fact of publicly

Here we- found a bridge of boats— ftfi5^MP^PjK353w^S m admitting one's interest in
somewhat uncommon; so we made a Kf j^Wirl iV"^8>afflLlTr^^i wor^ °^ a new manj

sketch of it, coming back hot and tired. whose first design may be

Flinging the things in a corner, and looking up, a delight to artists, is not considered to be good
I met the wild eye of Antonio, who promptly form in criticism. But why should one care about
gave me a drink. He always treated me as good or bad form—or criticism either, for that
if I was deaf and dumb, making signs—why, I matter ? For the criticism of art to-day is merely
do not know, unless it was that I knew no the individual expression of persons who mostly
Spanish. After working here some time, the crew know nothing about their subject. Though artists
grew restive, and at last broke into open mutiny; may be struck with a man's earliest work, and though
we made terms, and got out of it, and at nightfall the creator of it may, and frequently does, never
brought up by a canal guardhouse. The old produce anything better, one usually waits until he
guard seemed very much taken with me, on is dead, or discouraged, before any visible sign of
account of an old peaked cap, with a faded gold appreciation is granted him. Thus is the intelligent
badge, I wore ; he looked long with wonder, till critic spared from making a spectacle of himself,
the cock-eyed Rincon explained it was a sham, and But whether Mr. Beardsley's work is appreciated
that I was not an admiral; but even to the last he or despised—and my only fear is that he will suffer
could not quite disabuse himself of the idea. He from over-appreciation and enthusiasm — the
invited us into his house, full of Spaniards, smoke, drawings here printed show decisively the presence
and animals. A low bench ran round the large among us of an artist, of an artist whose work
open fireplace; we sat down, and the wine-skin was is quite as remarkable in its execution as in its
passed round as though we were the acquaintances invention : a very rare combination. It is most
of years, not minutes. The wine-skin, be it interesting to note, too, that though Mr. Beardsley
noted, required plenty of replenishing from the has drawn his motives from every age, and founded
barrel in the corner. To return to Saragossa was his styles—for it is quite impossible to say what
the next move, and in our wanderings there we his style may be—on all schools, he has not been
discovered a. hotel where it cost us nine pesetas carried back into the fifteenth century, or suc-
a day, which was about the same charge as that of cumbed to the limitations of Japan ; he has recog-
out-of-the-way places. At San Sebastian it came nised that he is living in the last decade of the
to ten or twelve pesetas. We found a garden nineteenth century, and he has availed himself of
belonging to this hotel a pleasant place to work mechanical reproduction for the publication of his
in—full of magnolias, lilies, and roses. Here drawings, which the Japs and the Germans would
M. again found girls to stand for us, and it have accepted with delight had they but known of
was cool and delightful to work here, out of it. The reproduction of the " Morte d'Arthur"
the glare and noise of the town ; but we got drawing, printed in this number, is one of the most
sick of it—why, Heaven only knows. M. pro- marvellous pieces of mechanical engraving, if not
posed going to Jacca, as we had heard a lot the most marvellous, that I have ever seen, simply
about its mysterious surroundings. But our adven- for this reason : it gives Mr. Beardsley's actual
tures on the way there and after must be left to my handiwork, and not the interpretation of it by
next letter.—Yours, Frank Brangwyn. some one else. I know it is the correct thing to