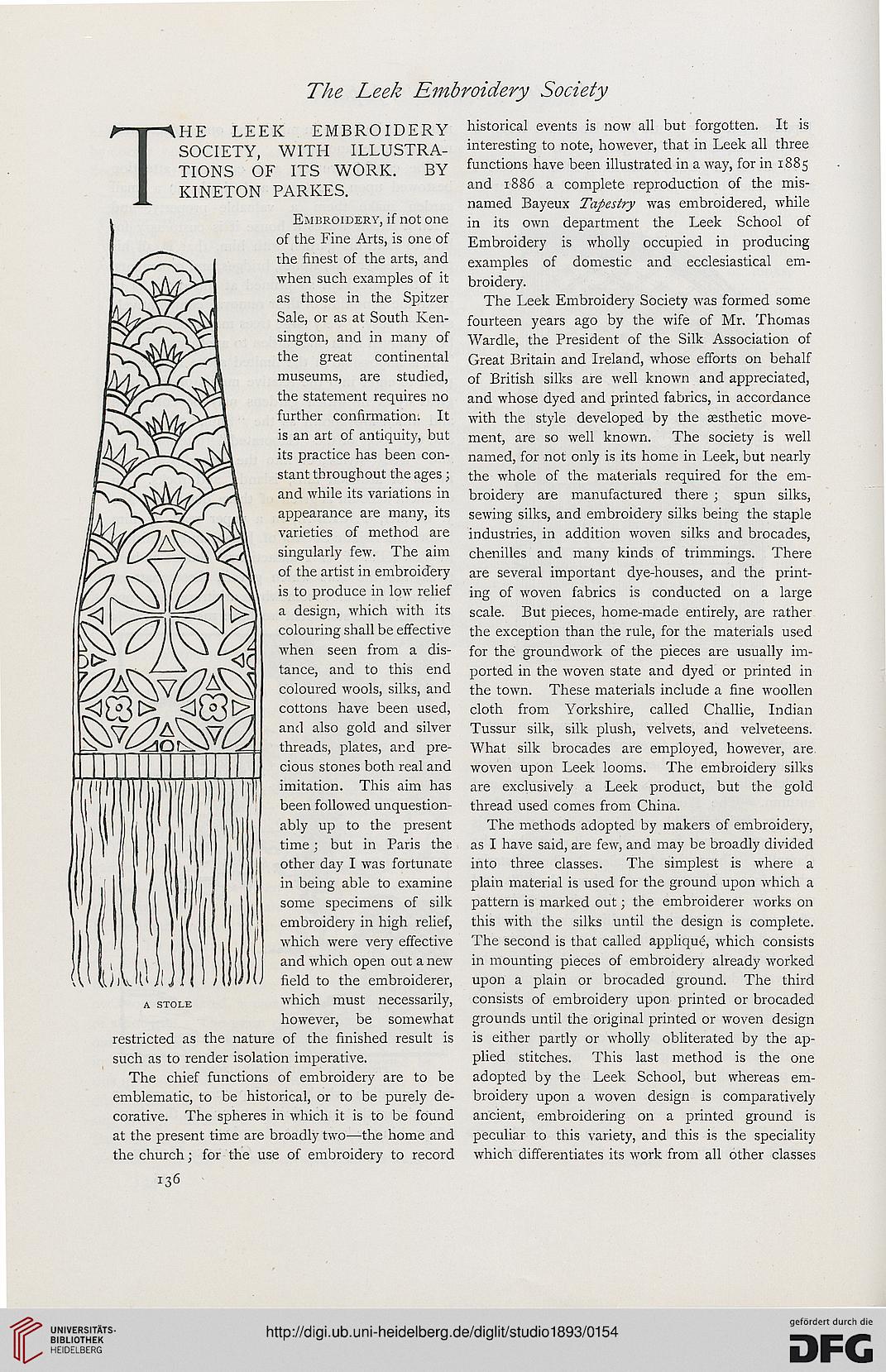 HE LEEK EMBROIDERY historical events is now all but forgotten. It is

SOCIETY WITH ILLUSTRA.- interesting to note, however, that in Leek all three

TIONS OF ITS WORK BY functions have been illustrated in a way, for in 1885

KINETON PARKES an<^ a complete reproduction of the mis-

named Bayeux Tapestry was embroidered, while

Embroidery, if not one jn jts own department the Leek School of

of the Fine Arts, is one of Embroidery is wholly occupied in producing

the finest of the arts, and examples of domestic and ecclesiastical em-

when such examples of it broidery.

as those in the Spitzer The Leek Embroidery Society was formed some
Sale, or as at South Ken- fourteen years ago by the wife of Mr. Thomas
sington, and in many of Wardle, the President of the Silk Association of
the great continental Great Britain and Ireland, whose efforts on behalf
museums, are studied, 0f British silks are well known and appreciated,
the statement requires no and whose dyed and printed fabrics, in accordance
further confirmation. It with the style developed by the aesthetic move-
is an art of antiquity, but ment, are so well known. The society is well
its practice has been con- named, for not only is its home in Leek, but nearly
stant throughout the ages; the whole of the materials required for the em-
and while its variations in broidery are manufactured there ; spun silks,
appearance are many, its sewing silks, and embroidery silks being the staple
varieties of method are industries, in addition woven silks and brocades,
singularly few. The aim chenilles and many kinds of trimmings. There
of the artist in embroidery are several important dye-houses, and the print-
is to produce in low relief ing of woven fabrics is conducted on a large
a design, which with its scale. But pieces, home-made entirely, are rather
colouring shall be effective the exception than the rule, for the materials used
when seen from a dis- for the groundwork of the pieces are usually im-
tance, and to this end ported in the woven state and dyed or printed in
coloured wools, silks, and the town. These materials include a fine woollen
cottons have been used, cloth from Yorkshire, called Challie, Indian
and also gold and silver Tussur silk, silk plush, velvets, and velveteens,
threads, plates, and pre- What silk brocades are employed, however, are
cious stones both real and woven upon Leek looms. The embroidery silks
imitation. This aim has are exclusively a Leek product, but the gold
been followed unquestion- thread used comes from China,
ably up to the present The methods adopted by makers of embroidery,
time ; but in Paris the as I have said, are few, and may be broadly divided
other day I was fortunate into three classes. The simplest is where a
in being able to examine plain material is used for the ground upon which a
some specimens of silk pattern is marked out; the embroiderer works on
embroidery in high relief, this with the silks until the design is complete,
which were very effective The second is that called applique, which consists
and which open out a new in mounting pieces of embroidery already worked
field to the embroiderer, upon a plain or brocaded ground. The third
a stole which must necessarily, consists of embroidery upon printed or brocaded
however, be somewhat grounds until the original printed or woven design
restricted as the nature of the finished result is is either partly or wholly obliterated by the ap-
such as to render isolation imperative. plied stitches. This last method is the one
The chief functions of embroidery are to be adopted by the Leek School, but whereas em-
emblematic, to be historical, or to be purely de- broidery upon a woven design is comparatively
corative. The spheres in which it is to be found ancient, embroidering on a printed ground is
at the present time are broadly two—the home and peculiar to this variety, and this is the speciality
the church; for the use of embroidery to record which differentiates its work from all other classes