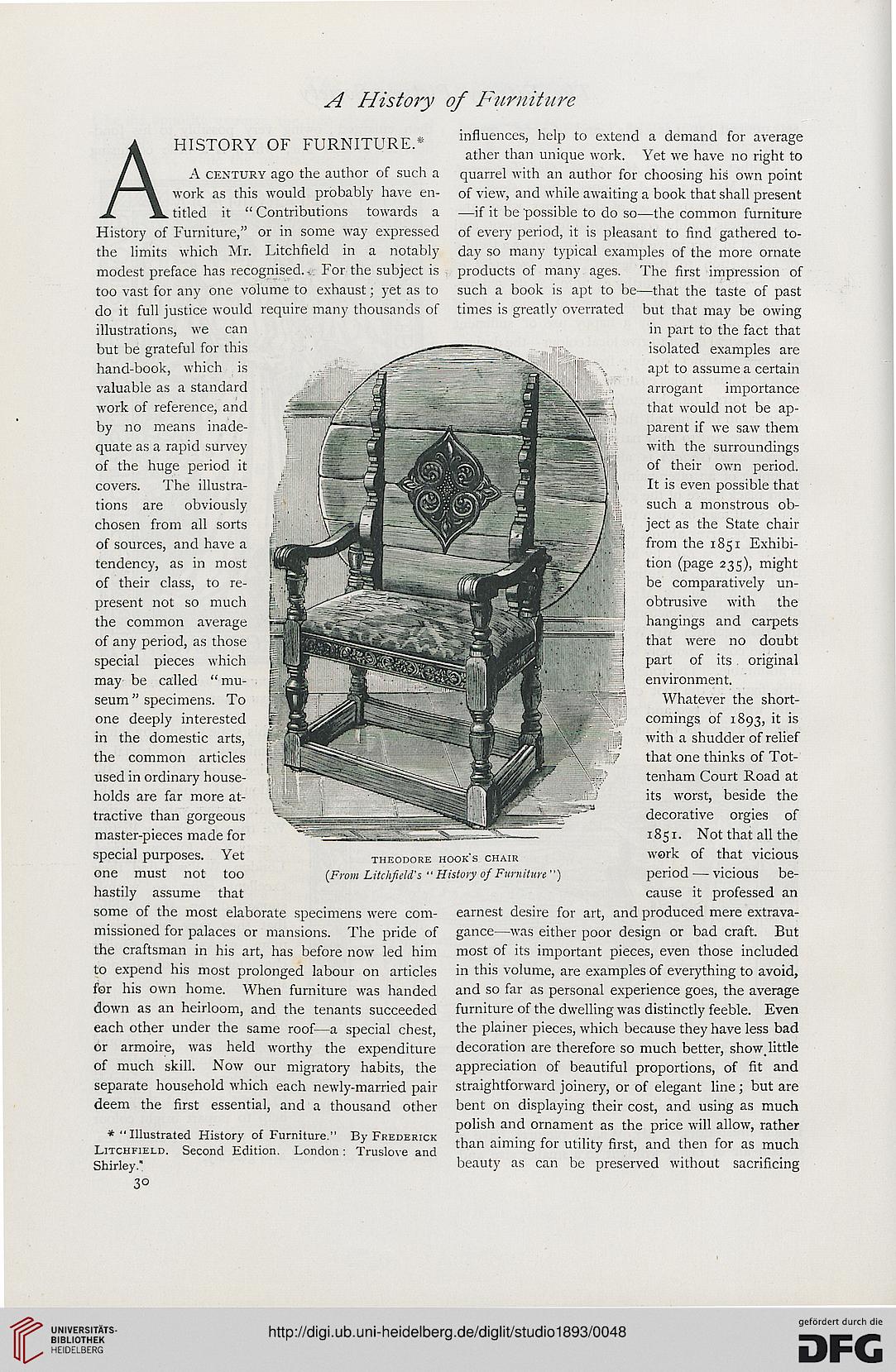 Information about OCR text
A History of Furniture

AHISTORY OF FURNITURE.* i^ences, help to extend a demand for average
ather than unique work. Yet we have no right to
A century ago the author of such a quarrel with an author for choosing his own point
work as this would probably have en- of view, and while awaiting a book that shall present
titled it " Contributions towards a —if it be possible to do so—the common furniture
History of Furniture," or in some way expressed of every period, it is pleasant to find gathered to-
the limits which Mr. Litchfield in a notably day so many typical examples of the more ornate
modest preface has recognised.. For the subject is products of many ages. The first impression of
too vast for any one volume to exhaust; yet as to such a book is apt to be—that the taste of past
do it full justice would require many thousands of times is greatly overrated but that may be owing
illustrations, we can in part to the fact that

but be grateful for this ^^jj^gjgg^^^z .,|t;1 isolated examples are

hand-book, which is - .jt''v apt to assume a certain

present not so much h EL^T Tsff obtrusive with the

hastily assume that cause it professed an

some of the most elaborate specimens were com- earnest desire for art, and produced mere extrava-
missioned for palaces or mansions. The pride of gance—was either poor design or bad craft. But
the craftsman in his art, has before now led him most of its important pieces, even those included
to expend his most prolonged labour on articles in this volume, are examples of everything to avoid,
for his own home. When furniture was handed and so far as personal experience goes, the average
down as an heirloom, and the tenants succeeded furniture of the dwelling was distinctly feeble. Even
each other under the same roof—a special chest, the plainer pieces, which because they have less bad
or armoire, was held worthy the expenditure decoration are therefore so much better, show, little
of much skill. Now our migratory habits, the appreciation of beautiful proportions, of fit and
separate household which each newly-married pair straightforward joinery, or of elegant line; but are
deem the first essential, and a thousand other bent on displaying their cost, and using as much

polish and ornament as the price will allow, rather

Shirley." beauty as can be preserved without sacrificing