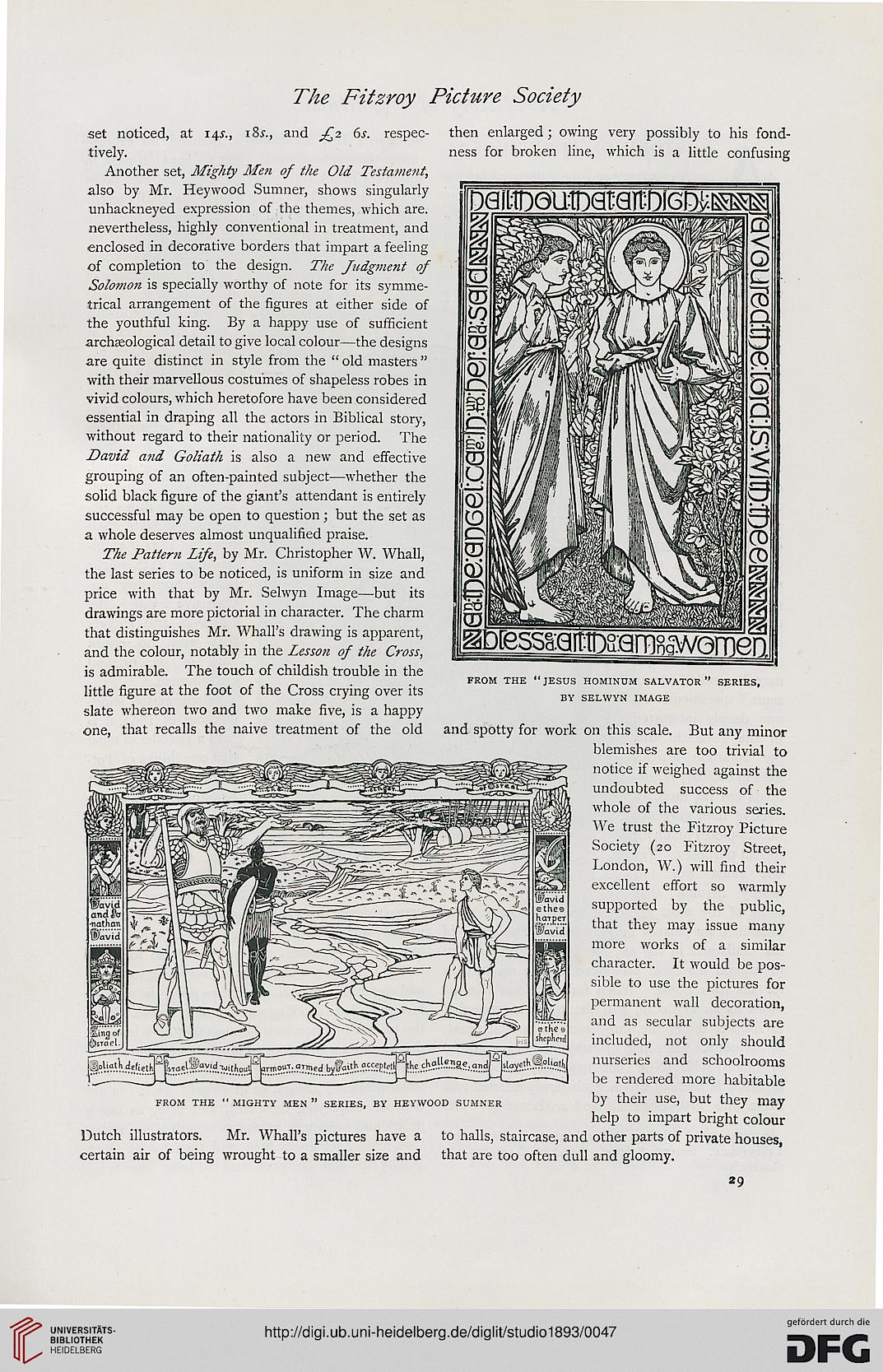 Another set, Mighty Men of the Old Testament,
also by Mr. Heywood Sumner, shows singularly
unhackneyed expression of the themes, which are.
nevertheless, highly conventional in treatment, and
enclosed in decorative borders that impart a feeling
of completion to the design. The Judgment of
Solomon is specially worthy of note for its symme-
trical arrangement of the figures at either side of
the youthful king. By a happy use of sufficient
archaeological detail to give local colour—the designs
are quite distinct in style from the " old masters "
with their marvellous costumes of shapeless robes in
vivid colours, which heretofore have been considered
essential in draping all the actors in Biblical story,
without regard to their nationality or period. The
David and Goliath is also a new and effective
grouping of an often-painted subject—whether the
solid black figure of the giant's attendant is entirely
successful may be open to question ; but the set as
a whole deserves almost unqualified praise.

The Pattern Life, by Mr. Christopher W. Whall,
the last series to be noticed, is uniform in size and
price with that by Mr. Selwyn Image—but its
drawings are more pictorial in character. The charm
that distinguishes Mr. Whall's drawing is apparent,
and the colour, notably in the Lesson of the Cross,
is admirable. The touch of childish trouble in the
little figure at the foot of the Cross crying over its
slate whereon two and two make five, is a happy
one, that recalls the naive treatment of the old and spotty for work on this scale. But any minor

blemishes are too trivial to
notice if weighed against the
undoubted success of the
whole of the various series.
We trust the Fitzroy Picture
Society (20 Fitzroy Street,
London, W.) will find their
excellent effort so warmly
supported by the public,
that they may issue many
more works of a similar
character. It would be pos-
sible to use the pictures for
permanent wall decoration,
and as secular subjects are
included, not only should
nurseries and schoolrooms
be rendered more habitable

from the "jesus hominum salvator " series,
by selwyn image

from the "mighty men" series, by heywood sumner by their use, but they may

Dutch illustrators. Mr. Whall's pictures have a to halls, staircase, and other parts of private houses,
certain air of being wrought to a smaller size and that are too often dull and gloomy.