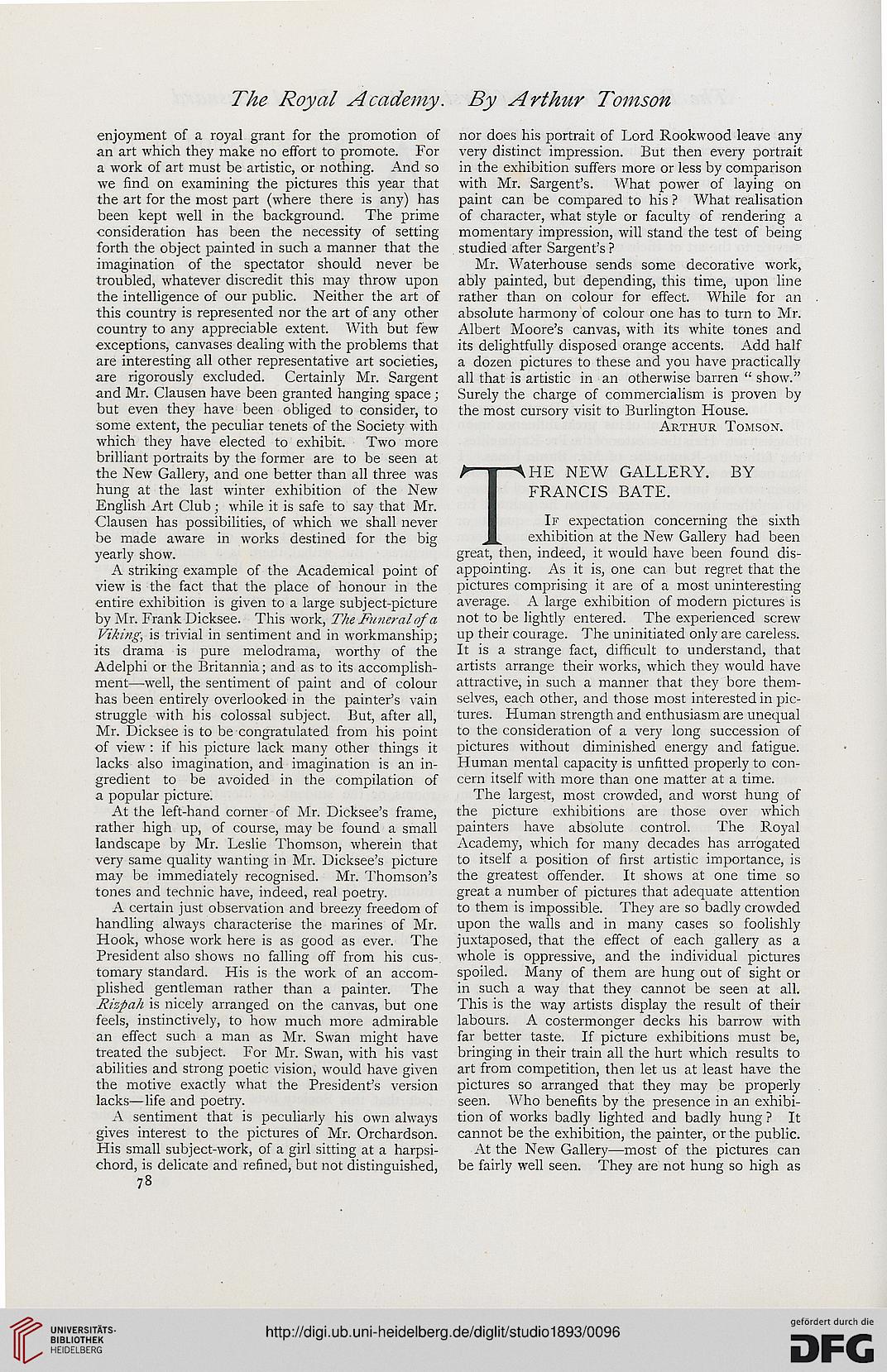 enjoyment of a royal grant for the promotion of
an art which they make no effort to promote. For
a work of art must be artistic, or nothing. And so
we find on examining the pictures this year that
the art for the most part (where there is any) has
been kept well in the background. The prime
consideration has been the necessity of setting
forth the object painted in such a manner that the
imagination of the spectator should never be
troubled, whatever discredit this may throw upon
the intelligence of our public. Neither the art of
this country is represented nor the art of any other
country to any appreciable extent. With but few
exceptions, canvases dealing with the problems that
are interesting all other representative art societies,
are rigorously excluded. Certainly Mr. Sargent
and Mr. Clausen have been granted hanging space;
but even they have been obliged to consider, to
some extent, the peculiar tenets of the Society with
which they have elected to exhibit. Two more
brilliant portraits by the former are to be seen at
the New Gallery, and one better than all three was
hung at the last winter exhibition of the New
English Art Club; while it is safe to say that Mr.
Clausen has possibilities, of which we shall never
be made aware in works destined for the big
yearly show.

A striking example of the Academical point of
view is the fact that the place of honour in the
entire exhibition is given to a large subject-picture
by Mr. Frank Dicksee. This work, The Funeral of a
Viking, is trivial in sentiment and in workmanship;
its drama is pure melodrama, worthy of the
Adelphi or the Britannia; and as to its accomplish-
ment—well, the sentiment of paint and of colour
has been entirely overlooked in the painter's vain
struggle with his colossal subject. But, after all,
Mr. Dicksee is to be congratulated from his point
of view : if his picture lack many other things it
lacks also imagination, and imagination is an in-
gredient to be avoided in the compilation of
a popular picture.

At the left-hand corner of Mr. Dicksee's frame,
rather high up, of course, may be found a small
landscape by Mr. Leslie Thomson, wherein that
very same quality wanting in Mr. Dicksee's picture
may be immediately recognised. Mr. Thomson's
tones and technic have, indeed, real poetry.

A certain just observation and breezy freedom of
handling always characterise the marines of Mr.
Hook, whose work here is as good as ever. The
President also shows no falling off from his cus-
tomary standard. His is the work of an accom-
plished gentleman rather than a painter. The
Rizpah is nicely arranged on the canvas, but one
feels, instinctively, to how much more admirable
an effect such a man as Mr. Swan might have
treated the subject. For Mr. Swan, with his vast
abilities and strong poetic vision, would have given
the motive exactly what the President's version
lacks—life and poetry.

A sentiment that is peculiarly his own always
gives interest to the pictures of Mr. Orchardson.
His small subject-work, of a girl sitting at a harpsi-
chord, is delicate and refined, but not distinguished,
78

nor does his portrait of Lord Rookwood leave any
very distinct impression. But then every portrait
in the exhibition suffers more or less by comparison
with Mr. Sargent's. What power of laying on
paint can be compared to his ? What realisation
of character, what style or faculty of rendering a
momentary impression, will stand the test of being
studied after Sargent's ?

Mr. Waterhouse sends some decorative work,
ably painted, but depending, this time, upon line
rather than on colour for effect. While for an
absolute harmony of colour one has to turn to Mr.
Albert Moore's canvas, with its white tones and
its delightfully disposed orange accents. Add half
a dozen pictures to these and you have practically
all that is artistic in an otherwise barren " show."
Surely the charge of commercialism is proven by
the most cursory visit to Burlington House.

THE NEW GALLERY. BY
FRANCIS BATE.
If expectation concerning the sixth
exhibition at the New Gallery had been
great, then, indeed, it would have been found dis-
appointing. As it is, one can but regret that the
pictures comprising it are of a most uninteresting
average. A large exhibition of modern pictures is
not to be lightly entered. The experienced screw
up their courage. The uninitiated only are careless.
It is a strange fact, difficult to understand, that
artists arrange their works, which they would have
attractive, in such a manner that they bore them-
selves, each other, and those most interested in pic-
tures. Human strength and enthusiasm are unequal
to the consideration of a very long succession of
pictures without diminished energy and fatigue.
Human mental capacity is unfitted properly to con-
cern itself with more than one matter at a time.

The largest, most crowded, and worst hung of
the picture exhibitions are those over which
painters have absolute control. The Royal
Academy, which for many decades has arrogated
to itself a position of first artistic importance, is
the greatest offender. It shows at one time so
great a number of pictures that adequate attention
to them is impossible. They are so badly crowded
upon the walls and in many cases so foolishly
juxtaposed, that the effect of each gallery as a
whole is oppressive, and the individual pictures
spoiled. Many of them are hung out of sight or
in such a way that they cannot be seen at all.
This is the way artists display the result of their
labours. A costermonger decks his barrow with
far better taste. If picture exhibitions must be,
bringing in their train all the hurt which results to
art from competition, then let us at least have the
pictures so arranged that they may be properly
seen. Who benefits by the presence in an exhibi-
tion of works badly lighted and badly hung ? It
cannot be the exhibition, the painter, or the public.

At the New Gallery—most of the pictures can
be fairly well seen. They are not hung so high as