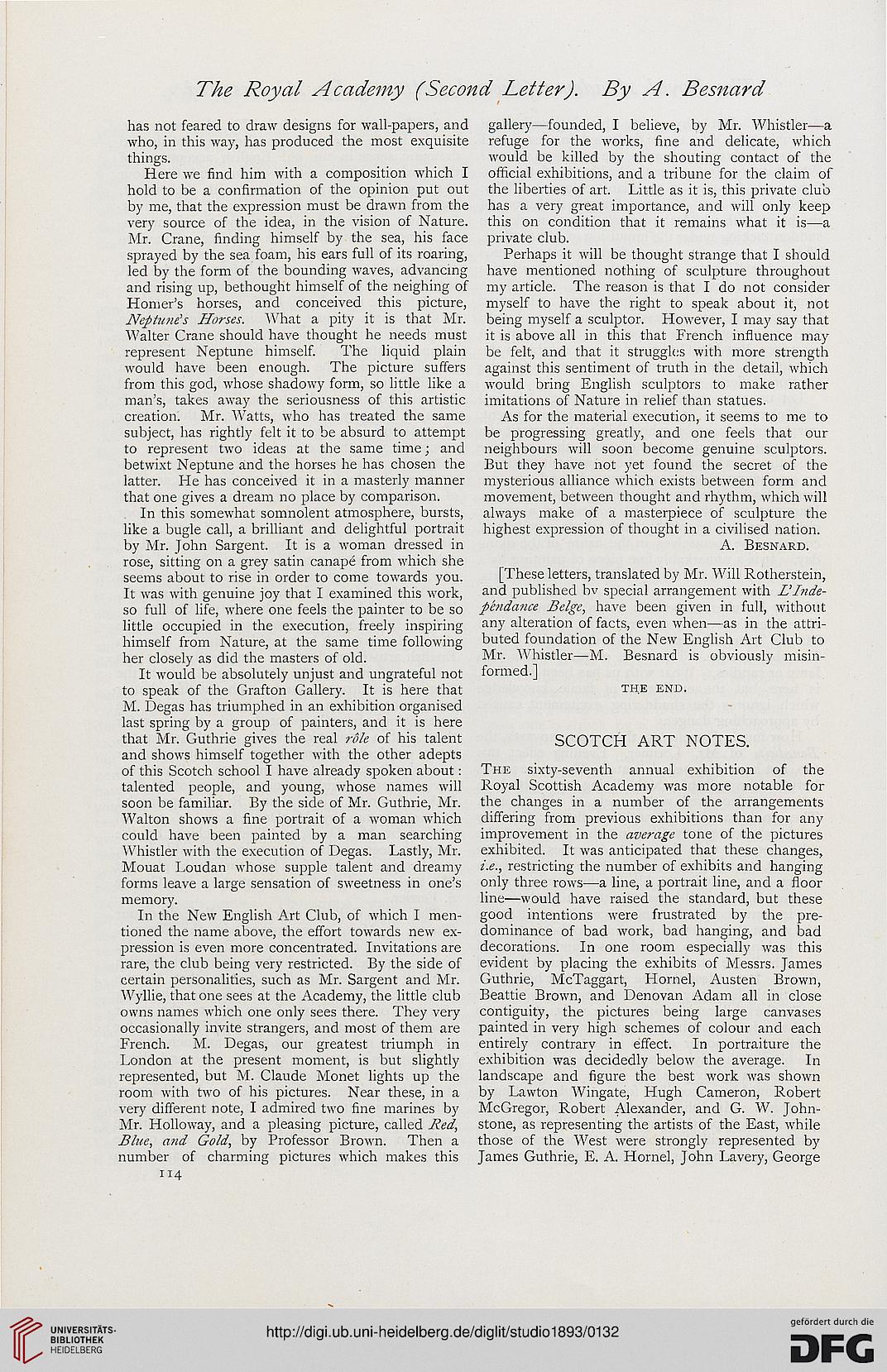 has not feared to draw designs for wall-papers, and
who, in this way, has produced the most exquisite
things.

Here we find him with a composition which I
hold to be a confirmation of the opinion put out
by me, that the expression must be drawn from the
very source of the idea, in the vision of Nature.
Mr. Crane, finding himself by the sea, his face
sprayed by the sea foam, his ears full of its roaring,
led by the form of the bounding waves, advancing
and rising up, bethought himself of the neighing of
Homer's horses, and conceived this picture,
Neptune's Horses. What a pity it is that Mr.
Walter Crane should have thought he needs must
represent Neptune himself. The liquid plain
would have been enough. The picture suffers
from this god, whose shadowy form, so little like a
man's, takes away the seriousness of this artistic
creation. Mr. Watts, who has treated the same
subject, has rightly felt it to be absurd to attempt
to represent two ideas at the same time; and
betwixt Neptune and the horses he has chosen the
latter. He has conceived it in a masterly manner
that one gives a dream no place by comparison.

In this somewhat somnolent atmosphere, bursts,
like a bugle call, a brilliant and delightful portrait
by Mr. John Sargent. It is a woman dressed in
rose, sitting on a grey satin canape from which she
seems about to rise in order to come towards you.
It was with genuine joy that I examined this work,
so full of life, where one feels the painter to be so
little occupied in the execution, freely inspiring
himself from Nature, at the same time following
her closely as did the masters of old.

It would be absolutely unjust and ungrateful not
to speak of the Grafton Gallery. It is here that
M. Degas has triumphed in an exhibition organised
last spring by a group of painters, and it is here
that Mr. Guthrie gives the real role of his talent
and shows himself together with the other adepts
of this Scotch school I have already spoken about:
talented people, and young, whose names will
soon be familiar. By the side of Mr. Guthrie, Mr.
Walton shows a fine portrait of a woman which
could have been painted by a man searching
Whistler with the execution of Degas. Lastly, Mr.
Mouat Loudan whose supple talent and dreamy
forms leave a large sensation of sweetness in one's
memory.

In the New English Art Club, of which I men-
tioned the name above, the effort towards new ex-
pression is even more concentrated. Invitations are
rare, the club being very restricted. By the side of
certain personalities, such as Mr. Sargent and Mr.
Wyllie, that one sees at the Academy, the little club
owns names which one only sees there. They very
occasionally invite strangers, and most of them are
French. M. Degas, our greatest triumph in
London at the present moment, is but slightly
represented, but M. Claude Monet lights up the
room with two of his pictures. Near these, in a
very different note, I admired two fine marines by
Mr. Holloway, and a pleasing picture, called Red,
Blue, and Gold, by Professor Brown. Then a
number of charming pictures which makes this
114

gallery—founded, I believe, by Mr. Whistler—a
refuge for the works, fine and delicate, which
would be killed by the shouting contact of the
official exhibitions, and a tribune for the claim of
the liberties of art. Little as it is, this private club
has a very great importance, and will only keep
this on condition that it remains what it is—a
private club.

Perhaps it will be thought strange that I should
have mentioned nothing of sculpture throughout
my article. The reason is that I do not consider
myself to have the right to speak about it, not
being myself a sculptor. However, I may say that
it is above all in this that French influence may
be felt, and that it struggles with more strength
against this sentiment of truth in the detail, which
would bring English sculptors to make rather
imitations of Nature in relief than statues.

As for the material execution, it seems to me to
be progressing greatly, and one feels that our
neighbours will soon become genuine sculptors.
But they have not yet found the secret of the
mysterious alliance which exists between form and
movement, between thought and rhythm, which will
always make of a masterpiece of sculpture the
highest expression of thought in a civilised nation.

[These letters, translated by Mr. Will Rotherstein,
and published bv special arrangement with L'lnde-
pendtmce Beige, have been given in full, without
any alteration of facts, even when—as in the attri-
buted foundation of the New English Art Club to
Mr. Whistler—M. Besnard is obviously misin-
formed.]

The sixty-seventh annual exhibition of the
Royal Scottish Academy was more notable for
the changes in a number of the arrangements
differing from previous exhibitions than for any
improvement in the average tone of the pictures
exhibited. It was anticipated that these changes,
i.e., restricting the number of exhibits and hanging
only three rows—a line, a portrait line, and a floor
line—would have raised the standard, but these
good intentions were frustrated by the pre-
dominance of bad work, bad hanging, and bad
decorations. In one room especially was this
evident by placing the exhibits of Messrs. James
Guthrie, McTaggart, Hornel, Austen Brown,
Beattie Brown, and Denovan Adam all in close
contiguity, the pictures being large canvases
painted in very high schemes of colour and each
entirely contrary in effect. In portraiture the
exhibition was decidedly below the average. In
landscape and figure the best work was shown
by Lawton Wingate, Hugh Cameron, Robert
McGregor, Robert Alexander, and G. W. John-
stone, as representing the artists of the East, while
those of the West were strongly represented by
James Guthrie, E. A. Hornel, John Lavery, George