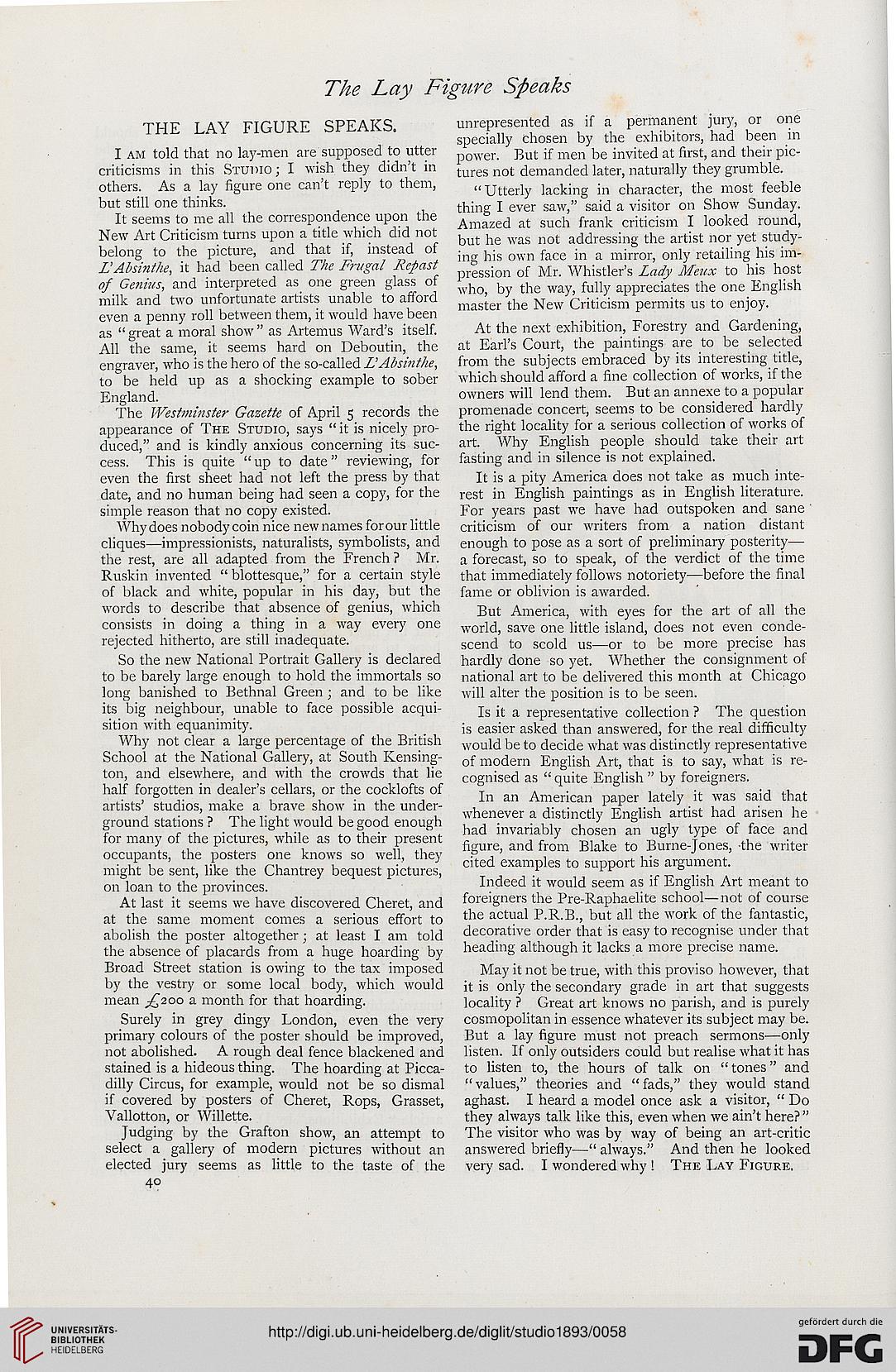 I am told that no lay-men are supposed to utter
criticisms in this Studio; I wish they didn't in
others. As a lay figure one can't reply to them,
but still one thinks.

It seems to me all the correspondence upon the
New Art Criticism turns upon a title which did not
belong to the picture, and that if, instead of
L'Absinthe, it had been called The Frugal Repast
of Genius, and interpreted as one green glass of
milk and two unfortunate artists unable to afford
even a penny roll between them, it would have been
as "great a moral show" as Artemus Ward's itself.
All the same, it seems hard on Deboutin, the
engraver, who is the hero of the so-called L'Absinthe,
to be held up as a shocking example to sober
England.

The Westminster Gazette of April 5 records the
appearance of The Studio, says " it is nicely pro-
duced," and is kindly anxious concerning its suc-
cess. This is quite " up to date" reviewing, for
even the first sheet had not left the press by that
date, and no human being had seen a copy, for the
simple reason that no copy existed.

Why does nobody coin nice new names forour little
cliques—impressionists, naturalists, symbolists, and
the rest, are all adapted from the French ? Mr.
Ruskin invented " blottesque," for a certain style
of black and white, popular in his day, but the
words to describe that absence of genius, which
consists in doing a thing in a way every one
rejected hitherto, are still inadequate.

So the new National Portrait Gallery is declared
to be barely large enough to hold the immortals so
long banished to Bethnal Green ; and to be like
its big neighbour, unable to face possible acqui-
sition with equanimity.

Why not clear a large percentage of the British
School at the National Gallery, at South Kensing-
ton, and elsewhere, and with the crowds that lie
half forgotten in dealer's cellars, or the cocklofts of
artists' studios, make a brave show in the under-
ground stations ? The light would be good enough
for many of the pictures, while as to their present
occupants, the posters one knows so well, they
might be sent, like the Chantrey bequest pictures,
on loan to the provinces.

At last it seems we have discovered Cheret, and
at the same moment comes a serious effort to
abolish the poster altogether; at least I am told
the absence of placards from a huge hoarding by
Broad Street station is owing to the tax imposed
by the vestry or some local body, which would
mean £200 a month for that hoarding.

Surely in grey dingy London, even the very
primary colours of the poster should be improved,
not abolished. A rough deal fence blackened and
stained is a hideous thing. The hoarding at Picca-
dilly Circus, for example, would not be so dismal
if covered by posters of Cheret, Rops, Grasset,
Vallotton, or Willette.

Judging by the Grafton show, an attempt to
select a gallery of modern pictures without an
elected jury seems as little to the taste of the
40

unrepresented as if a permanent jury, or one
specially chosen by the exhibitors, had been in
power. But if men be invited at first, and their pic-
tures not demanded later, naturally they grumble.

"Utterly lacking in character, the most feeble
thing I ever saw," said a visitor on Show Sunday.
Amazed at such frank criticism I looked round,
but he was not addressing the artist nor yet study-
ing his own face in a mirror, only retailing his im-
pression of Mr. Whistler's Lady Meux to his host
who, by the way, fully appreciates the one English
master the New Criticism permits us to enjoy.

At the next exhibition, Forestry and Gardening,
at Earl's Court, the paintings are to be selected
from the subjects embraced by its interesting title,
which should afford a fine collection of works, if the
owners will lend them. But an annexe to a popular
promenade concert, seems to be considered hardly
the right locality for a serious collection of works of
art. Why English people should take their art
fasting and in silence is not explained.

It is a pity America does not take as much inte-
rest in English paintings as in English literature.
For years past we have had outspoken and sane
criticism of our writers from a nation distant
enough to pose as a sort of preliminary posterity—
a forecast, so to speak, of the verdict of the time
that immediately follows notoriety—before the final
fame or oblivion is awarded.

But America, with eyes for the art of all the
world, save one little island, does not even conde-
scend to scold us—or to be more precise has
hardly done so yet. Whether the consignment of
national art to be delivered this month at Chicago
will alter the position is to be seen.

Is it a representative collection ? The question
is easier asked than answered, for the real difficulty
would be to decide what was distinctly representative
of modern English Art, that is to say, what is re-
cognised as " quite English " by foreigners.

In an American paper lately it was said that
whenever a distinctly English artist had arisen he
had invariably chosen an ugly type of face and
figure, and from Blake to Burne-jones, the writer
cited examples to support his argument.

Indeed it would seem as if English Art meant to
foreigners the Pre-Raphaelite school—not of course
the actual P.R.B., but all the work of the fantastic,
decorative order that is easy to recognise under that
heading although it lacks a more precise name.

May it not be true, with this proviso however, that
it is only the secondary grade in art that suggests
locality ? Great art knows no parish, and is purely
cosmopolitan in essence whatever its subject may be.
But a lay figure must not preach sermons—only
listen. If only outsiders could but realise what it has
to listen to, the hours of talk on "tones" and
"values," theories and "fads," they would stand
aghast. I heard a model once ask a visitor, " Do
they always talk like this, even when we ain't here? "
The visitor who was by way of being an art-critic
answered briefly—" always." And then he looked
very sad. I wondered why ! The Lay Figure.