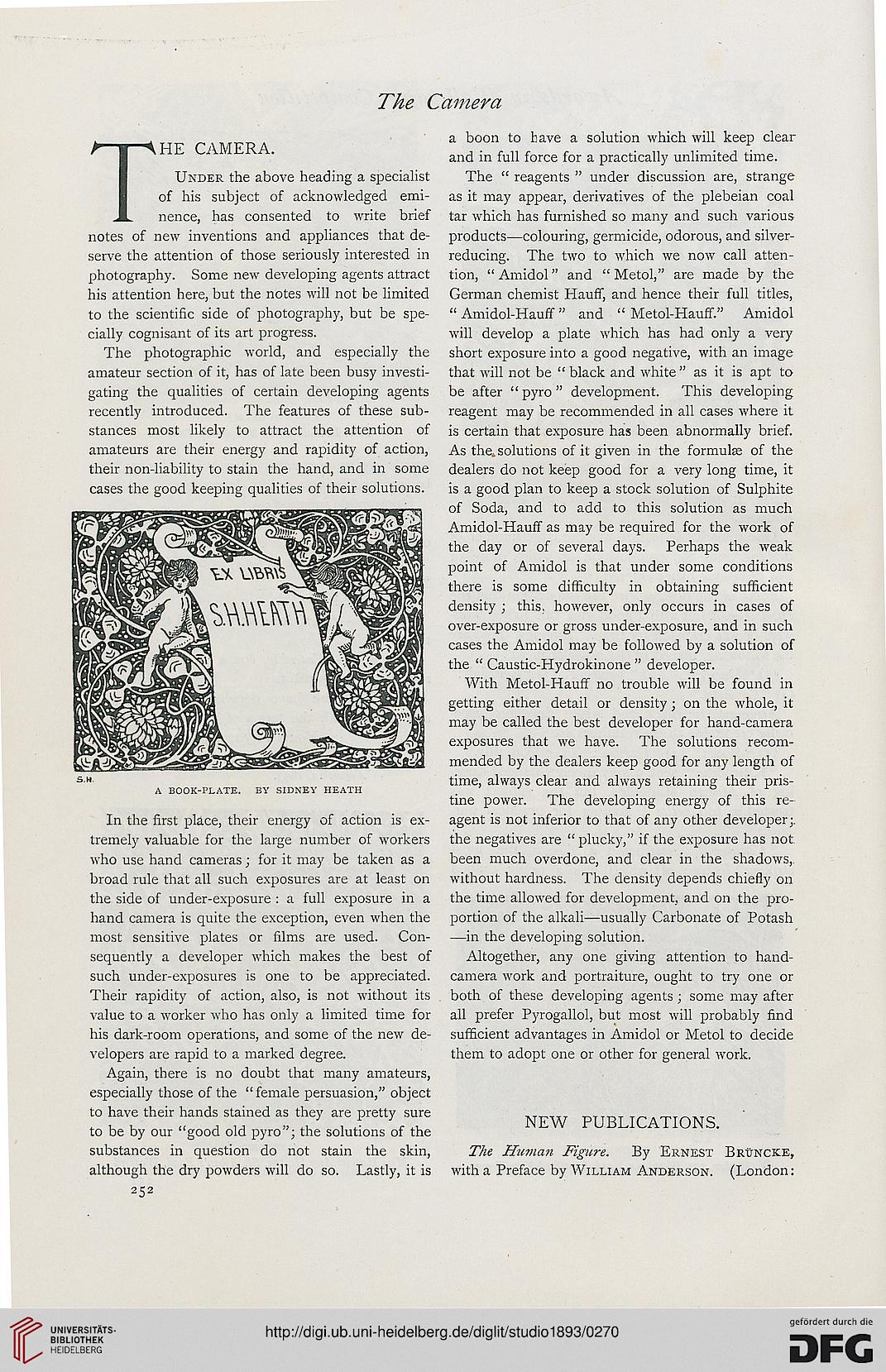 HE CAMERA. and Jn fulJ force for a practically uniim;ted time.

Under the above heading a specialist The " reagents " under discussion are, strange
of his subject of acknowledged emi- as it may appear, derivatives of the plebeian coal
nence, has consented to write brief tar which has furnished so many and such various
notes of new inventions and appliances that de- products—colouring, germicide, odorous, and silver-
serve the attention of those seriously interested in reducing. The two to which we now call atten-
photography. Some new developing agents attract tion, " Amidol " and " Metol," are made by the
his attention here, but the notes will not be limited German chemist Hauff, and hence their full titles,
to the scientific side of photography, but be spe- " Amidol-Hauff " and " Metol-Hauff." Amidol
cially cognisant of its art progress. will develop a plate which has had only a very

The photographic world, and especially the short exposure into a good negative, with an image
amateur section of it, has of late been busy investi- that will not be " black and white " as it is apt to
gating the qualities of certain developing agents be after " pyro " development. This developing
recently introduced. The features of these sub- reagent may be recommended in all cases where it
stances most likely to attract the attention of is certain that exposure has been abnormally brief,
amateurs are their energy and rapidity of action, As the. solutions of it given in the formulas of the
their non-liability to stain the hand, and in some dealers do not keep good for a very long time, it
cases the good keeping qualities of their solutions. is a good plan to keep a stock solution of Sulphite

of Soda, and to add to this solution as much
Amidol-Hauff as may be required for the work of
the day or of several days. Perhaps the weak
point of Amidol is that under some conditions
there is some difficulty in obtaining sufficient
density ; this, however, only occurs in cases of
over-exposure or gross under-exposure, and in such
cases the Amidol may be followed by a solution of
the " Caustic-Hydrokinone " developer.

With Metol-Hauff no trouble will be found in
getting either detail or density; on the whole, it
may be called the best developer for hand-camera
exposures that we have. The solutions recom-
mended by the dealers keep good for any length of
time, always clear and always retaining their pris-
tine power. The developing energy of this re-
in the first place, their energy of action is ex- agent is not inferior to that of any other developer;,
tremely valuable for the large number of workers the negatives are " plucky," if the exposure has not.
who use hand cameras; for it may be taken as a been much overdone, and clear in the shadows,
broad rule that all such exposures are at least on without hardness. The density depends chiefly on
the side of under-exposure : a full exposure in a the time allowed for development, and on the pro-
hand camera is quite the exception, even when the portion of the alkali—usually Carbonate of Potash
most sensitive plates or films are used. Con- —in the developing solution.

sequently a developer which makes the best of Altogether, any one giving attention to hand-
such under-exposures is one to be appreciated, camera work and portraiture, ought to try one or
Their rapidity of action, also, is not without its both of these developing agents ; some may after
value to a worker who has only a limited time for all prefer Pyrogallol, but most will probably find
his dark-room operations, and some of the new de- sufficient advantages in Amidol or Metol to decide
velopers are rapid to a marked degree. them to adopt one or other for general work.

Again, there is no doubt that many amateurs,
especially those of the "female persuasion," object
to have their hands stained as they are pretty sure
to be by our "good old pyro"; the solutions of the
substances in question do not stain the skin, The Human Figure. By Ernest BRtiNCKE,
although the dry powders will do so. Lastly, it is with a Preface by William Anderson. (London:
252

A BOOK-PLATE. BY SIDNEY HEATH