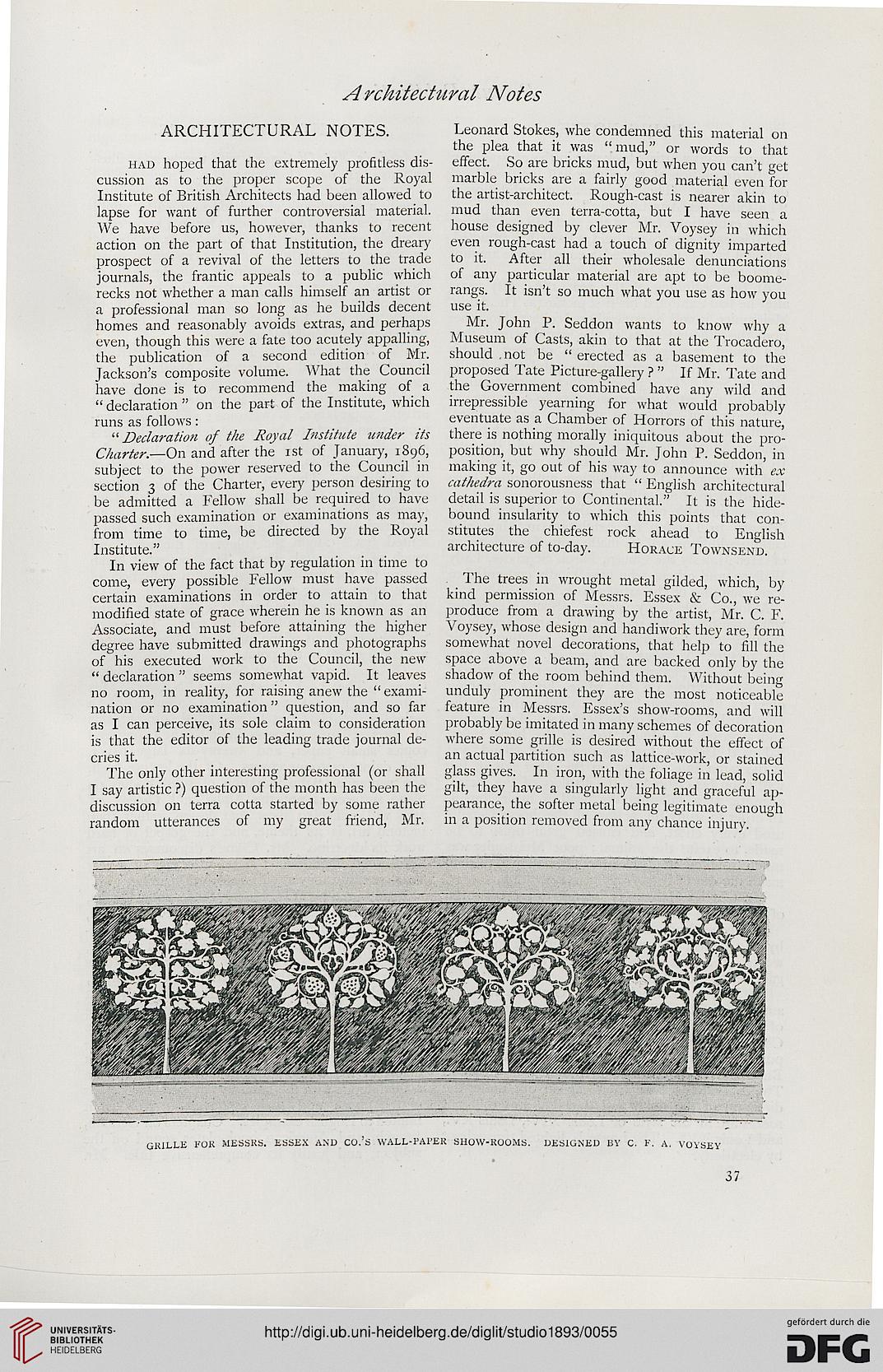 had hoped that the extremely profitless dis-
cussion as to the proper scope of the Royal
Institute of British Architects had been allowed to
lapse for want of further controversial material.
We have before us, however, thanks to recent
action on the part of that Institution, the dreary
prospect of a revival of the letters to the trade
journals, the frantic appeals to a public which
recks not whether a man calls himself an artist or
a professional man so long as he builds decent
homes and reasonably avoids extras, and perhaps
even, though this were a fate too acutely appalling,
the publication of a second edition of Mr.
Jackson's composite volume. What the Council
have done is to recommend the making of a
" declaration " on the part of the Institute, which
runs as follows:

"Declaration of the Royal Institute under its
Charter.—On and after the ist of January, 1896,
subject to the power reserved to the Council in
section 3 of the Charter, every person desiring to
be admitted a Fellow shall be required to have
passed such examination or examinations as may,
from time to time, be directed by the Royal
Institute."

In view of the fact that by regulation in time to
come, every possible Fellow must have passed
certain examinations in order to attain to that
modified state of grace wherein he is known as an
Associate, and must before attaining the higher
degree have submitted drawings and photographs
of his executed work to the Council, the new
" declaration " seems somewhat vapid. It leaves
no room, in reality, for raising anew the " exami-
nation or no examination" question, and so far
as I can perceive, its sole claim to consideration
is that the editor of the leading trade journal de-
cries it.

The only other interesting professional (or shall
I say artistic ?) question of the month has been the
discussion on terra cotta started by some rather
random utterances of my great friend, Mr.

Leonard Stokes, whe condemned this material on
the plea that it was " mud," or words to that
effect. So are bricks mud, but when you can't get
marble bricks are a fairly good material even for
the artist-architect. Rough-cast is nearer akin to
mud than even terra-cotta, but I have seen a
house designed by clever Mr. Voysey in which
even rough-cast had a touch of dignity imparted
to it. After all their wholesale denunciations
of any particular material are apt to be boome-
rangs. It isn't so much what you use as how you
use it.

Mr. John P. Seddon wants to know why a
Museum of Casts, akin to that at the Trocadero,
should .not be " erected as a basement to the
proposed Tate Picture-gallery ? " If Mr. Tate and
the Government combined have any wild and
irrepressible yearning for what would probably
eventuate as a Chamber of Horrors of this nature,
there is nothing morally iniquitous about the pro-
position, but why should Mr. John P. Seddon, in
making it, go out of his way to announce with ex
cathedra sonorousness that " English architectural
detail is superior to Continental." It is the hide-
bound insularity to which this points that con-
stitutes the chiefest rock ahead to English
architecture of to-day. Horace Townsend.

The trees in wrought metal gilded, which, by
kind permission of Messrs. Essex & Co., we re-
produce from a drawing by the artist, Mr. C. F.
Voysey, whose design and handiwork they are, form
somewhat novel decorations, that help to fill the
space above a beam, and are backed only by the
shadow of the room behind them. Without being
unduly prominent they are the most noticeable
feature in Messrs. Essex's show-rooms, and will
probably be imitated in many schemes of decoration
where some grille is desired without the effect of
an actual partition such as lattice-work, or stained
glass gives. In iron, with the foliage in lead, solid
gilt, they have a singularly light and graceful ap-
pearance, the softer metal being legitimate enough
in a position removed from any chance injury.