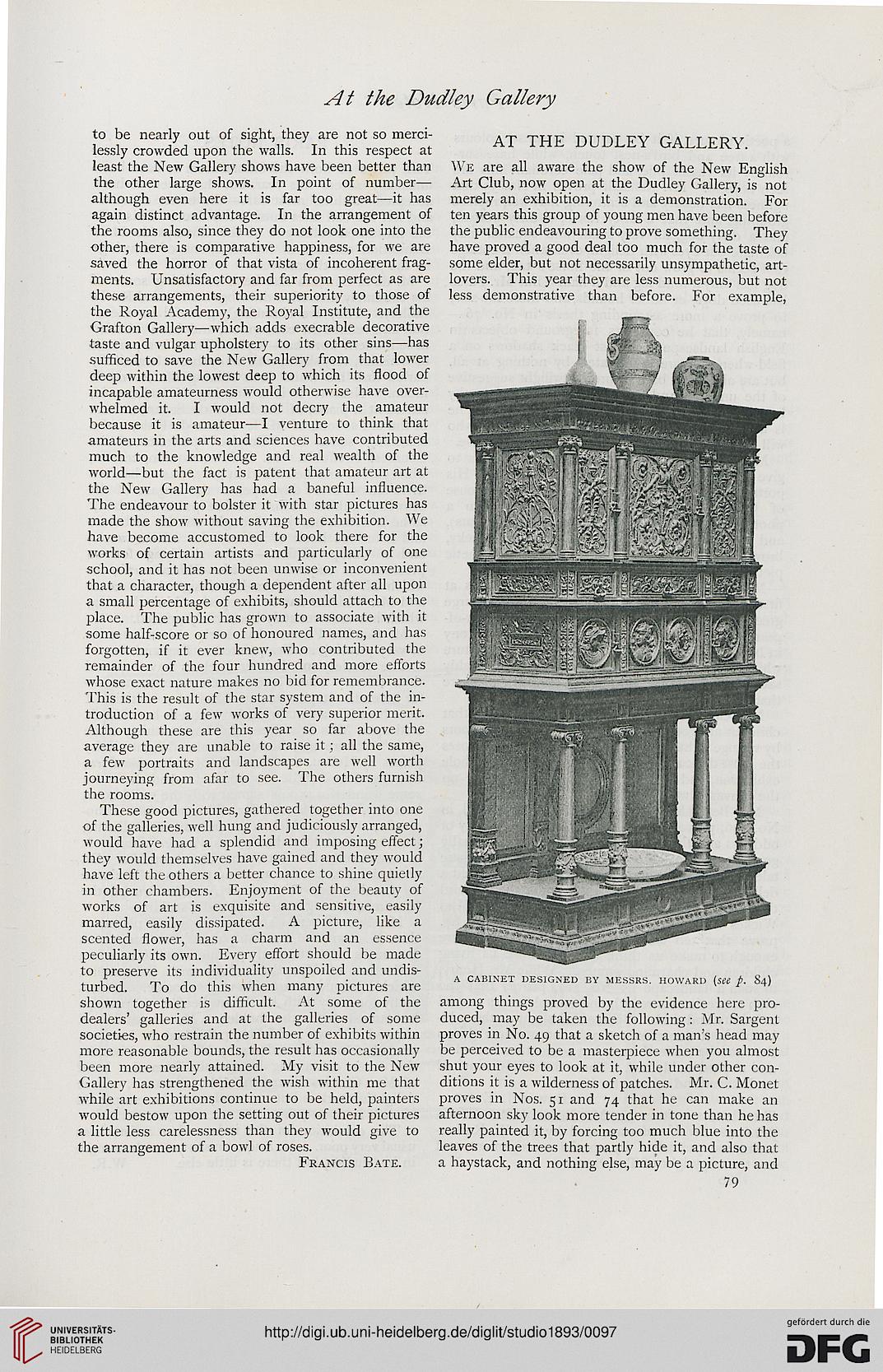 to be nearly out of sight, they are not so merci-
lessly crowded upon the walls. In this respect at
least the New Gallery shows have been better than
the other large shows. In point of number—
although even here it is far too great—it has
again distinct advantage. In the arrangement of
the rooms also, since they do not look one into the
other, there is comparative happiness, for we are
saved the horror of that vista of incoherent frag-
ments. Unsatisfactory and far from perfect as are
these arrangements, their superiority to those of
the Royal Academy, the Royal Institute, and the
Grafton Gallery—which adds execrable decorative
taste and vulgar upholstery to its other sins—has
.sufficed to save the New Gallery from that lower
deep within the lowest deep to which its flood of
incapable amateurness would otherwise have over-
whelmed it. I would not decry the amateur
because it is amateur—I venture to think that
amateurs in the arts and sciences have contributed
much to the knowledge and real wealth of the
world—but the fact is patent that amateur art at
the New Gallery has had a baneful influence.
The endeavour to bolster it with star pictures has
made the show without saving the exhibition. We
have become accustomed to look there for the
works of certain artists and particularly of one
school, and it has not been unwise or inconvenient
that a character, though a dependent after all upon
a small percentage of exhibits, should attach to the
place. The public has grown to associate with it
some half-score or so of honoured names, and has
forgotten, if it ever knew, who contributed the
remainder of the four hundred and more efforts
whose exact nature makes no bid for remembrance.
This is the result of the star system and of the in-
troduction of a few works of very superior merit.
Although these are this year so far above the
average they are unable to raise it; all the same,
a few portraits and landscapes are well worth
journeying from afar to see. The others furnish
the rooms.

These good pictures, gathered together into one
of the galleries, well hung and judiciously arranged,
would have had a splendid and imposing effect;
they would themselves have gained and they would
have left the others a better chance to shine quietly
in other chambers. Enjoyment of the beauty of
works of art is exquisite and sensitive, easily
marred, easily dissipated. A picture, like a
scented flower, has a charm and an essence
peculiarly its own. Every effort should be made
to preserve its individuality unspoiled and undis-
turbed. To do this when many pictures are
shown together is difficult. At some of the
dealers' galleries and at the galleries of some
societies, who restrain the number of exhibits within
more reasonable bounds, the result has occasionally
been more nearly attained. My visit to the New
Gallery has strengthened the wish within me that
while art exhibitions continue to be held, painters
would bestow upon the setting out of their pictures
a little less carelessness than they would give to
the arrangement of a bowl of roses.

AT THE DUDLEY GALLERY.

We are all aware the show of the New English
Art Club, now open at the Dudley Gallery, is not
merely an exhibition, it is a demonstration. For
ten years this group of young men have been before
the public endeavouring to prove something. They
have proved a good deal too much for the taste of
some elder, but not necessarily unsympathetic, art-
lovers. This year they are less numerous, but not
less demonstrative than before. For example,

among things proved by the evidence here pro-
duced, may be taken the following: Mr. Sargent
proves in No. 49 that a sketch of a man's head may
be perceived to be a masterpiece when you almost
shut your eyes to look at it, while under other con-
ditions it is a wilderness of patches. Mr. C. Monet
proves in Nos. 51 and 74 that he can make an
afternoon sky look more tender in tone than he has
really painted it, by forcing too much blue into the
leaves of the trees that partly hide it, and also that
a haystack, and nothing else, may be a picture, and