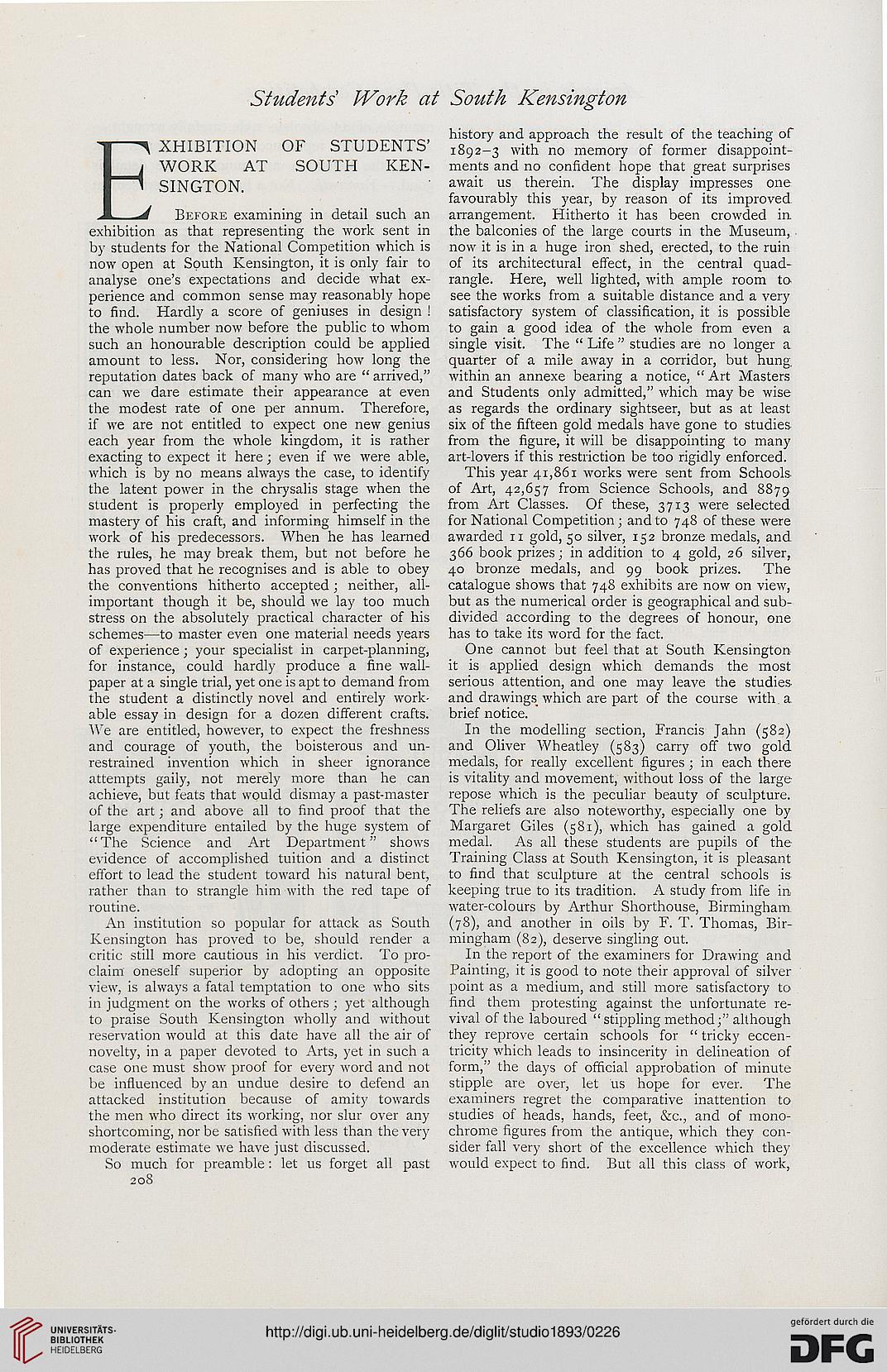 E, XHIBITION OF STUDENTS'
i WORK AT SOUTH KEN-
' SINGTON.
J Before examining in detail such an
exhibition as that representing the work sent in
by students for the National Competition which is
now open at South Kensington, it is only fair to
analyse one's expectations and decide what ex-
perience and common sense may reasonably hope
to find. Hardly a score of geniuses in design !
the whole number now before the public to whom
such an honourable description could be applied
amount to less. Nor, considering how long the
reputation dates back of many who are " arrived,"
can we dare estimate their appearance at even
the modest rate of one per annum. Therefore,
if we are not entitled to expect one new genius
each year from the whole kingdom, it is rather
exacting to expect it here; even if we were able,
which is by no means always the case, to identify
the latent power in the chrysalis stage when the
student is properly employed in perfecting the
mastery of his craft, and informing himself in the
work of his predecessors. When he has learned
the rules, he may break them, but not before he
has proved that he recognises and is able to obey
the conventions hitherto accepted; neither, all-
important though it be, should we lay too much
stress on the absolutely practical character of his
schemes—to master even one material needs years
of experience; your specialist in carpet-planning,
for instance, could hardly produce a fine wall-
paper at a single trial, yet one is apt to demand from
the student a distinctly novel and entirely work-
able essay in design for a dozen different crafts.
We are entitled, however, to expect the freshness
and courage of youth, the boisterous and un-
restrained invention which in sheer ignorance
attempts gaily, not merely more than he can
achieve, but feats that would dismay a past-master
of the art; and above all to find proof that the
large expenditure entailed by the huge system of
"The Science and Art Department" shows
evidence of accomplished tuition and a distinct
effort to lead the student toward his natural bent,
rather than to strangle him with the red tape of
routine.

An institution so popular for attack as South
Kensington has proved to be, should render a
critic still more cautious in his verdict. To pro-
claim oneself superior by adopting an opposite
view, is always a fatal temptation to one who sits
in judgment on the works of others ; yet although
to praise South Kensington wholly and without
reservation would at this date have all the air of
novelty, in a paper devoted to Arts, yet in such a
case one must show proof for every word and not
be influenced by an undue desire to defend an
attacked institution because of amity towards
the men who direct its working, nor slur over any
shortcoming, nor be satisfied with less than the very
moderate estimate we have just discussed.

So much for preamble: let us forget all past
208

history and approach the result of the teaching of
1892-3 with no memory of former disappoint-
ments and no confident hope that great surprises
await us therein. The display impresses one
favourably this year, by reason of its improved
arrangement. Hitherto it has been crowded in
the balconies of the large courts in the Museum,
now it is in a huge iron shed, erected, to the ruin
of its architectural effect, in the central quad-
rangle. Here, well lighted, with ample room to
see the works from a suitable distance and a very
satisfactory system of classification, it is possible
to gain a good idea of the whole from even a
single visit. The " Life " studies are no longer a
quarter of a mile away in a corridor, but hung
within an annexe bearing a notice, " Art Masters
and Students only admitted," which may be wise
as regards the ordinary sightseer, but as at least
six of the fifteen gold medals have gone to studies
from the figure, it will be disappointing to many
art-lovers if this restriction be too rigidly enforced.

This year 41,861 works were sent from Schools
of Art, 42,657 from Science Schools, and 8879
from Art Classes. Of these, 3713 were selected
for National Competition; and to 748 of these were
awarded 11 gold, 50 silver, 152 bronze medals, and
366 book prizes; in addition to 4 gold, 26 silver,
40 bronze medals, and 99 book prizes. The
catalogue shows that 748 exhibits are now on view,
but as the numerical order is geographical and sub-
divided according to the degrees of honour, one
has to take its word for the fact.

One cannot but feel that at South Kensington
it is applied design which demands the most
serious attention, and one may leave the studies
and drawings_ which are part of the course with. a
brief notice.

In the modelling section, Francis Jahn (582)
and Oliver Wheatley (583) carry off two gold
medals, for really excellent figures ; in each there
is vitality and movement, without loss of the large
repose which is the peculiar beauty of sculpture.
The reliefs are also noteworthy, especially one by
Margaret Giles (581), which has gained a gold
medal. As all these students are pupils of the
Training Class at South Kensington, it is pleasant
to find that sculpture at the central schools is
keeping true to its tradition. A study from life in
water-colours by Arthur Shorthouse, Birmingham
(78), and another in oils by F. T. Thomas, Bir-
mingham (82), deserve singling out.

In the report of the examiners for Drawing and
Painting, it is good to note their approval of silver
point as a medium, and still more satisfactory to
find them protesting against the unfortunate re-
vival of the laboured "stippling method;" although
they reprove certain schools for " tricky eccen-
tricity which leads to insincerity in delineation of
form," the days of official approbation of minute
stipple are over, let us hope for ever. The
examiners regret the comparative inattention to
studies of heads, hands, feet, &c, and of mono-
chrome figures from the antique, which they con-
sider fall very short Of the excellence which they
would expect to find. But all this class of work,