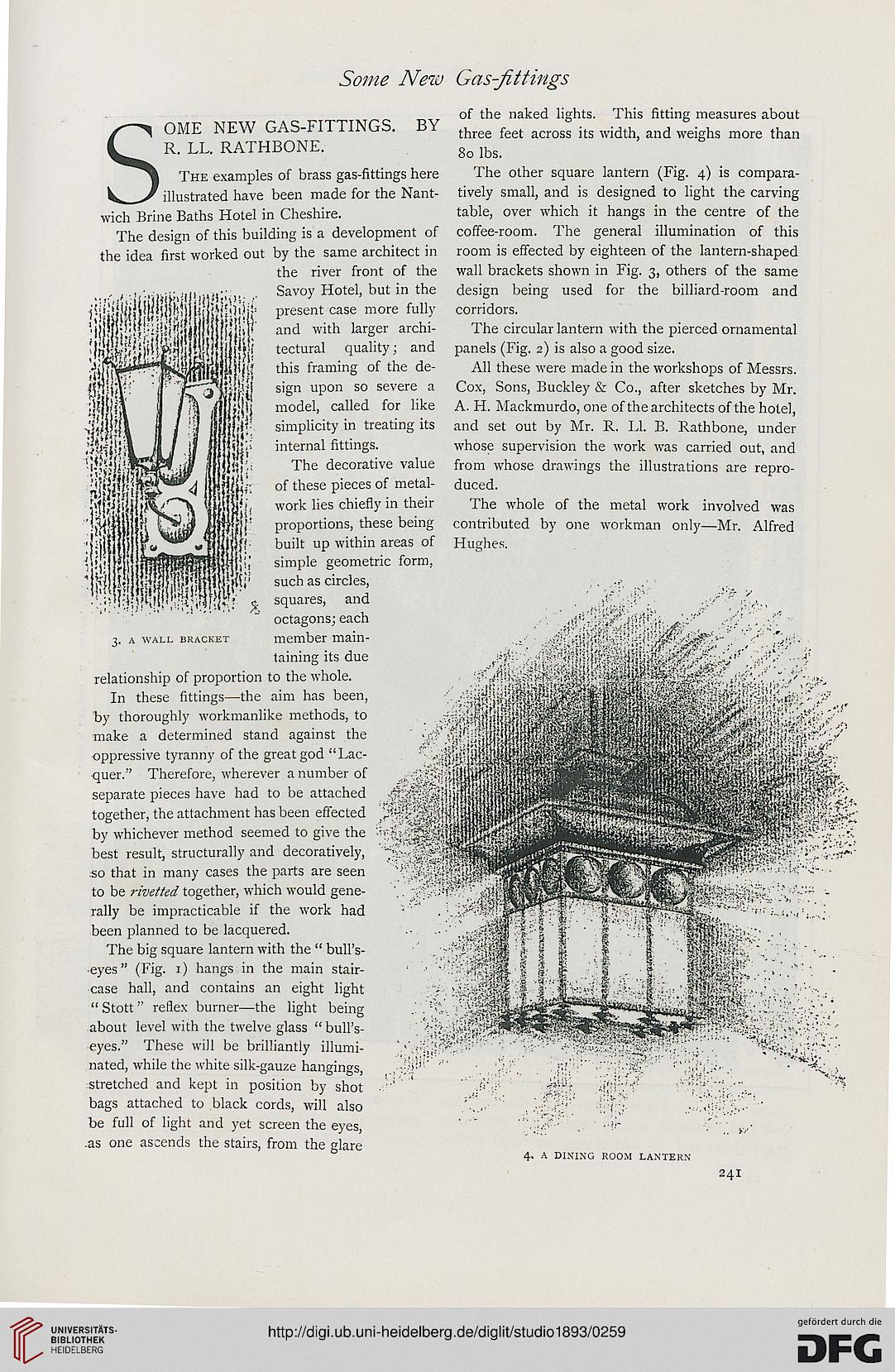 of the naked lights. This fitting measures about

The examples of brass gas-fittings here The other square lantern (Fig. 4) is compara-

illustrated have been made for the Nant- tively small, and is designed to light the carving

wich Brine Baths Hotel in Cheshire. table, over which it hangs in the centre of the

The design of this building is a development of coffee-room. The general illumination of this

the river front of the wall brackets shown in Fig. 3, others of the same

Savoy Hotel, but in the design being used for the billiard-room and

and with larger archi- The circular lantern with the pierced ornamental
tectural quality; and panels (Fig. 2) is also a good size,
this framing of the de- All these were made in the workshops of Messrs.
sign upon so severe a Cox, Sons, Buckley & Co., after sketches by Mr.
model, called for like A. H. Mackmurdo, one of the architects of the hotel,
simplicity in treating its and set out by Mr. R. LI. B. Rathbone, under
internal fittings. whose supervision the work was carried out, and
The decorative value from whose drawings the illustrations are repro-
of these pieces of metal- duced.

proportions, these being contributed by one workman only—Mr. Alfred

built up within areas of Hughes,
simple geometric form,

taining its due M 'S"MSSMMM^\

relationship of proportion to the whole. '^V^M^^f^

by thoroughly workmanlike methods, to
make a determined stand against the
oppressive tyranny of the great god "Lac-
quer." Therefore, wherever a number of
separate pieces have had to be attached
together, the attachment has been effected
by whichever method seemed to give the
best result, structurally and decoratively,
so that in many cases the parts are seen
to be rivetted together, which would gene-
rally be impracticable if the work had
been planned to be lacquered.

The big square lantern with the " bull's-
eyes" (Fig. 1) hangs in the main stair-
case hall, and contains an eight light
" Stott" reflex burner—the light being
about level with the twelve glass " bull's-
eyes." These will be brilliantly illumi-
nated, while the white silk-gauze hangings,
stretched and kept in position by shot
bags attached to black cords, will also
be full of light and yet screen the eyes, ->r
.as one ascends the stairs, from the glare