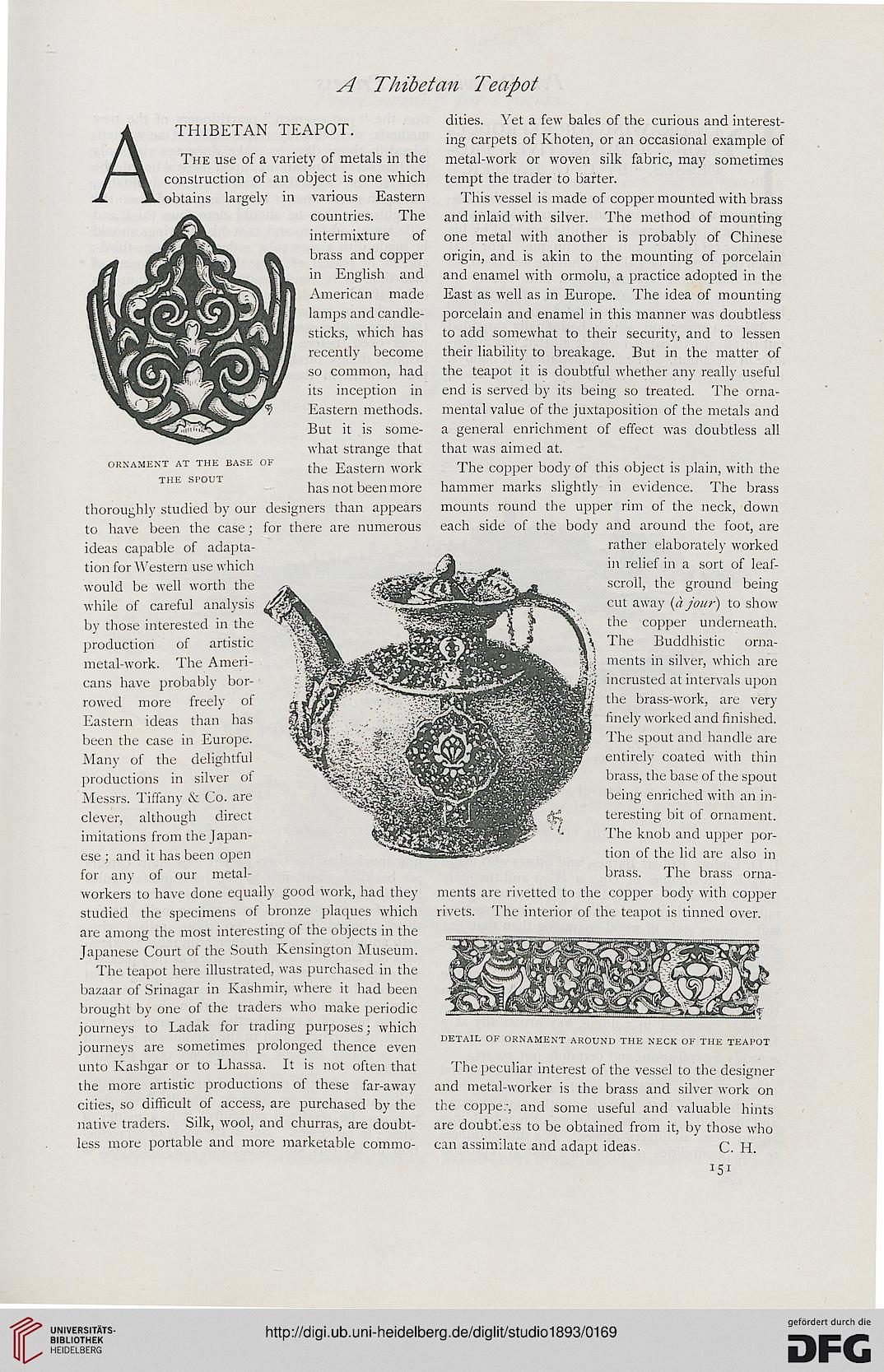 ____ dities. Yet a few bales of the curious and interest-

ing carpets of Khoten, or an occasional example of
The use of a variety of metals in the metal-work or woven silk fabric, may sometimes
construction of an object is one which tempt the trader to barter,
obtains largely in various Eastern This vessel is made of copper mounted with brass
countries. The and inlaid with silver. The method of mounting
intermixture of one metal with another is probably of Chinese
brass and copper origin, and is akin to the mounting of porcelain
in English and and enamel with ormolu, a practice adopted in the
American made East as well as in Europe. The idea of mounting
lamps and candle- porcelain and enamel in this manner was doubtless
sticks, which has to add somewhat to their security, and to lessen
recently become their liability to breakage. But in the matter of
so common, had the teapot it is doubtful whether any really useful
its inception in end is served by its being so treated. The orna-
Eastern methods, mental value of the juxtaposition of the metals and
But it is some- a general enrichment of effect was doubtless all
what strange that that was aimed at.
ornament at the base of {he eastern yfojfc The copper body of this object is plain, with the

has not been more hammer marks slightly in evidence. The brass
thoroughly studied by our designers than appears mounts round the upper rim of the neck, down
to have been the case; for there are numerous each side of the body and around the foot, are
ideas capable of adapta- rather elaborately worked

b\ thos. interested in the f \. the coPPer underneath,

ese ; and it has been open tion of the lid are also in

for any of our metal- brass. The brass orna-

workers to have done equally good work, had they ments are rivetted to the copper body with copper
studied the specimens of bronze plaques which rivets. The interior of the teapot is tinned over,
are among the most interesting of the objects in the
Japanese Court of the South Kensington Museum.

The teapot here illustrated, was purchased in the
bazaar of Srinagar in Kashmir, where it had been
brought by one of the traders who make periodic
journeys to Ladak for trading purposes; which
journeys are sometimes prolonged thence even
unto Kashgar or to Lhassa. It is not often that The peculiar interest of the vessel to the designer
the more artistic productions of these far-away and metal-worker is the brass and silver work on
cities, so difficult of access, are purchased by the the copper, and some useful and valuable hints
native traders. Silk, wool, and churras, are doubt- are doubtless to be obtained from it, by those who
less more portable and more marketable commo- can assimilate and adapt ideas. C. H.

detail ok ornament around the neck ok the teapot