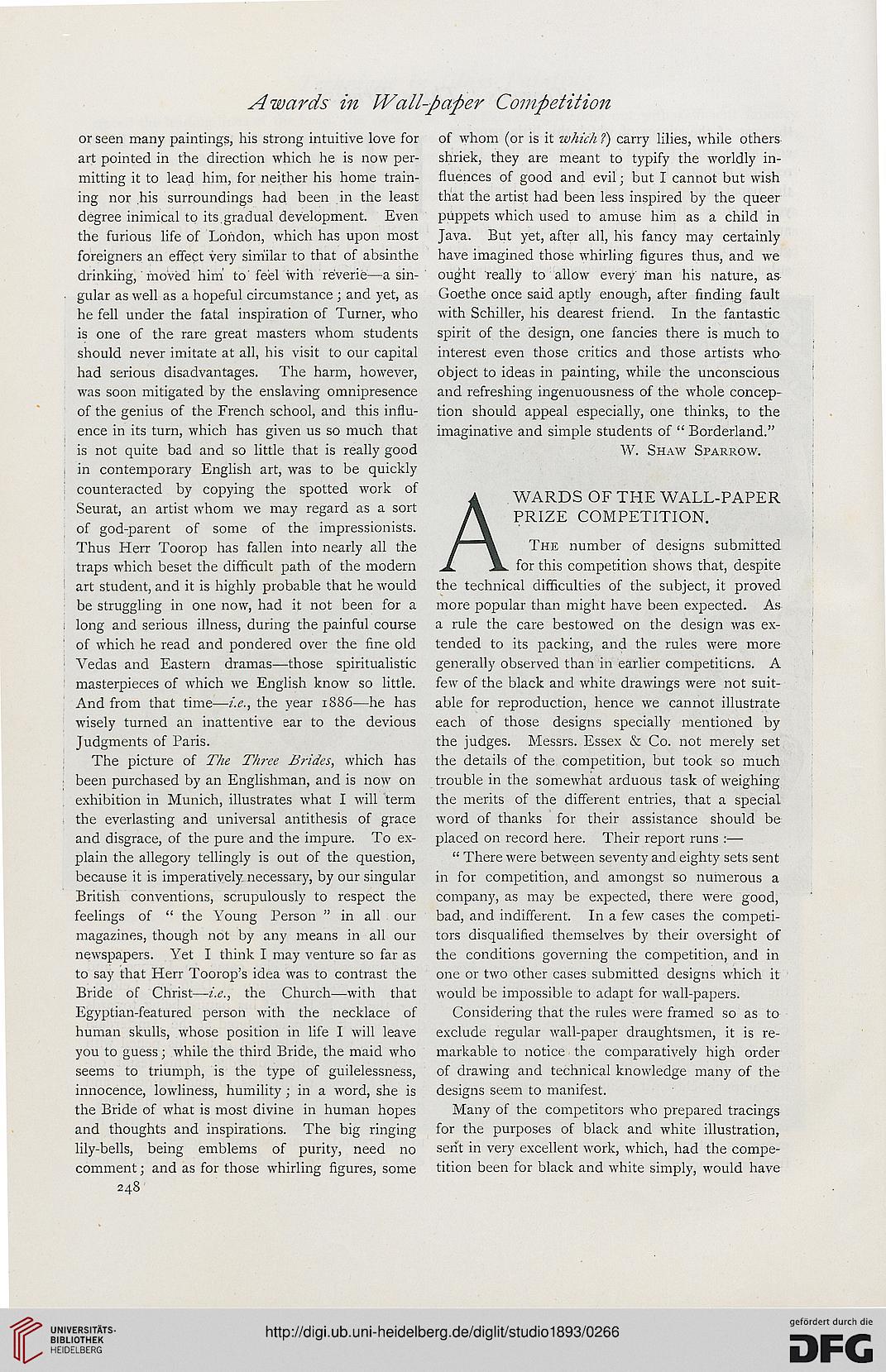 or seen many paintings, his strong intuitive love for
art pointed in the direction which he is now per-
mitting it to lead him, for neither his home train-
ing nor his surroundings had been in the least
degree inimical to its,gradual development. Even
the furious life of London, which has upon most
foreigners an effect very similar to that of absinthe
drinking, moved him to' feel with reverie—a sin-
gular as well as a hopeful circumstance ; and yet, as
he fell under the fatal inspiration of Turner, who
is one of the rare great masters whom students
should never imitate at all, his visit to our capital
had serious disadvantages. The harm, however,
was soon mitigated by the enslaving omnipresence
of the genius of the French school, and this influ-
ence in its turn, which has given us so much that
is not quite bad and so little that is really good
in contemporary English art, was to be quickly
counteracted by copying the spotted work of
Seurat, an artist whom we may regard as a sort
of god-parent of some of the impressionists.
Thus Herr Toorop has fallen into nearly all the
traps which beset the difficult path of the modern
art student, and it is highly probable that he would
be struggling in one now, had it not been for a
long and serious illness, during the painful course
of which he read and pondered over the fine old
Vedas and Eastern dramas—those spiritualistic
masterpieces of which we English know so little.
And from that time—i.e., the year 1886—he has
wisely turned an inattentive ear to the devious
Judgments of Paris.

The picture of The Three Brides, which has
been purchased by an Englishman, and is now on
exhibition in Munich, illustrates what I will term
the everlasting and universal antithesis of grace
and disgrace, of the pure and the impure. To ex-
plain the allegory tellingly is out of the question,
because it is imperatively necessary, by our singular
British conventions, scrupulously to respect the
feelings of " the Young Person " in all our
magazines, though not by any means in all our
newspapers. Yet I think I may venture so far as
to say that Herr Toorop's idea was to contrast the
Bride of Christ—i.e., the Church—with that
Egyptian-featured person with the necklace of
human skulls, whose position in life I will leave
you to guess; while the third Bride, the maid who
seems to triumph, is the type of guilelessness,
innocence, lowliness, humility; in a word, she is
the Bride of what is most divine in human hopes
and thoughts and inspirations. The big ringing
lily-bells, being emblems of purity, need no
comment; and as for those whirling figures, some
248

of whom (or is it which T) carry lilies, while others
shriek, they are meant to typify the worldly in-
fluences of good and evil; but I cannot but wish
that the artist had been less inspired by the queer
puppets which used to amuse him as a child in
Java. But yet, after all, his fancy may certainly
have imagined those whirling figures thus, and we
ought really to allow every man his nature, as
Goethe once said aptly enough, after finding fault
with Schiller, his dearest friend. In the fantastic
spirit of the design, one fancies there is much to
interest even those critics and those artists who
object to ideas in painting, while the unconscious
and refreshing ingenuousness of the whole concep-
tion should appeal especially, one thinks, to the
imaginative and simple students of " Borderland."

AWARDS OF THE WALL-PAPER
PRIZE COMPETITION.
The number of designs submitted
for this competition shows that, despite
the technical difficulties of the subject, it proved
more jDopular than might have been expected. As
a rule the care bestowed on the design was ex-
tended to its packing, and the rules were more
generally observed than in earlier competitions. A
few of the black and white drawings were not suit-
able for reproduction, hence we cannot illustrate
each of those designs specially mentioned by
the judges. Messrs. Essex & Co. not merely set
the details of the competition, but took so much
trouble in the somewhat arduous task of weighing
the merits of the different entries, that a special
word of thanks for their assistance should be
placed on record here. Their report runs :—■

" There were between seventy and eighty sets sent
in for competition, and amongst so numerous a
company, as may be expected, there were good,
bad, and indifferent. In a few cases the competi-
tors disqualified themselves by their oversight of
the conditions governing the competition, and in
one or two other cases submitted designs which it
would be impossible to adapt for wall-papers.

Considering that the rules were framed so as to
exclude regular wall-paper draughtsmen, it is re-
markable to notice the comparatively high order
of drawing and technical knowledge many of the
designs seem to manifest.

Many of the competitors who prepared tracings
for the purposes of black and white illustration,
sent in very excellent work, which, had the compe-
tition been for black and white simply, would have