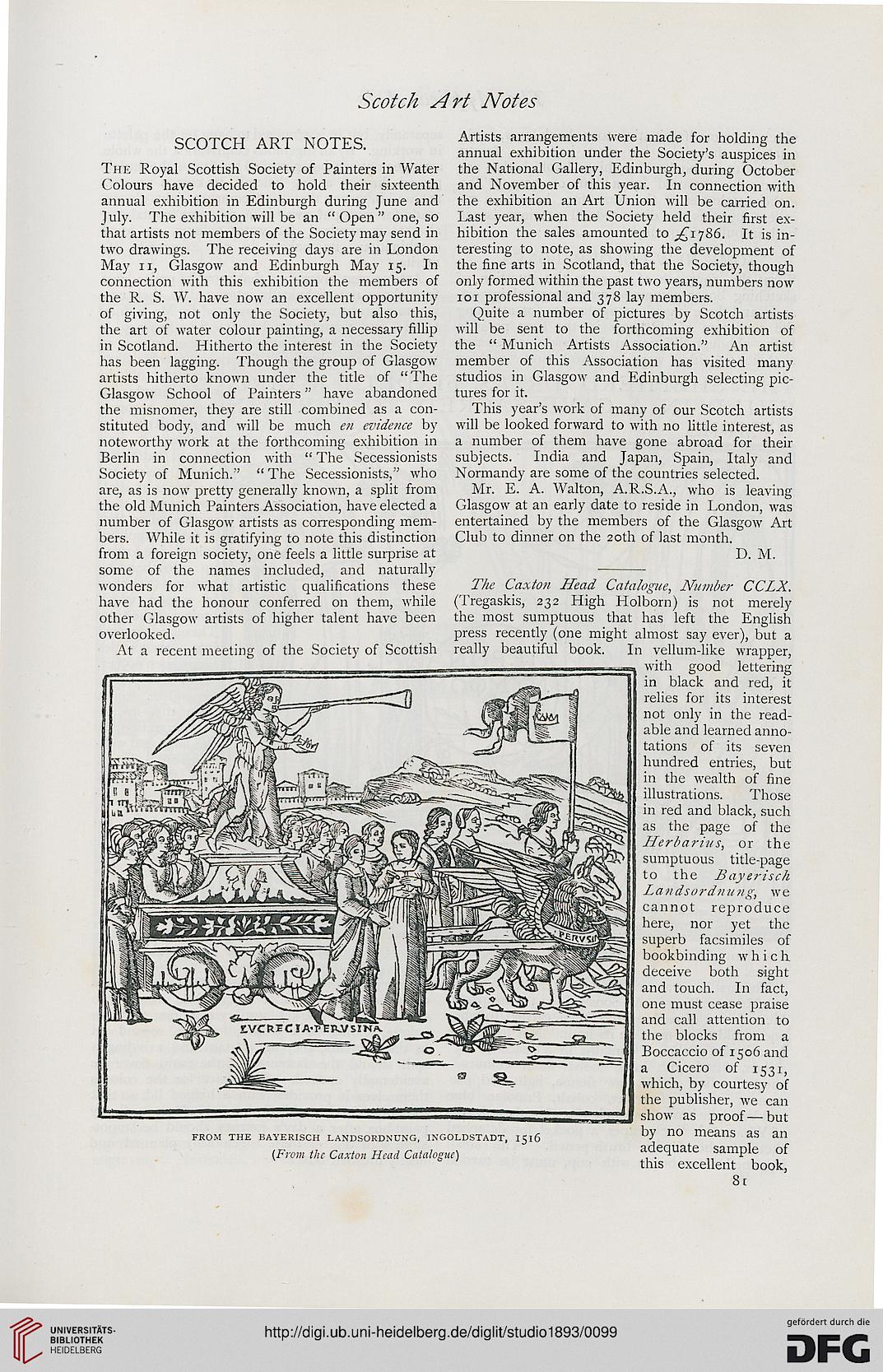 SCOTCH ART NOTES Artists arrangements were made for holding the

annual exhibition under the Society's auspices in
The Royal Scottish Society of Painters in Water the National Gallery, Edinburgh, during October
Colours have decided to hold their sixteenth and November of this year. In connection with
annual exhibition in Edinburgh during June and the exhibition an Art Union will be carried on.
July. The exhibition will be an "Open" one, so Last year, when the Society held their first ex-
that artists not members of the Society may send in hibition the sales amounted to ^1786. It is in-
two drawings. The receiving days are in London teresting to note, as showing the development of
May 11, Glasgow and Edinburgh May 15. In the fine arts in Scotland, that the Society, though
connection with this exhibition the members of only formed within the past two years, numbers now
the R. S. W. have now an excellent opportunity 101 professional and 378 lay members,
of giving, not only the Society, but also this, Quite a number of pictures by Scotch artists
the art of water colour painting, a necessary fillip will be sent to the forthcoming exhibition of
in Scotland. Hitherto the interest in the Society the " Munich Artists Association." An artist
has been lagging. Though the group of Glasgow member of this Association has visited many
artists hitherto known under the title of "The studios in Glasgow and Edinburgh selecting pic-
Glasgow School of Painters" have abandoned tures for it.

the misnomer, they are still combined as a con- This year's work of many of our Scotch artists
stituted body, and will be much en evidence by will be looked forward to with no little interest, as
noteworthy work at the forthcoming exhibition in a number of them have gone abroad for their
Berlin in connection with " The Secessionists subjects. India and Japan, Spain, Italy and
Society of Munich." " The Secessionists," who Normandy are some of the countries selected,
are, as is now pretty generally known, a split from Mr. E. A. Walton, A.R.S.A., who is leaving
the old Munich Painters Association, have elected a Glasgow at an early date to reside in London, was
number of Glasgow artists as corresponding mem- entertained by the members of the Glasgow Art
bers. While it is gratifying to note this distinction Club to dinner on the 20th of last month,
from a foreign society, one feels a little surprise at D. M.

some of the names included, and naturally -

wonders for what artistic qualifications these The Caxton Head Catalogue, Number CCLX.
have had the honour conferred on them, while (Tregaskis, 232 High Holborn) is not merely
other Glasgow artists of higher talent have been the most sumptuous that has left the English
overlooked. press recently (one might almost say ever), but a

At a recent meeting of the Society of Scottish really beautiful book. In vellum-like wrapper,

with good lettering
in black and red, it
relies for its interest
not only in the read-
able and learned anno-
tations of its seven
hundred entries, but
in the wealth of fine
illustrations. Those
in red and black, such
as the page of the
Herbaria s, or the
sumptuous title-page
to the Bayerisch
Landsordnung, we
cannot reproduce
here, nor yet the
superb facsimiles of
bookbinding w h i c h
deceive both sight
and touch. In fact,
one must cease praise
and call attention to
the blocks from a
Boccaccio of 1506 and
a Cicero of 1531,
which, by courtesy of
the publisher, we can
show as proof—but

{From the Caxton Head Catalogue) adequate sample of