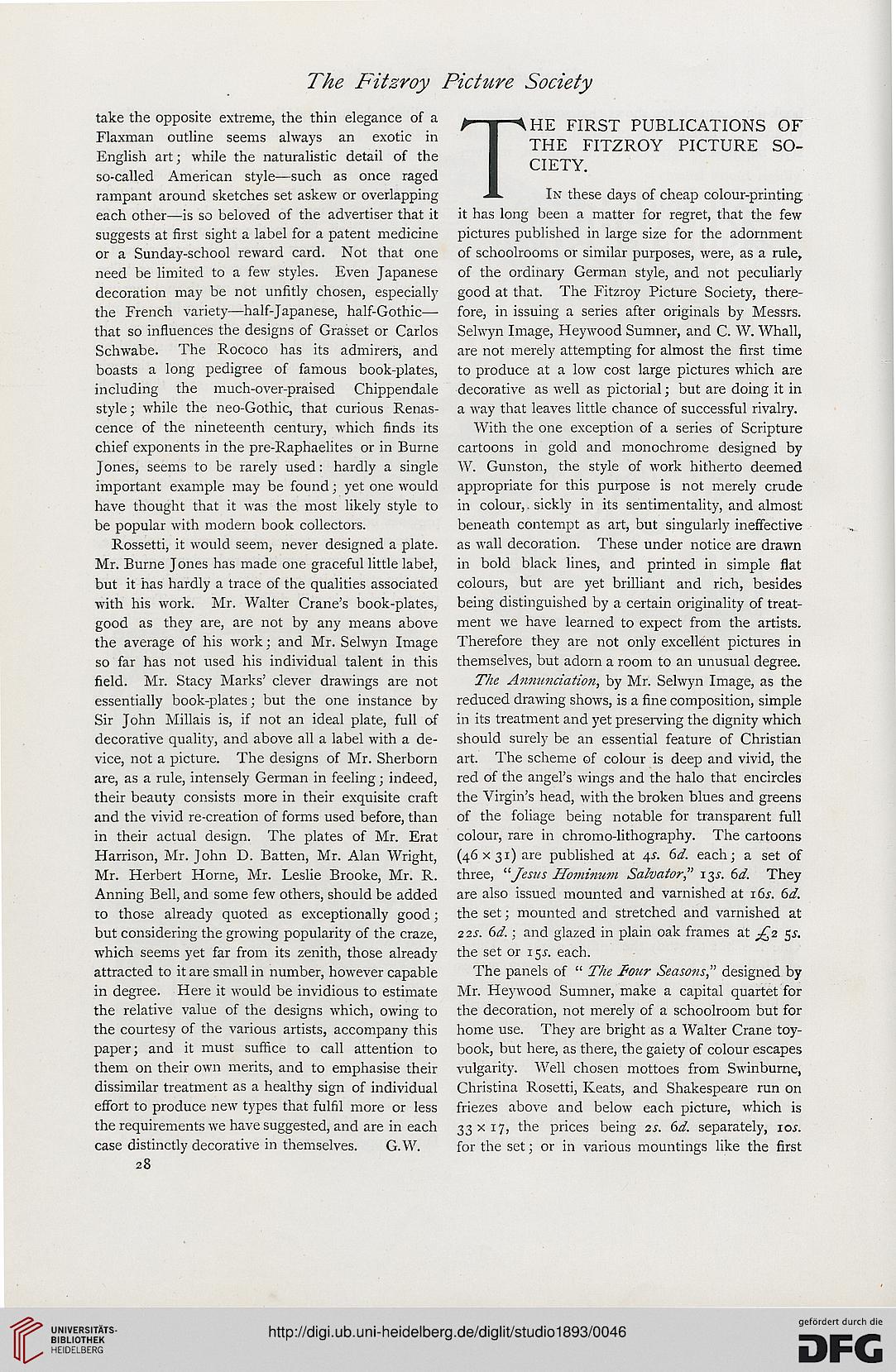 take the opposite extreme, the thin elegance of a
Flaxman outline seems always an exotic in
English art; while the naturalistic detail of the
so-called American style—such as once raged
rampant around sketches set askew or overlapping
each other—is so beloved of the advertiser that it
suggests at first sight a label for a patent medicine
or a Sunday-school reward card. Not that one
need be limited to a few styles. Even Japanese
decoration may be not unfitly chosen, especially
the French variety—half-Japanese, half-Gothic—■
that so influences the designs of Grasset or Carlos
Schwabe. The Rococo has its admirers, and
boasts a long pedigree of famous book-plates,
including the much-over-praised Chippendale
style; while the neo-Gothic, that curious Renas-
cence of the nineteenth century, which finds its
chief exponents in the pre-Raphaelites or in Burne
Jones, seems to be rarely used: hardly a single
important example may be found; yet one would
have thought that it was the most likely style to
be popular with modern book collectors.

Rossetti, it would seem, never designed a plate.
Mr. Burne Jones has made one graceful little label,
but it has hardly a trace of the qualities associated
with his work. Mr. Walter Crane's book-plates,
good as they are, are not by any means above
the average of his work; and Mr. Selwyn Image
so far has not used his individual talent in this
field. Mr. Stacy Marks' clever drawings are not
essentially book-plates; but the one instance by
Sir John Millais is, if not an ideal plate, full of
decorative quality, and above all a label with a de-
vice, not a picture. The designs of Mr. Sherborn
are, as a rule, intensely German in feeling; indeed,
their beauty consists more in their exquisite craft
and the vivid re-creation of forms used before, than
in their actual design. The plates of Mr. Erat
Harrison, Mr. John D. Batten, Mr. Alan Wright,
Mr. Herbert Home, Mr. Leslie Brooke, Mr. R.
Anning Bell, and some few others, should be added
to those already quoted as exceptionally good;
but considering the growing popularity of the craze,
which seems yet far from its zenith, those already
attracted to it are small in number, however capable
in degree. Here it would be invidious to estimate
the relative value of the designs which, owing to
the courtesy of the various artists, accompany this
paper; and it must suffice to call attention to
them on their own merits, and to emphasise their
dissimilar treatment as a healthy sign of individual
effort to produce new types that fulfil more or less
the requirements we have suggested, and are in each
case distinctly decorative in themselves. G.W.
28

THE FIRST PUBLICATIONS OF
THE FITZROY PICTURE SO-
CIETY.
In these days of cheap colour-printing
it has long been a matter for regret, that the few
pictures published in large size for the adornment
of schoolrooms or similar purposes, were, as a rule,
of the ordinary German style, and not peculiarly
good at that. The Fitzroy Picture Society, there-
fore, in issuing a series after originals by Messrs.
Selwyn Image, Heywood Sumner, and C. W. Whall,
are not merely attempting for almost the first time
to produce at a low cost large pictures which are
decorative as well as pictorial; but are doing it in
a way that leaves little chance of successful rivalry.

With the one exception of a series of Scripture
cartoons in gold and monochrome designed by
W. Gunston, the style of work hitherto deemed
appropriate for this purpose is not merely crude
in colour,. sickly in its sentimentality, and almost
beneath contempt as art, but singularly ineffective
as wall decoration. These under notice are drawn
in bold black lines, and printed in simple flat
colours, but are yet brilliant and rich, besides
being distinguished by a certain originality of treat-
ment we have learned to expect from the artists.
Therefore they are not only excellent pictures in
themselves, but adorn a room to an unusual degree.

The Anmmciation, by Mr. Selwyn Image, as the
reduced drawing shows, is a fine composition, simple
in its treatment and yet preserving the dignity which
should surely be an essential feature of Christian
art. The scheme of colour is deep and vivid, the
red of the angel's wings and the halo that encircles
the Virgin's head, with the broken blues and greens
of the foliage being notable for transparent full
colour, rare in chromo-lithography. The cartoons
(46x31) are published at 4*. 6d. each; a set of
three, "Jesus Hominum Salvator" 135. 6d. They
are also issued mounted and varnished at 165. 6d.
the set; mounted and stretched and varnished at
22s. 6d.; and glazed in plain oak frames at £2 55.
the set or 15^. each.

The panels of " The four Seasons," designed by
Mr. Heywood Sumner, make a capital quartet for
the decoration, not merely of a schoolroom but for
home use. They are bright as a Walter Crane toy-
book, but here, as there, the gaiety of colour escapes
vulgarity. Well chosen mottoes from Swinburne,
Christina Rosetti, Keats, and Shakespeare run on
friezes above and below each picture, which is
33x17, the prices being 2s. 6d. separately, 10s.
for the set; or in various mountings like the first