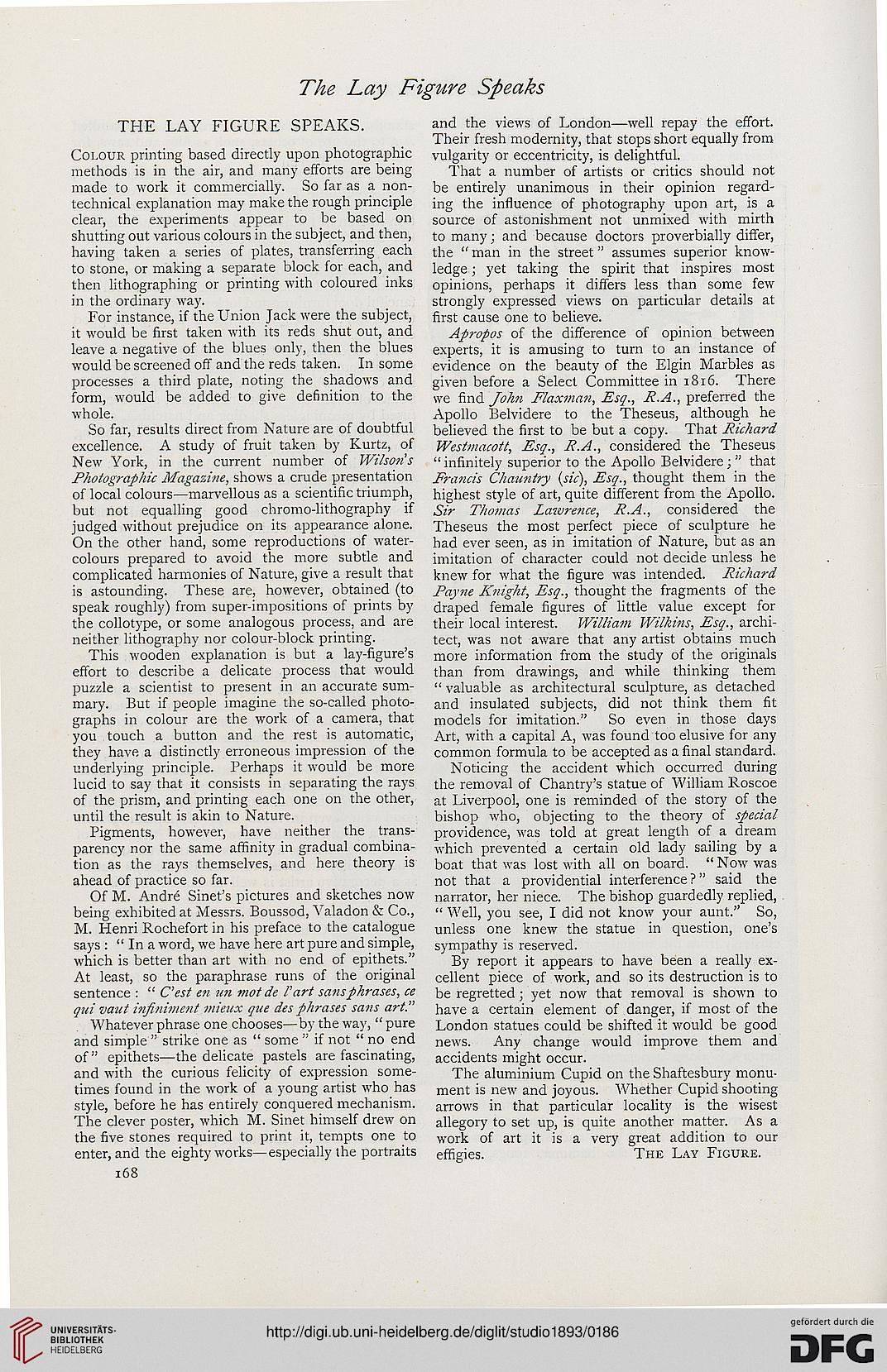 Colour printing based directly upon photographic
methods is in the air, and many efforts are being
made to work it commercially. So far as a non-
technical explanation may make the rough principle
clear, the experiments appear to be based on
shutting out various colours in the subject, and then,
having taken a series of plates, transferring each
to stone, or making a separate block for each, and
then lithographing or printing with coloured inks
in the ordinary way.

For instance, if the Union Jack were the subject,
it would be first taken with its reds shut out, and
leave a negative of the blues only, then the blues
would be screened off and the reds taken. In some
processes a third plate, noting the shadows and
form, would be added to give definition to the
whole.

So far, results direct from Nature are of doubtful
excellence. A study of fruit taken by Kurtz, of
New York, in the current number of Wilson's
Photographic Magazine, shows a crude presentation
of local colours—marvellous as a scientific triumph,
but not equalling good chromo-lithography if
judged without prejudice on its appearance alone.
On the other hand, some reproductions of water-
colours prepared to avoid the more subtle and
complicated harmonies of Nature, give a result that
is astounding. These are, however, obtained (to
speak roughly) from super-impositions of prints by
the collotype, or some analogous process, and are
neither lithography nor colour-block printing.

This wooden explanation is but a lay-figure's
effort to describe a delicate process that would
puzzle a scientist to present in an accurate sum-
mary. But if people imagine the so-called photo-
graphs in colour are the work of a camera, that
you touch a button and the rest is automatic,
they have a distinctly erroneous impression of the
underlying principle. Perhaps it would be more
lucid to say that it consists in separating the rays
of the prism, and printing each one on the other,
until the result is akin to Nature.

Pigments, however, have neither the trans-
parency nor the same affinity in gradual combina-
tion as the rays themselves, and here theory is
ahead of practice so far.

Of M. Andre Sinet's pictures and sketches now
being exhibited at Messrs. Boussod, Valadon & Co.,
M. Henri Rochefort in his preface to the catalogue
says : " In a word, we have here art pure and simple,
which is better than art with no end of epithets."
At least, so the paraphrase runs of the original
sentence : " C'est en un mot de Part sans phrases, ce
qui vaut infiniment mieux que desphrases sans art."

Whatever phrase one chooses—by the way, " pure
and simple " strike one as " some " if not " no end
of " epithets—the delicate pastels are fascinating,
and with the curious felicity of expression some-
times found in the work of a young artist who has
style, before he has entirely conquered mechanism.
The clever poster, which M. Sinet himself drew on
the five stones required to print it, tempts one to
enter, and the eighty works—especially the portraits
168

and the views of London—well repay the effort.
Their fresh modernity, that stops short equally from
vulgarity or eccentricity, is delightful.

That a number of artists or critics should not
be entirely unanimous in their opinion regard-
ing the influence of photography upon art, is a
source of astonishment not unmixed with mirth
to many; and because doctors proverbially differ,
the "man in the street" assumes superior know-
ledge ; yet taking the spirit that inspires most
opinions, perhaps it differs less than some few
strongly expressed views on particular details at
first cause one to believe.

Apropos of the difference of opinion between
experts, it is amusing to turn to an instance of
evidence on the beauty of the Elgin Marbles as
given before a Select Committee in 1816. There
we find John Flaxman, Esq., R.A., preferred the
Apollo Belvidere to the Theseus, although he
believed the first to be but a copy. That Richard
Westmacott, Esq., R.A., considered the Theseus
" infinitely superior to the Apollo Belvidere ; " that
Francis Chauntry (sic), Esq., thought them in the
highest style of art, quite different from the Apollo.
Sir Thomas Laivrence, R.A., considered the
Theseus the most perfect piece of sculpture he
had ever seen, as in imitation of Nature, but as an
imitation of character could not decide unless he
knew for what the figure was intended. Richard
Payne Knight, Esq., thought the fragments of the
draped female figures of little value except for
their local interest. William Wilkins, Esq., archi-
tect, was not aware that any artist obtains much
more information from the study of the originals
than from drawings, and while thinking them
" valuable as architectural sculpture, as detached
and insulated subjects, did not think them fit
models for imitation." So even in those days
Art, with a capital A, was found too elusive for any
common formula to be accepted as a final standard.

Noticing the accident which occurred during
the removal of Chantry's statue of William Roscoe
at Liverpool, one is reminded of the story of the
bishop who, objecting to the theory of special
providence, was told at great length of a dream
which prevented a certain old lady sailing by a
boat that was lost with all on board. " Now was
not that a providential interference?" said the
narrator, her niece. The bishop guardedly replied,
" Well, you see, I did not know your aunt." So,
unless one knew the statue in question, one's
sympathy is reserved.

By report it appears to have been a really ex-
cellent piece of work, and so its destruction is to
be regretted; yet now that removal is shown to
have a certain element of danger, if most of the
London statues could be shifted it would be good
news. Any change would improve them and
accidents might occur.

The aluminium Cupid on the Shaftesbury monu-
ment is new and joyous. Whether Cupid shooting
arrows in that particular locality is the wisest
allegory to set up, is quite another matter. As a
work of art it is a very great addition to our
effigies. The Lay Figure.