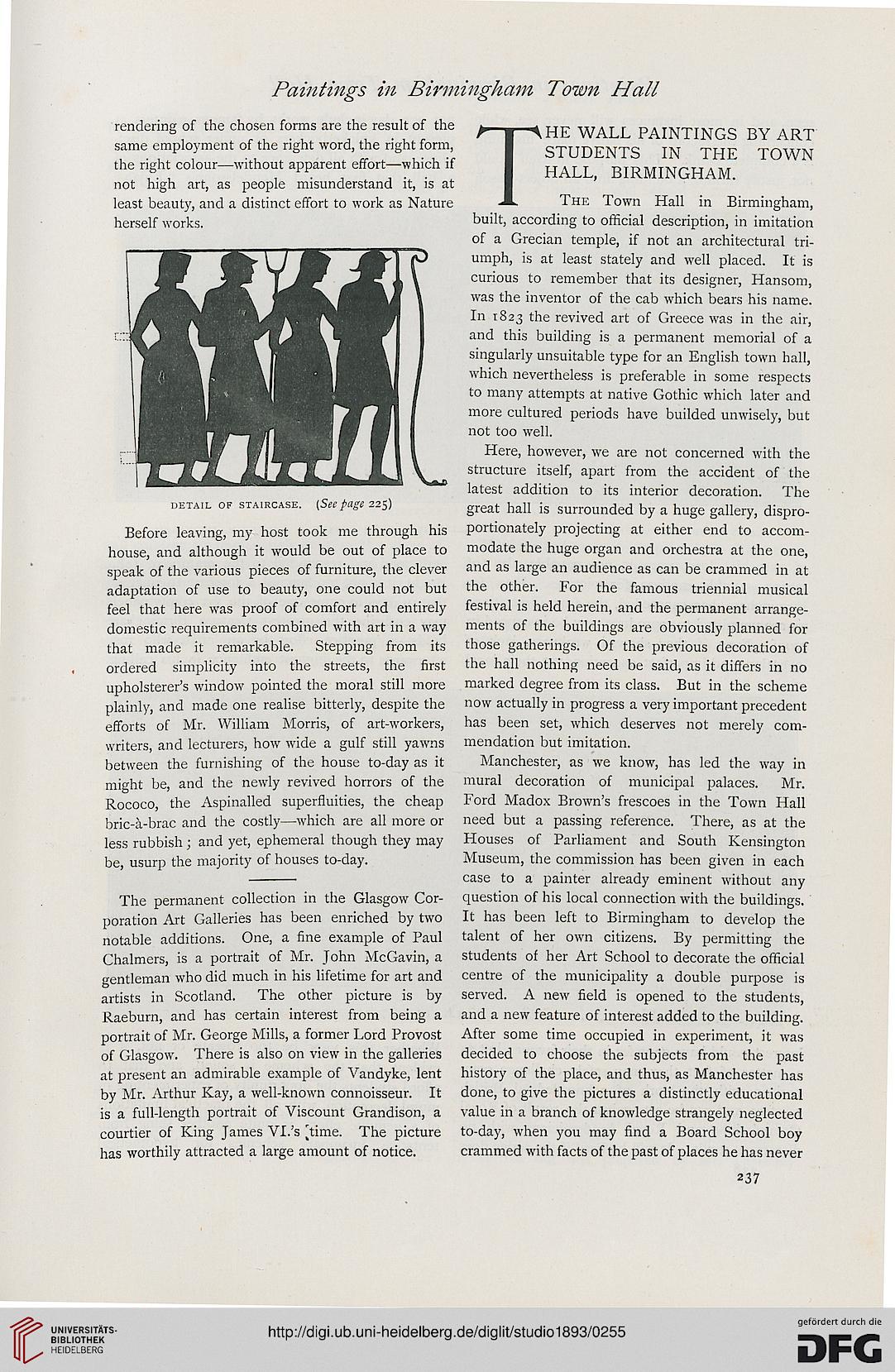 rendering of the chosen forms are the result of the P W \ HE WALL PAINTINGS BY ART
same employment of the right word, the right form, STUDENTS IN THE TOWN

TL
HALL BIRMINGHAM
The Town Hall in Birmingham,
herself works. buut> according to official description, in imitation

of a Grecian temple, if not an architectural tri-
umph, is at least stately and well placed. It is
curious to remember that its designer, Hansom,
was the inventor of the cab which bears his name.
In 1823 the revived art of Greece was in the air,
and this building is a permanent memorial of a
singularly unsuitable type for an English town hall,
which nevertheless is preferable in some respects
to many attempts at native Gothic which later and
more cultured periods have builded unwisely, but
not too well.

Here, however, we are not concerned with the
structure itself, apart from the accident of the

latest addition to its interior decoration. The
detail of staircase. (Seepage 225) great hall js surrounded by a huge galleryj dispr0.

Before leaving, my host took me through his portionately projecting at either end to accom-
house, and although it would be out of place to modate the huge organ and orchestra at the one,
speak of the various pieces of furniture, the clever and as large an audience as can be crammed in at
adaptation of use to beauty, one could not but the other. For the famous triennial musical
feel that here was proof of comfort and entirely festival is held herein, and the permanent arrange-
domestic requirements combined with art in a way ments of the buildings are obviously planned for
that made it remarkable. Stepping from its those gatherings. Of the previous decoration of
ordered simplicity into the streets, the first the hall nothing need be said, as it differs in no
upholsterer's window pointed the moral still more marked degree from its class. But in the scheme
plainly, and made one realise bitterly, despite the now actually in progress a very important precedent
efforts of Mr. William Morris, of art-workers, has been set, which deserves not merely corn-
writers, and lecturers, how wide a gulf still yawns mendation but imitation.

between the furnishing of the house to-day as it Manchester, as we know, has led the way in

might be, and the newly revived horrors of the mural decoration of municipal palaces. Mr.

bric-a-brac and the costly—which are all more or need but a passing reference. There, as at the

less rubbish; and yet, ephemeral though they may Houses of Parliament and South Kensington

be, usurp the majority of houses to-day. Museum, the commission has been given in each

case to a painter already eminent without any

The permanent collection in the Glasgow Cor- question of his local connection with the buildings,

notable additions. One, a fine example of Paul talent of her own citizens. By permitting the

Chalmers, is a portrait of Mr. John McGavin, a students of her Art School to decorate the official

artists in Scotland. The other picture is by served. A new field is opened to the students,

Raeburn, and has certain interest from being a and a new feature of interest added to the building,

portrait of Mr. George Mills, a former Lord Provost After some time occupied in experiment, it was

of Glasgow. There is also on view in the galleries decided to choose the subjects from the past

at present an admirable example of Vandyke, lent history of the place, and thus, as Manchester has

by Mr. Arthur Kay, a well-known connoisseur. It done, to give the pictures a distinctly educational

is a full-length portrait of Viscount Grandison, a value in a branch of knowledge strangely neglected

courtier of King James VI.'s [time. The picture to-day, when you may find a Board School boy

has worthily attracted a large amount of notice. crammed with facts of the past of places he has never