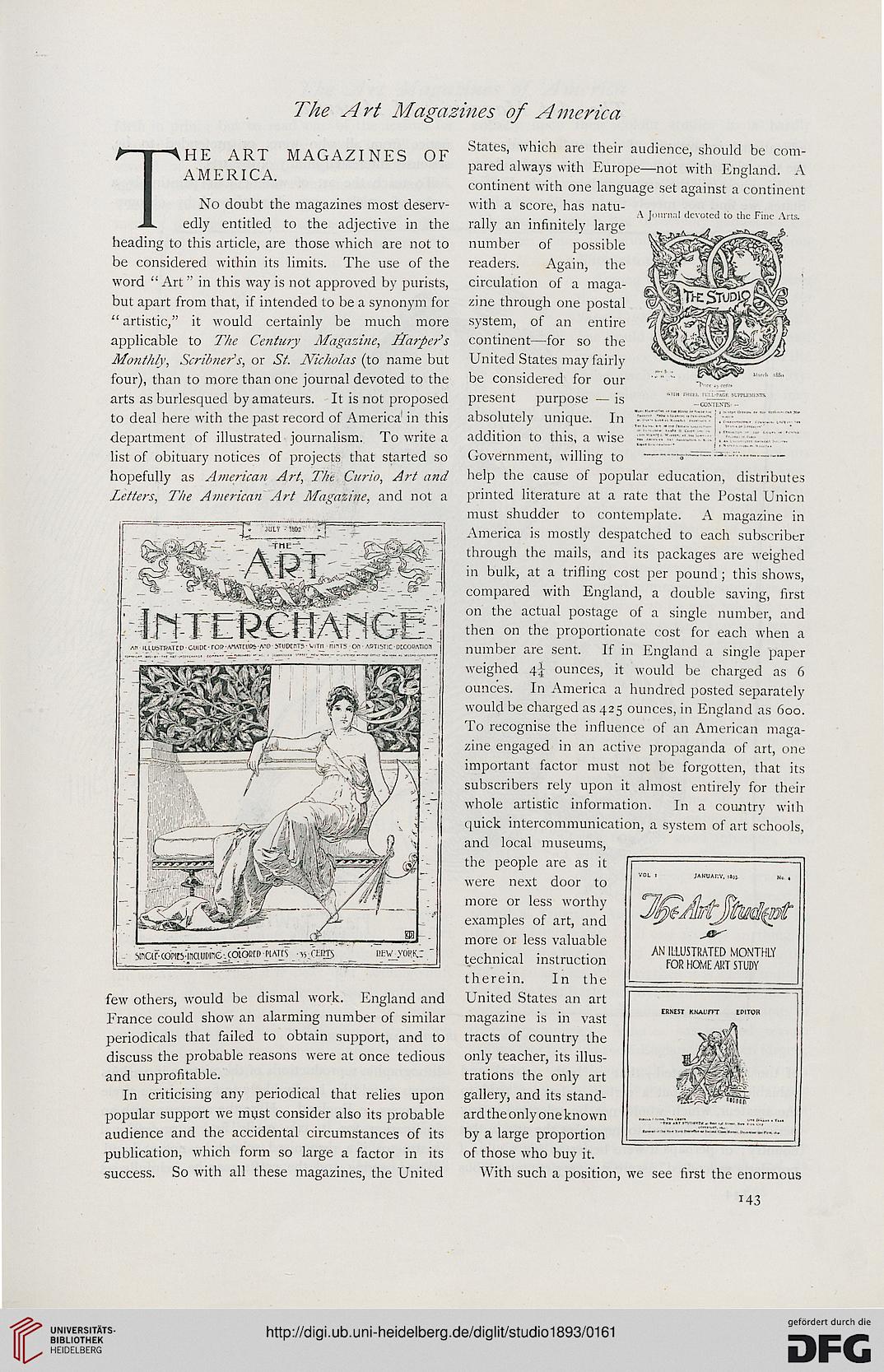 THE ART MAGAZINES OF Statef' ,which are their audien^. should be com-
AM ERICA pared always with Europe—not with England. A

continent with one language set against a continent
No doubt the magazines most deserv- with a score, has natu-
...... . . . A Journal devoted to the Fine Ant

edly entitled to the adjective in the rally an infinitely large

heading to this article, are those which are not to number of possible
be considered within its limits. The use of the readers. Again, the
word " Art " in this way is not approved by purists, circulation of a maga-
but apart from that, if intended to be a synonym for zine through one postal
"artistic," it would certainly be much more system, of an entire
applicable to The Century Magazine, Sarpcr's continent—for so the
Monthly, Scribner's, or St. Nicholas (to name but United States may fairly
four), than to more than one journal devoted to the be considered for our
arts as burlesqued by amateurs. It is not proposed present purpose — is
to deal here with the past record of America1 in this absolutely unique. In rs^^HrSI lrlZZZ~ZZZ"lZZZ
department of illustrated journalism. To write a addition to this, a wise £,• ; .

list of obituary notices of projects that started so Government, willing to ^-==r.nr.------

hopefully as American Art, The Curio, Art and help the cause of popular education, distributes
Letters, The American Art Magazine, and not a printed literature at a rate that the Postal Union

must shudder to contemplate. A magazine in
America is mostly despatched to each subscriber
through the mails, and its packages are weighed
in bulk, at a trifling cost per pound ; this shows,
compared with England, a double saving, first
on the actual postage of a single number, and
then on the proportionate cost for each when a
number are sent. If in England a single paper
weighed ounces, it would be charged as 6
ounces. In America a hundred posted separately
would be charged as 425 ounces, in England as 600.
To recognise the influence of an American maga-
zine engaged in an active propaganda of art, one
important factor must not be forgotten, that its
subscribers rely upon it almost entirely for their
whole artistic information. In a country with
quick intercommunication, a system of art schools,
and local museums,

the people are as it
were next door to
more or less worthy
examples of art, and
more or less valuable
technical instruction
therein. In the

few others, would be dismal work. England and United States an art
Erance could show an alarming number of similar magazine is in vast
periodicals that failed to obtain support, and to tracts of country the
discuss the probable reasons were at once tedious only teacher, its illus-
and unprofitable. trations the only art

In criticising any periodical that relies upon gallery, and its stand-
popular support we must consider also its probable ard the only one known
audience and the accidental circumstances of its by a large proportion
publication, which form so large a factor in its of those who buy it.

success. So with all these magazines, the United With such a position, we see first the enormous