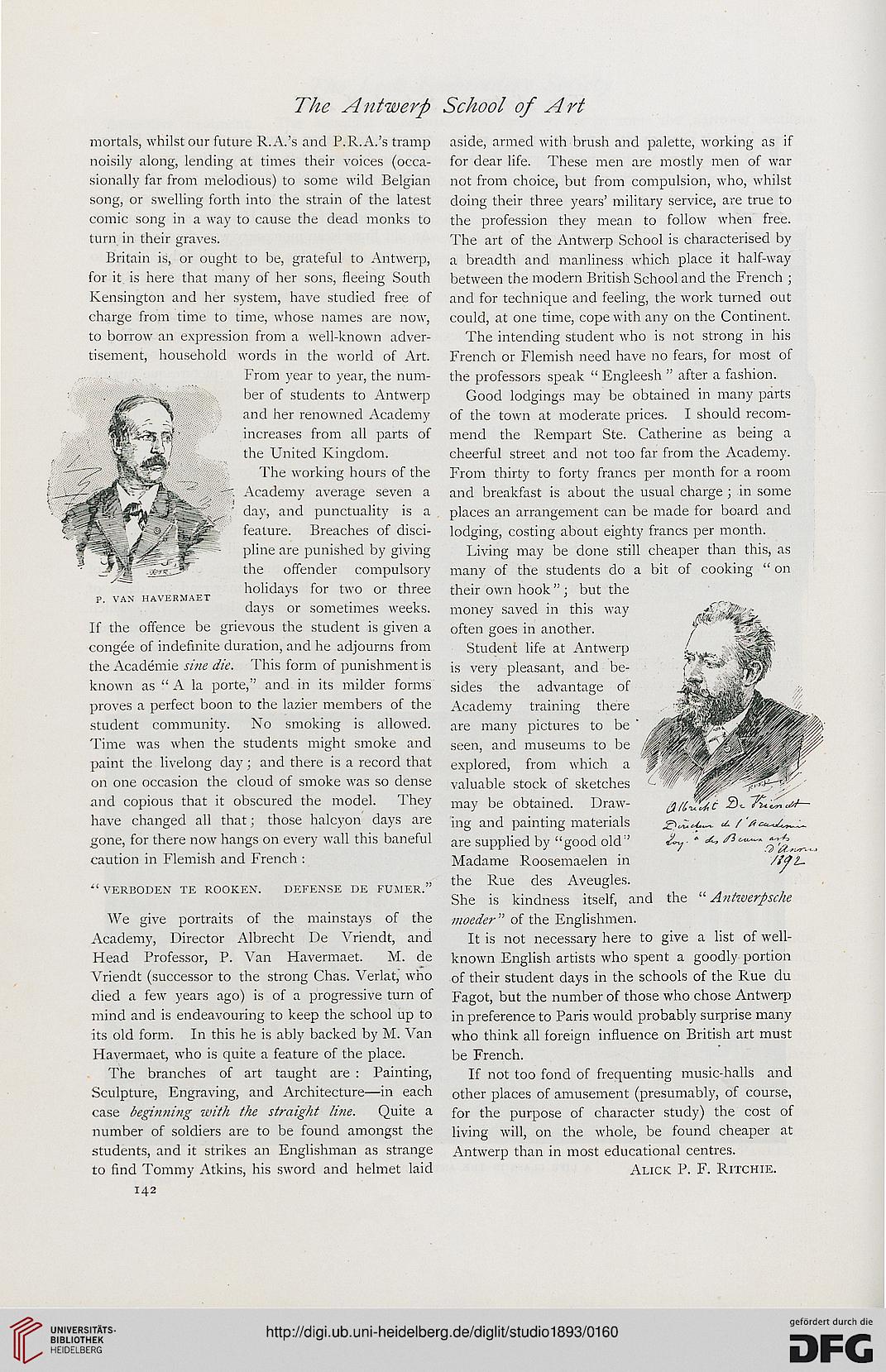 Information about OCR text
The Antwerp School of Art

mortals, whilst our future R.A.'s and P.R.A.'s tramp aside, armed with brush and palette, working as if

noisily along, lending at times their voices (occa- for dear life. These men are mostly men of war

sionally far from melodious) to some wild Belgian not from choice, but from compulsion, who, whilst

song, or swelling forth into the strain of the latest doing their three years' military service, are true to

comic song in a way to cause the dead monks to the profession they mean to follow when free,

turn in their graves. The art of the Antwerp School is characterised by

Britain is, or ought to be, grateful to Antwerp, a breadth and manliness which place it half-way

for it is here that many of her sons, fleeing South between the modern British School and the French ;

Kensington and her system, have studied free of and for technique and feeling, the work turned out

charge from time to time, whose names are now, could, at one time, cope with any on the Continent,

tisement, household words in the world of Art. French or Flemish need have no fears, for most of

From year to year, the hum- the professors speak " Engleesh " after a fashion,

and her renowned Academy of the town at moderate prices. I should recom-

increases from all parts of mend the Rempart Ste. Catherine as being a

the United Kingdom. cheerful street and not too far from the Academy.

Academy average seven a and breakfast is about the usual charge ; in some

day, and punctuality is a places an arrangement can be made for board and

pline are punished by giving Living may be done still cheaper than this, as

~~i „ holidays for two or three their own hook" : but the

days or sometimes weeks, money saved in this way
If the offence be grievous the student is given a often goes in another,
congee of indefinite duration, and he adjourns from Student life at Antwerp
the Academie sine die. This form of punishment is js very pleasant, and be-
known as " A la porte," and in its milder forms sides the advantage of
proves a perfect boon to the lazier members of the Academy training there
student community. No smoking is allowed, are many pictures to be
Time was when the students might smoke and seen, and museums to be
paint the livelong day ; and there is a record that explored, from which a
on one occasion the cloud of smoke was so dense valuable stock of sketches
and copious that it obscured the model. They may be obtained. Draw-
have changed all that; those halcyon days are ;ng an(j painting materials
gone, for there now hangs on every wall this baneful are supplied by "good old"
caution in Flemish and French : Madame Roosemaelen in

She is kindness itself, and the " Antwerpsche

We give portraits of the mainstays of the nweder" of the Englishmen.

Academy, Director Albrecht De Vriendt, and It is not necessary here to give a list of well-

Vriendt (successor to the strong Chas. Verlat,' who 0f their student days in the schools of the Rue du

died a few years ago) is of a progressive turn of Fagot, but the number of those who chose Antwerp

its old form. In this he is ably backed by M. Van who think all foreign influence on British art must

Havermaet, who is quite a feature of the place. be French.

The branches of art taught are : Painting, if not too fond of frequenting music-halls and

Sculpture, Engraving, and Architecture—in each other places of amusement (presumably, of course,

case beginning with the straight line. Quite a for the purpose of character study) the cost of

number of soldiers are to be found amongst the living will, on the whole, be found cheaper at

students, and it strikes an Englishman as strange Antwerp than in most educational centres,