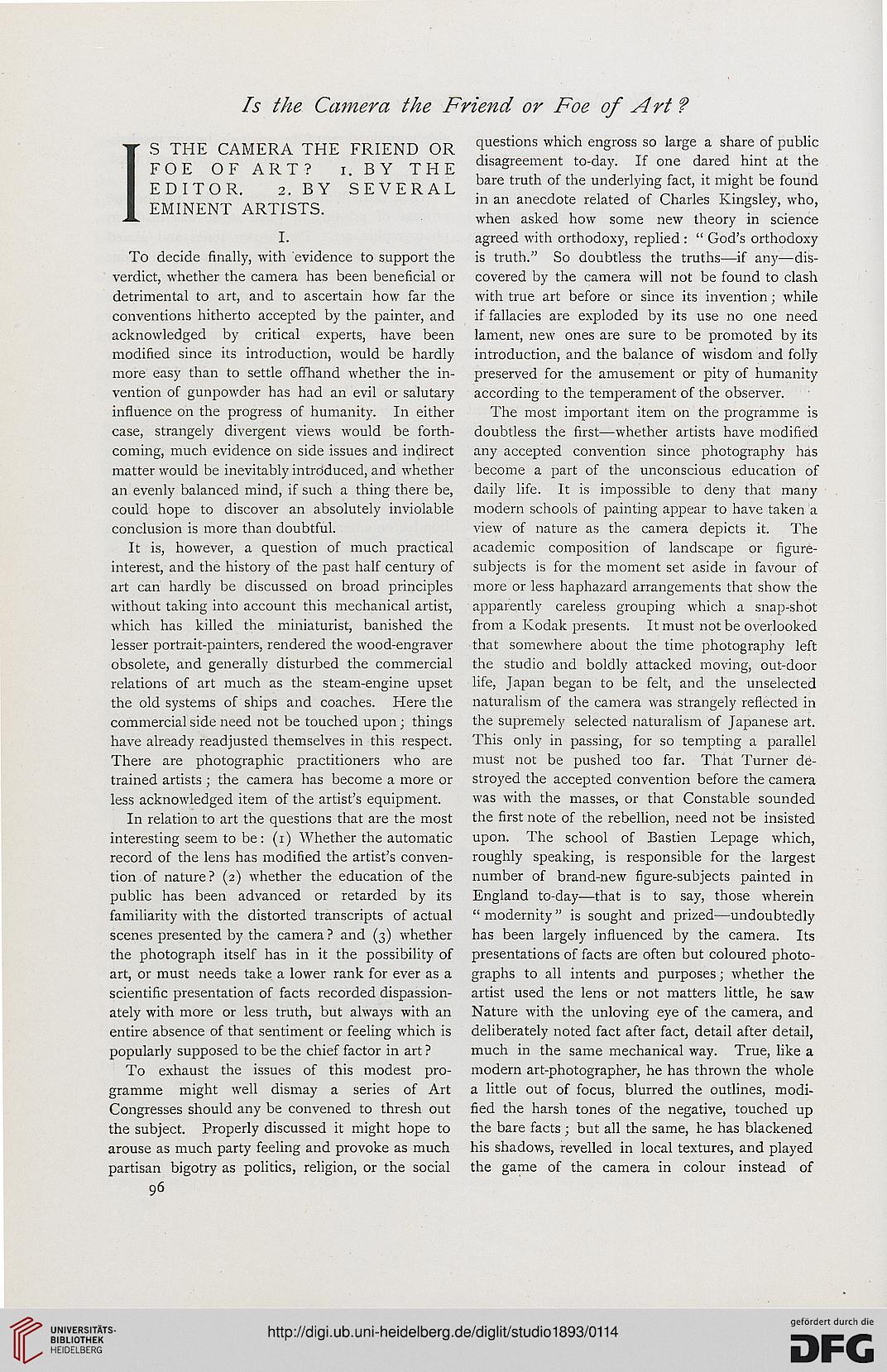 S THE CAMERA THE FRIEND OR
FOE OF ART? i. BY THE
EDITOR. 2. BY SEVERAL
EMINENT ARTISTS.

To decide finally, with evidence to support the
verdict, whether the camera has been beneficial or
detrimental to art, and to ascertain how far the
conventions hitherto accepted by the painter, and
acknowledged by critical experts, have been
modified since its introduction, would be hardly
more easy than to settle offhand whether the in-
vention of gunpowder has had an evil or salutary
influence on the progress of humanity. In either
case, strangely divergent views would be forth-
coming, much evidence on side issues and indirect
matter would be inevitably introduced, and whether
an evenly balanced mind, if such a thing there be,
could hope to discover an absolutely inviolable
conclusion is more than doubtful.

It is, however, a question of much practical
interest, and the history of the past half century of
art can hardly be discussed on broad principles
without taking into account this mechanical artist,
which has killed the miniaturist, banished the
lesser portrait-painters, rendered the wood-engraver
obsolete, and generally disturbed the commercial
relations of art much as the steam-engine upset
the old systems of ships and coaches. Here the
commercial side need not be touched upon ; things
have already readjusted themselves in this respect.
There are photographic practitioners who are
trained artists ; the camera has become a more or
less acknowledged item of the artist's equipment.

In relation to art the questions that are the most
interesting seem to be : (i) Whether the automatic
record of the lens has modified the artist's conven-
tion of nature? (2) whether the education of the
public has been advanced or retarded by its
familiarity with the distorted transcripts of actual
scenes presented by the camera ? and (3) whether
the photograph itself has in it the possibility of
art, or must needs take a lower rank for ever as a
scientific presentation of facts recorded dispassion-
ately with more or less truth, but always with an
entire absence of that sentiment or feeling which is
popularly supposed to be the chief factor in art ?

To exhaust the issues of this modest pro-
gramme might well dismay a series of Art
Congresses should any be convened to thresh out
the subject. Properly discussed it might hope to
arouse as much party feeling and provoke as much
partisan bigotry as politics, religion, or the social
96

questions which engross so large a share of public
disagreement to-day. If one dared hint at the
bare truth of the underlying fact, it might be found
in an anecdote related of Charles Kingsley, who,
when asked how some new theory in science
agreed with orthodoxy, replied : " God's orthodoxy
is truth." So doubtless the truths—if any—dis-
covered by the camera will not be found to clash
with true art before or since its invention; while
if fallacies are exploded by its use no one need
lament, new ones are sure to be promoted by its
introduction, and the balance of wisdom and folly
preserved for the amusement or pity of humanity
according to the temperament of the observer.

The most important item on the programme is
doubtless the first—whether artists have modified
any accepted convention since photography has
become a part of the unconscious education of
daily life. It is impossible to deny that many
modern schools of painting appear to have taken a
view of nature as the camera depicts it. The
academic composition of landscape or figure-
subjects is for the moment set aside in favour of
more or less haphazard arrangements that show the
apparently careless grouping which a snap-shot
from a Kodak presents. It must not be overlooked
that somewhere about the time photography left
the studio and boldly attacked moving, out-door
life, Japan began to be felt, and the unselected
naturalism of the camera was strangely reflected in
the supremely selected naturalism of Japanese art.
This only in passing, for so tempting a parallel
must not be pushed too far. That Turner de-
stroyed the accepted convention before the camera
was with the masses, or that Constable sounded
the first note of the rebellion, need not be insisted
upon. The school of Bastien Lepage which,
roughly speaking, is responsible for the largest
number of brand-new figure-subjects painted in
England to-day—that is to say, those wherein
" modernity" is sought and prized—undoubtedly
has been largely influenced by the camera. Its
presentations of facts are often but coloured photo-
graphs to all intents and purposes; whether the
artist used the lens or not matters little, he saw
Nature with the unloving eye of the camera, and
deliberately noted fact after fact, detail after detail,
much in the same mechanical way. True, like a
modern art-photographer, he has thrown the whole
a little out of focus, blurred the outlines, modi-
fied the harsh tones of the negative, touched up
the bare facts; but all the same, he has blackened
his shadows, revelled in local textures, and played
the game of the camera in colour instead of