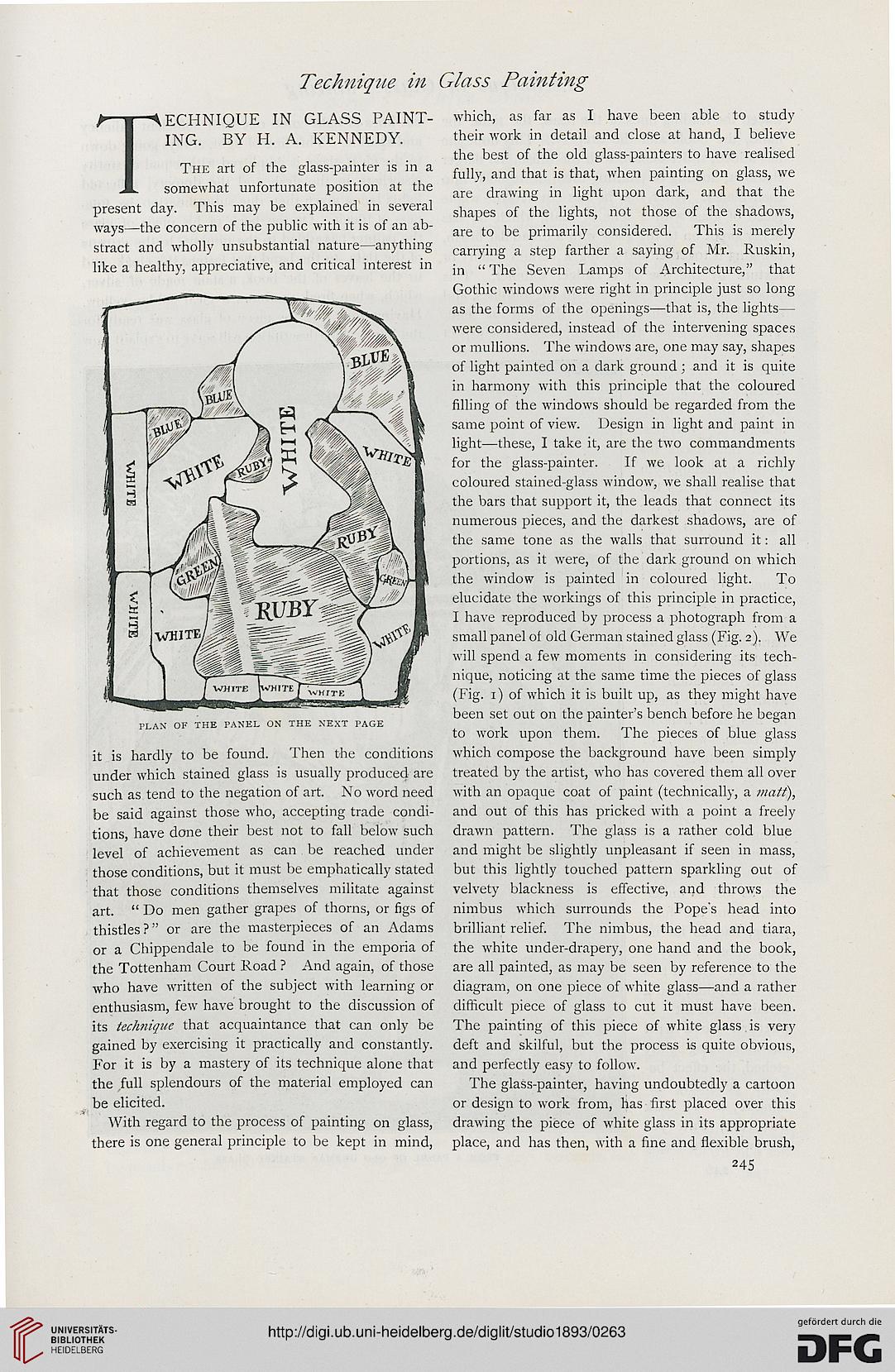 ECHNIQUE IN GLASS PAINT-
ING. BY H. A. KENNEDY.

present day. This may be explained in several
ways—the concern of the public with it is of an ab-
stract and wholly unsubstantial nature—anything
like a healthy, appreciative, and critical interest in

PLAN OF THE PANEL ON THE NEXT PAGE

it is hardly to be found. Then the conditions
under which stained glass is usually produced are
such as tend to the negation of art. No word need
be said against those who, accepting trade condi-
tions, have done their best not to fall below such
level of achievement as can be reached under
those conditions, but it must be emphatically stated
that those conditions themselves militate against
art. " Do men gather grapes of thorns, or figs of
thistles?" or are the masterpieces of an Adams
or a Chippendale to be found in the emporia of
the Tottenham Court Road ? And again, of those
who have written of the subject with learning or
enthusiasm, few have brought to the discussion of
its technique that acquaintance that can only be
gained by exercising it practically and constantly.
For it is by a mastery of its technique alone that
the full splendours of the material employed can
be elicited.

With regard to the process of painting on glass,
there is one general principle to be kept in mind,

which, as far as I have been able to study
their work in detail and close at hand, I believe
the best of the old glass-painters to have realised
fully, and that is that, when painting on glass, we
are drawing in light upon dark, and that the
shapes of the lights, not those of the shadows,
are to be primarily considered. This is merely
carrying a step farther a saying of Mr. Ruskin,
in " The Seven Lamps of Architecture," that
Gothic windows were right in principle just so long
as the forms of the openings—that is, the lights—
were considered, instead of the intervening spaces
or mullions. The windows are, one may say, shapes
of light painted on a dark ground ; and it is quite
in harmony with this principle that the coloured
filling of the windows should be regarded from the
same point of view. Design in light and paint in
light—these, I take it, are the two commandments
for the glass-painter. If we look at a richly
coloured stained-glass window, we shall realise that
the bars that support it, the leads that connect its
numerous pieces, and the darkest shadows, are of
the same tone as the walls that surround it: all
portions, as it were, of the dark ground on which
the window is painted in coloured light. To
elucidate the workings of this principle in practice,
I have reproduced by process a photograph from a
small panel of old German stained glass (Fig. 2). We
will spend a few moments in considering its tech-
nique, noticing at the same time the pieces of glass
(Fig. 1) of which it is built up, as they might have
been set out on the painter's bench before he began
to work upon them. The pieces of blue glass
which compose the background have been simply
treated by the artist, who has covered them all over
with an opaque coat of paint (technically, a matt),
and out of this has pricked with a point a freely
drawn pattern. The glass is a rather cold blue
and might be slightly unpleasant if seen in mass,
but this lightly touched pattern sparkling out of
velvety blackness is effective, and throws the
nimbus which surrounds the Pope's head into
brilliant relief. The nimbus, the head and tiara,
the white under-drapery, one hand and the book,
are all painted, as may be seen by reference to the
diagram, on one piece of white glass—and a rather
difficult piece of glass to cut it must have been.
The painting of this piece of white glass is very
deft and skilful, but the process is quite obvious,
and perfectly easy to follow.

The glass-painter, having undoubtedly a cartoon
or design to work from, has first placed over this
drawing the piece of white glass in its appropriate
place, and has then, with a fine and flexible brush,