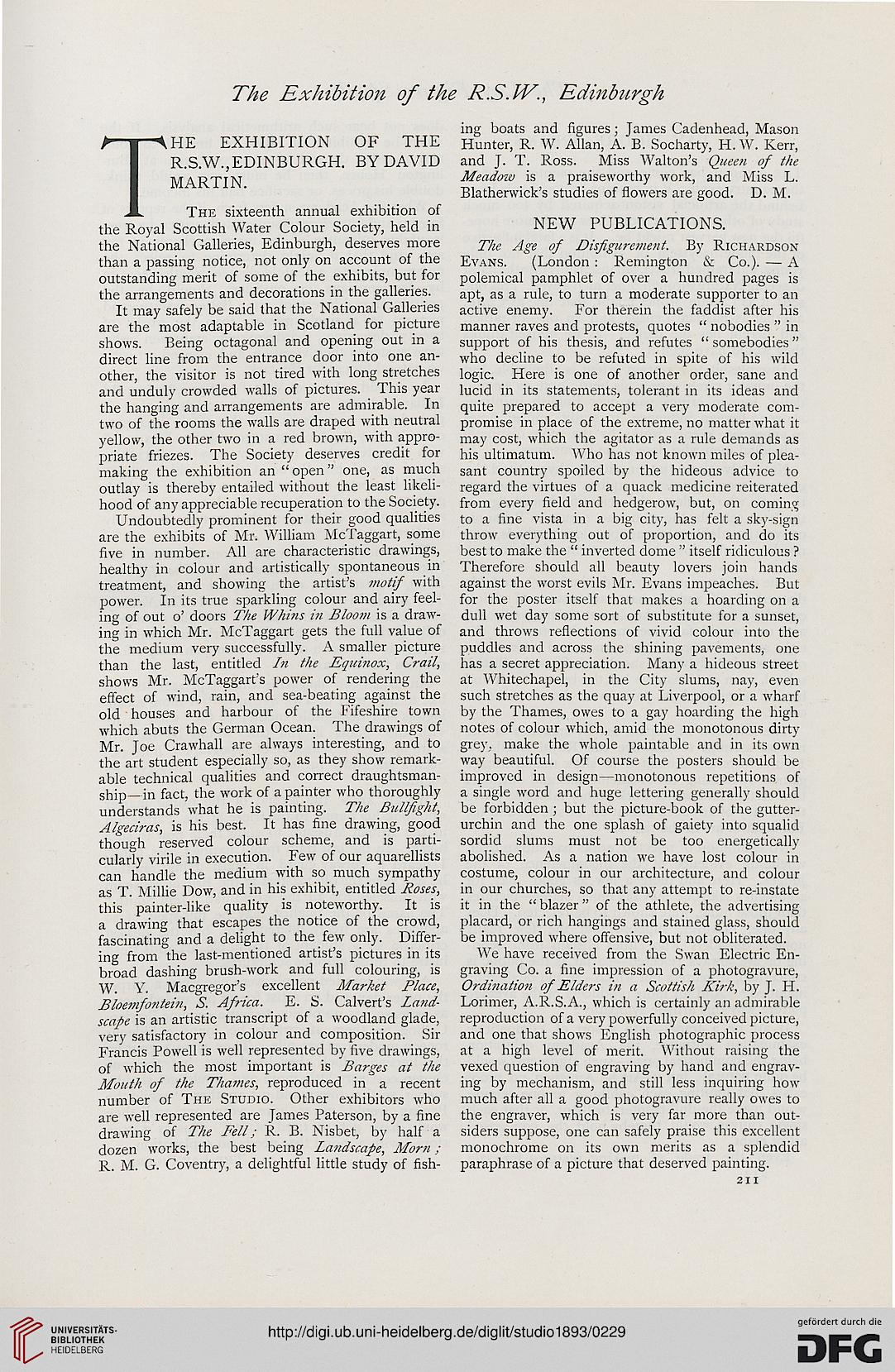 Scroll
OCR fulltext
Information about OCR text
The ExJiibition of the R.S.JV., Edinburgh

HE EXHIBITION OF THE
R.S.W.,EDINBURGH. BY DAVID
MARTIN.

The sixteenth annual exhibition of

the Royal Scottish Water Colour Society, held in
the National Galleries, Edinburgh, deserves more
than a passing notice, not only on account of the
outstanding merit of some of the exhibits, but for
the arrangements and decorations in the galleries.

It may safely be said that the National Galleries
are the most adaptable in Scotland for picture
shows. Being octagonal and opening out in a
direct line from the entrance door into one an-
other, the visitor is not tired with long stretches
and unduly crowded walls of pictures. This year
the hanging and arrangements are admirable. In
two of the rooms the walls are draped with neutral
yellow, the other two in a red brown, with appro-
priate friezes. The Society deserves credit for
making the exhibition an "open" one, as much
outlay is thereby entailed without the least likeli-
hood of any appreciable recuperation to the Society.

Undoubtedly prominent for their good qualities
are the exhibits of Mr. William McTaggart, some
five in number. All are characteristic drawings,
healthy in colour and artistically spontaneous in
treatment, and showing the artist's motif with
power. In its true sparkling colour and airy feel-
ing of out o' doors The Whins in Bloom is a draw-
ing in which Mr. McTaggart gets the full value of
the medium very successfully. A smaller picture
than the last, entitled In the Equinox, Crail,
shows Mr. McTaggart's power of rendering the
effect of wind, rain, and sea-beating against the
old houses and harbour of the Fifeshire town
which abuts the German Ocean. The drawings of
Mr. Joe Crawhall are always interesting, and to
the art student especially so, as they show remark-
able technical qualities and correct draughtsman-
ship—in fact, the work of a painter who thoroughly
understands what he is painting. The Bullfight,
Algeciras, is his best. It has fine drawing, good
though reserved colour scheme, and is parti-
cularly virile in execution. Few of our aquarellists
can handle the medium with so much sympathy
as T. Millie Dow, and in his exhibit, entitled Roses,
this painter-like quality is noteworthy. It is
a drawing that escapes the notice of the crowd,
fascinating and a delight to the few only. Differ-
ing from the last-mentioned artist's pictures in its
broad dashing brush-work and full colouring, is
W. Y. Macgregor's excellent Market Place,
Bloetnfontein, S. Africa. E. S. Calvert's Land-
scape is an artistic transcript of a woodland glade,
very satisfactory in colour and composition. Sir
Francis Powell is well represented by five drawings,
of which the most important is Barges at the
Mouth of the Thames, reproduced in a recent
number of The Studio. Other exhibitors who
are well represented are James Paterson, by a fine
drawing of The Fell; R. B. Nisbet, by half a
dozen works, the best being Landscape, Morn;
R. M. G. Coventry, a delightful little study of fish-

The Age of Disfigurement. By Richardson
Evans. (London : Remington & Co.). — A
polemical pamphlet of over a hundred pages is
apt, as a rule, to turn a moderate supporter to an
active enemy. For therein the faddist after his
manner raves and protests, quotes " nobodies " in
support of his thesis, and refutes " somebodies"
who decline to be refuted in spite of his wild
logic. Here is one of another order, sane and
lucid in its statements, tolerant in its ideas and
quite prepared to accept a very moderate com-
promise in place of the extreme, no matter what it
may cost, which the agitator as a rule demands as
his ultimatum. Who has not known miles of plea-
sant country spoiled by the hideous advice to
regard the virtues of a quack medicine reiterated
from every field and hedgerow, but, on coming
to a fine vista in a big city, has felt a sky-sign
throw everything out of proportion, and do its
best to make the " inverted dome " itself ridiculous ?
Therefore should all beauty lovers join hands
against the worst evils Mr. Evans impeaches. But
for the poster itself that makes a hoarding on a
dull wet day some sort of substitute for a sunset,
and throws reflections of vivid colour into the
puddles and across the shining pavements, one
has a secret appreciation. Many a hideous street
at Whitechapel, in the City slums, nay, even
such stretches as the quay at Liverpool, or a wharf
by the Thames, owes to a gay hoarding the high
notes of colour which, amid the monotonous dirty
grey, make the whole paintable and in its own
way beautiful. Of course the posters should be
improved in design—monotonous repetitions of
a single word and huge lettering generally should
be forbidden ; but the picture-book of the gutter-
urchin and the one splash of gaiety into squalid
sordid slums must not be too energetically
abolished. As a nation we have lost colour in
costume, colour in our architecture, and colour
in our churches, so that any attempt to re-instate
it in the "blazer" of the athlete, the advertising
placard, or rich hangings and stained glass, should
be improved where offensive, but not obliterated.

We have received from the Swan Electric En-
graving Co. a fine impression of a photogravure,
Ordination of Elders in a Scottish Kirk, by J. H.
Lorimer, A.R.S.A., which is certainly an admirable
reproduction of a very powerfully conceiv ed picture,
and one that shows English photographic process
at a high level of merit. Without raising the
vexed question of engraving by hand and engrav-
ing by mechanism, and still less inquiring how
much after all a good photogravure really owes to
the engraver, which is very far more than out-
siders suppose, one can safely praise this excellent
monochrome on its own merits as a splendid
paraphrase of a picture that deserved painting.