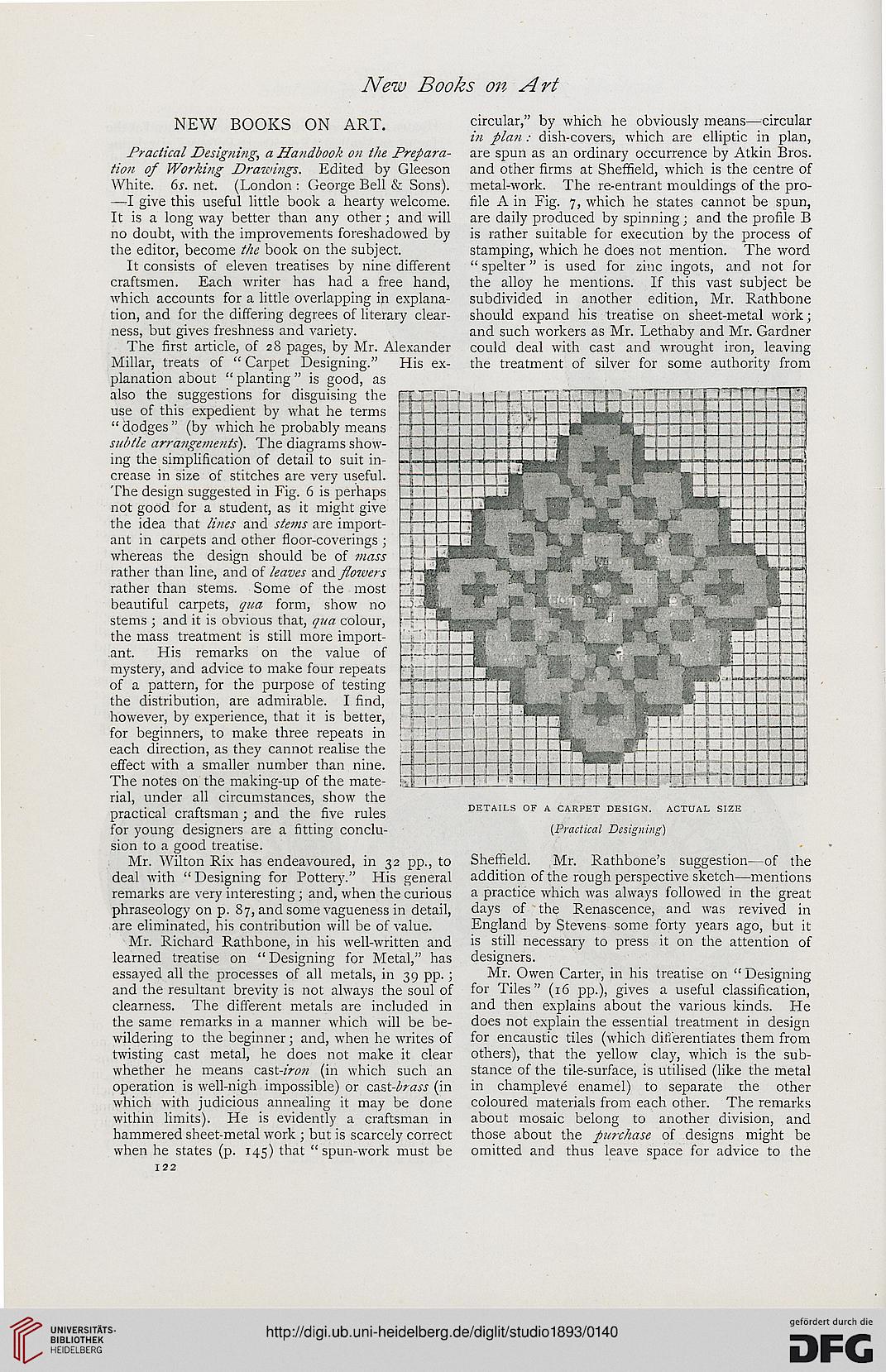 NEW BOOKS ON ART. circular," by which he obviously means—circular

in plan : dish-covers, which are elliptic in plan,

Practical Designing, a Handbook on the Prepara- are spun as an ordinary occurrence by Atkin Bros.
tion of Working Drawings. Edited by Gleeson and other firms at Sheffield, which is the centre of
White. 6s. net. (London : George Bell & Sons), metal-work. The re-entrant mouldings of the pro-
—I give this useful little book a hearty welcome, file A in Fig. 7, which he states cannot be spun,
It is a long way better than any other ; and will are daily produced by spinning; and the profile B
no doubt, with the improvements foreshadowed by is rather suitable for execution by the process of
the editor, become the book on the subject. stamping, which he does not mention. The word

It consists of eleven treatises by nine different " spelter" is used for zinc ingots, and not for
craftsmen. Each writer has had a free hand, the alloy he mentions. If this vast subject be
which accounts for a little overlapping in explana- subdivided in another edition, Mr. Rathbone
tion, and for the differing degrees of literary clear- should expand his treatise on sheet-metal work;
ness, but gives freshness and variety. and such workers as Mr. Lethaby and Mr. Gardner

The first article, of 28 pages, by Mr. Alexander could deal with cast and wrought iron, leaving
Millar, treats of " Carpet Designing." His ex- the treatment of silver for some authority from
planation about " planting " is good, as
also the suggestions for disguising the
use of this expedient by what he terms
" dodges " (by which he probably means
subtle arrangements). The diagrams show-
ing the simplification of detail to suit in-
crease in size of stitches are very useful.
The design suggested in Fig. 6 is perhaps
not good for a student, as it might give
the idea that lines and stems are import-
ant in carpets and other floor-coverings ;
whereas the design should be of mass
rather than line, and of leaves and flowers
rather than stems. Some of the most
beautiful carpets, qua form, show no
stems ; and it is obvious that, qua colour,
the mass treatment is still more import-
.ant. His remarks on the value of
mystery, and advice to make four repeats
of a pattern, for the purpose of testing
the distribution, are admirable. I find,
however, by experience, that it is better,
for beginners, to make three repeats in
each direction, as they cannot realise the
effect with a smaller number than nine.
The notes on the making-up of the mate-
rial, under all circumstances, show the
practical craftsman ; and the five rules
for young designers are a fitting conclu- (Practical Designing)

sion to a good treatise.

Mr. Wilton Rix has endeavoured, in 32 pp., to Sheffield. Mr. Rathbone's suggestion- -of the
deal with "Designing for Pottery." His general addition of the rough perspective sketch—mentions
remarks are very interesting; and, when the curious a practice which was always followed in the great
phraseology on p. 87, and some vagueness in detail, days of the Renascence, and was revived in
are eliminated, his contribution will be of value. England by Stevens some forty years ago, but it

Mr. Richard Rathbone, in his well-written and is still necessary to press it on the attention of
learned treatise on "Designing for Metal," has designers.

essayed all the processes of all metals, in 39 pp.; Mr. Owen Carter, in his treatise on " Designing
and the resultant brevity is not always the soul of for Tiles" (16 pp.), gives a useful classification,
clearness. The different metals are included in and then explains about the various kinds. He
the same remarks in a manner which will be be- does not explain the essential treatment in design
wildering to the beginner; and, when he writes of for encaustic tiles (which differentiates them from
twisting cast metal, he does not make it clear others), that the yellow clay, which is the sub-
whether he means cast-iroti (in which such an stance of the tile-surface, is utilised (like the metal
operation is well-nigh impossible) or ca.st-brass (in in champleve enamel) to separate the other
which with judicious annealing it may be done coloured materials from each other. The remarks
within limits). He is evidently a craftsman in about mosaic belong to another division, and
hammered sheet-metal work ; but is scarcely correct those about the purchase of designs might be
when he states (p. 145) that " spun-work must be omitted and thus leave space for advice to the