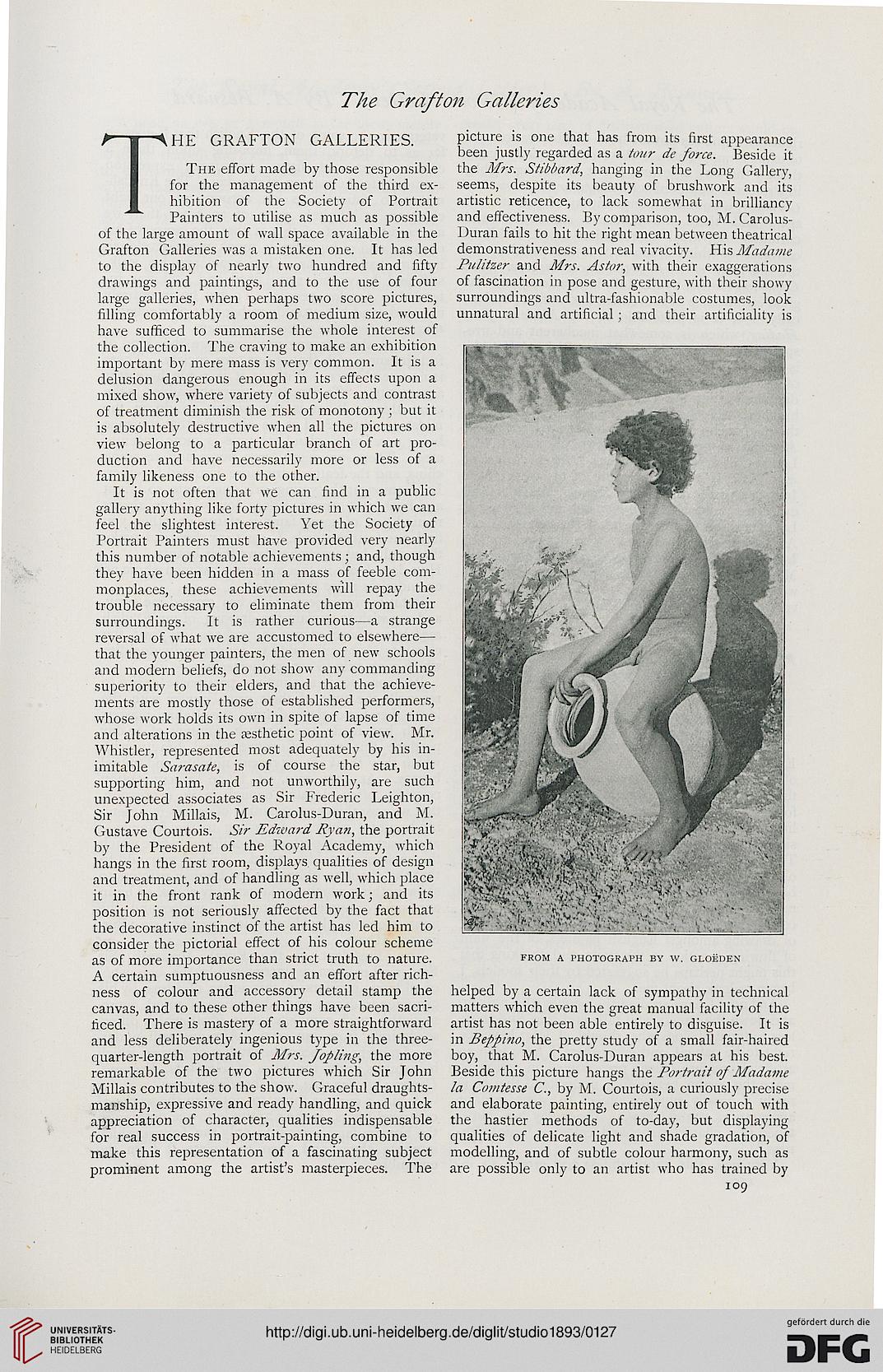 THE GRAFTON GALLERIES. picture is one that has from its first appearance
been justly regarded as a tour de force. Beside it
The effort made by those responsible the Mrs. Stibbard, hanging in the Long Gallery,
for the management of the third ex- seems, despite its beauty of brushwork and its
hibition of the Society of Portrait artistic reticence, to lack somewhat in brilliancy
Painters to utilise as much as possible and effectiveness. By comparison, too, M. Carolus-
of the large amount of wall space available in the Duran fails to hit the right mean between theatrical
Grafton Galleries was a mistaken one. It has led demonstrativeness and real vivacity. His Madame
to the display of nearly two hundred and fifty Pulitzer and Airs. Astor, with their exaggerations
drawings and paintings, and to the use of four of fascination in pose and gesture, with their showy
large galleries, when perhaps two score pictures, surroundings and ultra-fashionable costumes, look
filling comfortably a room of medium size, would unnatural and artificial; and their artificiality is
have sufficed to summarise the whole interest of
the collection. The craving to make an exhibition
important by mere mass is very common. It is a
delusion dangerous enough in its effects upon a
mixed show, where variety of subjects and contrast
of treatment diminish the risk of monotony ; but it
is absolutely destructive when all the pictures on
view belong to a particular branch of art pro-
duction and have necessarily more or less of a
family likeness one to the other.

It is not often that we can find in a public
gallery anything like forty pictures in which we can
feel the slightest interest. Yet the Society of
Portrait Painters must have provided very nearly
this number of notable achievements ; and, though
they have been hidden in a mass of feeble com-
monplaces, these achievements will repay the
trouble necessary to eliminate them from their
surroundings. It is rather curious—a strange
reversal of what we are accustomed to elsewhere—
that the younger painters, the men of new schools
and modern beliefs, do not show any commanding
superiority to their elders, and that the achieve-
ments are mostly those of established performers,
whose work holds its own in spite of lapse of time
and alterations in the aesthetic point of view. Mr.
Whistler, represented most adequately by his in-
imitable Sarasate, is of course the star, but
supporting him, and not unworthily, are such
unexpected associates as Sir Frederic Leighton,
Sir John Millais, M. Carolus-Duran, and M.
Gustave Courtois. Sir Edwa?-d Ryan, the portrait
by the President of the Royal Academy, which
hangs in the first room, displays qualities of design
and treatment, and of handling as well, which place
it in the front rank of modern work; and its
position is not seriously affected by the fact that
the decorative instinct of the artist has led him to
consider the pictorial effect of his colour scheme
as of more importance than strict truth to nature. from a photograph by w. gloeden

A certain sumptuousness and an effort after rich-
ness of colour and accessory detail stamp the helped by a certain lack of sympathy in technical
canvas, and to these other things have been sacri- matters which even the great manual facility of the
ficed. There is mastery of a more straightforward artist has not been able entirely to disguise. It is
and less deliberately ingenious type in the three- in Beppino, the pretty study of a small fair-haired
quarter-length portrait of Mrs. /opting, the more boy, that M. Carolus-Duran appears at his best,
remarkable of the two pictures which Sir John Beside this picture hangs the Portrait of Madame
Millais contributes to the show. Graceful draughts- la Comtesse C, by M. Courtois, a curiously precise
manship, expressive and ready handling, and quick and elaborate painting, entirely out of touch with
appreciation of character, qualities indispensable the hastier methods of to-day, but displaying
for real success in portrait-painting, combine to qualities of delicate light and shade gradation, of
make this representation of a fascinating subject modelling, and of subtle colour harmony, such as
prominent among the artist's masterpieces. The are possible only to an artist who has trained by