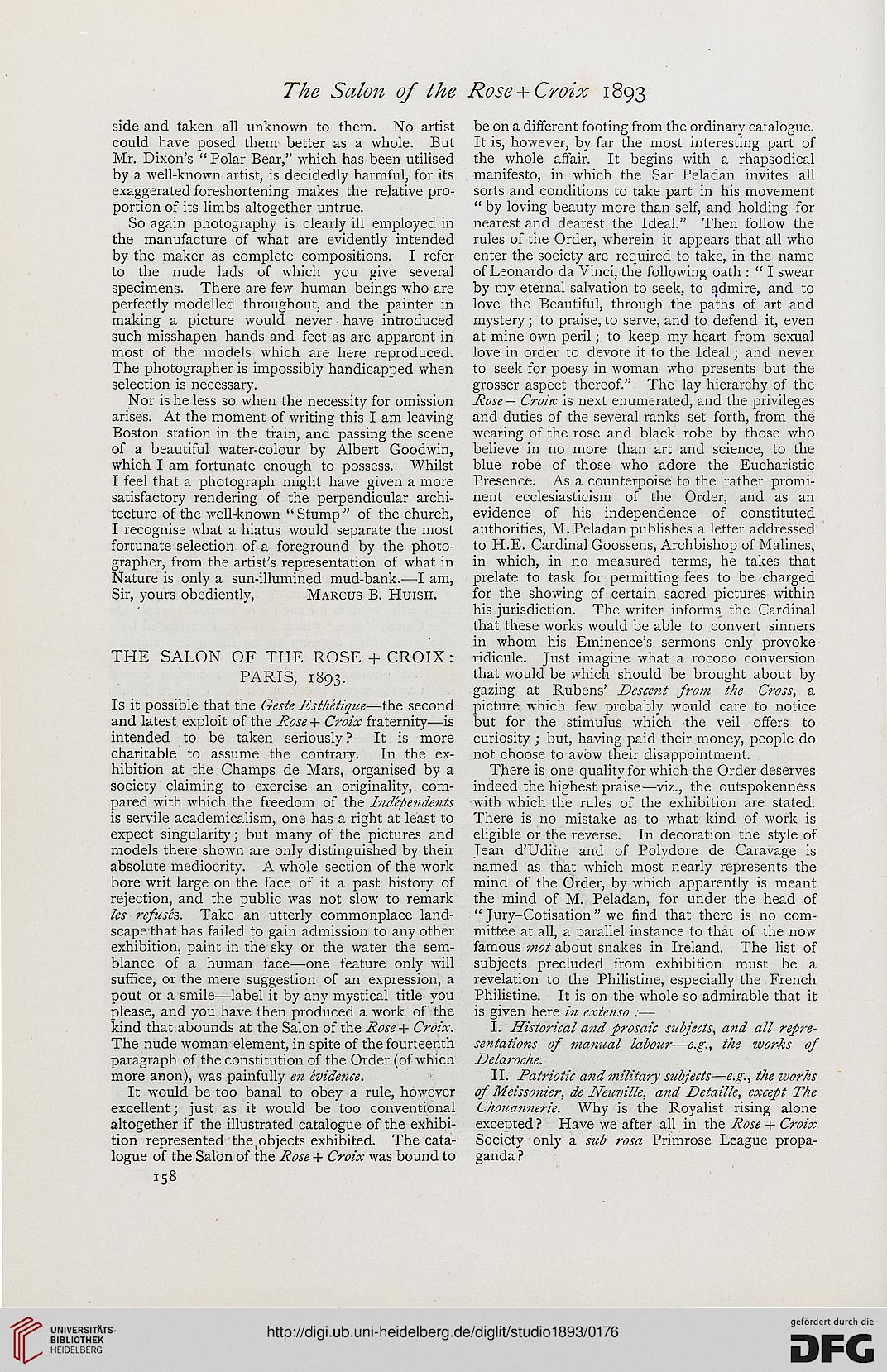 side and taken all unknown to them. No artist
could have posed them better as a whole. But
Mr. Dixon's " Polar Bear," which has been utilised
by a well-known artist, is decidedly harmful, for its
exaggerated foreshortening makes the relative pro-
portion of its limbs altogether untrue.

So again photography is clearly ill employed in
the manufacture of what are evidently intended
by the maker as complete compositions. I refer
to the nude lads of which you give several
specimens. There are few human beings who are
perfectly modelled throughout, and the painter in
making a picture would never have introduced
such misshapen hands and feet as are apparent in
most of the models which are here reproduced.
The photographer is impossibly handicapped when
selection is necessary.

Nor is he less so when the necessity for omission
arises. At the moment of writing this I am leaving
Boston station in the train, and passing the scene
of a beautiful water-colour by Albert Goodwin,
which I am fortunate enough to possess. Whilst
I feel that a photograph might have given a more
satisfactory rendering of the perpendicular archi-
tecture of the well-known " Stump " of the church,
I recognise what a hiatus would separate the most
fortunate selection of a foreground by the photo-
grapher, from the artist's representation of what in
Nature is only a sun-illumined mud-bank.—I am,
Sir, yours obediently, Marcus B. Huish.

Is it possible that the Geste Esthetique—the second
and latest exploit of the Rose + Croix fraternity—is
intended to be taken seriously ? It is more
charitable to assume . the contrary. In the ex-
hibition at the Champs de Mars, organised by a
society claiming to exercise an originality, com-
pared with which the freedom of the Independents
is servile academicalism, one has a right at least to
expect singularity; but many of the pictures and
models there shown are only distinguished by their
absolute mediocrity. A whole section of the work
bore writ large on the face of it a past history of
rejection, and the public was not slow to remark
les refuses. Take an utterly commonplace land-
scape that has failed to gain admission to any other
exhibition, paint in the sky or the water the sem-
blance of a human face—one feature only will
suffice, or the mere suggestion of an expression, a
pout or a smile—label it by any mystical title you
please, and you have then produced a work of the
kind that abounds at the Salon of the Rose + Croix.
The nude woman element, in spite of the fourteenth
paragraph of the constitution of the Order (of which
more anon), was painfully en evidence.

It would be too banal to obey a rule, however
excellent; just as it would be too conventional
altogether if the illustrated catalogue of the exhibi-
tion represented the objects exhibited. The cata-
logue of the Salon of the Rose + Croix was bound to

be on a different footing from the ordinary catalogue.
It is, however, by far the most interesting part of
the whole affair. It begins with a rhapsodical
manifesto, in which the Sar Peladan invites all
sorts and conditions to take part in his movement
" by loving beauty more than self, and holding for
nearest and dearest the Ideal." Then follow the
rules of the Order, wherein it appears that all who
enter the society are required to take, in the name
of Leonardo da Vinci, the following oath : " I swear
by my eternal salvation to seek, to admire, and to
love the Beautiful, through the paths of art and
mystery; to praise, to serve, and to defend it, even
at mine own peril; to keep my heart from sexual
love in order to devote it to the Ideal; and never
to seek for poesy in woman who presents but the
grosser aspect thereof." The lay hierarchy of the
Rose + Croitc is next enumerated, and the privileges
and duties of the several ranks set forth, from the
wearing of the rose and black robe by those who
believe in no more than art and science, to the
blue robe of those who adore the Eucharistic
Presence. As a counterpoise to the rather promi-
nent ecclesiasticism of the Order, and as an
evidence of his independence of constituted
authorities, M. Peladan publishes a letter addressed
to H.E. Cardinal Goossens, Archbishop of Malines,
in which, in no measured terms, he takes that
prelate to task for permitting fees to be charged
for the showing of certain sacred pictures within
his jurisdiction. The writer informs the Cardinal
that these works would be able to convert sinners
in whom his Eminence's sermons only provoke
ridicule. Just imagine what a rococo conversion
that would be which should be brought about by
gazing at Rubens' Descetit from the Cross, a
picture which few probably would care to notice
but for the stimulus which the veil offers to
curiosity ; but, having paid their money, people do
not choose to avow their disappointment.

There is one quality for which the Order deserves
indeed the highest praise—viz., the outspokenness
with which the rules of the exhibition are stated.
There is no mistake as to what kind of work is
eligible or the reverse. In decoration the style of
Jean d'Udine and of Polydore de Caravage is
named as that which most nearly represents the
mind of the Order, by which apparently is meant
the mind of M. Peladan, for under the head of
" Jury-Cotisation" we find that there is no com-
mittee at all, a parallel instance to that of the now
famous mot about snakes in Ireland. The list of
subjects precluded from exhibition must be a
revelation to the Philistine, especially the French
Philistine. It is on the whole so admirable that it
is given here in cxtenso :—

I. Historical and prosaic subjects, and all repre-
sentations of manual labour—e.g., the worhs of
Delaroche.

II. Patriotic and7nilitary subjects—e.g., theivorks
of Meissonier, de Netiville, and Detaille, except The
Choicannerie. Why is the Royalist rising alone
excepted ? Have we after all in the Rose + Croix
Society only a sub rosa Primrose League propa-
ganda ?