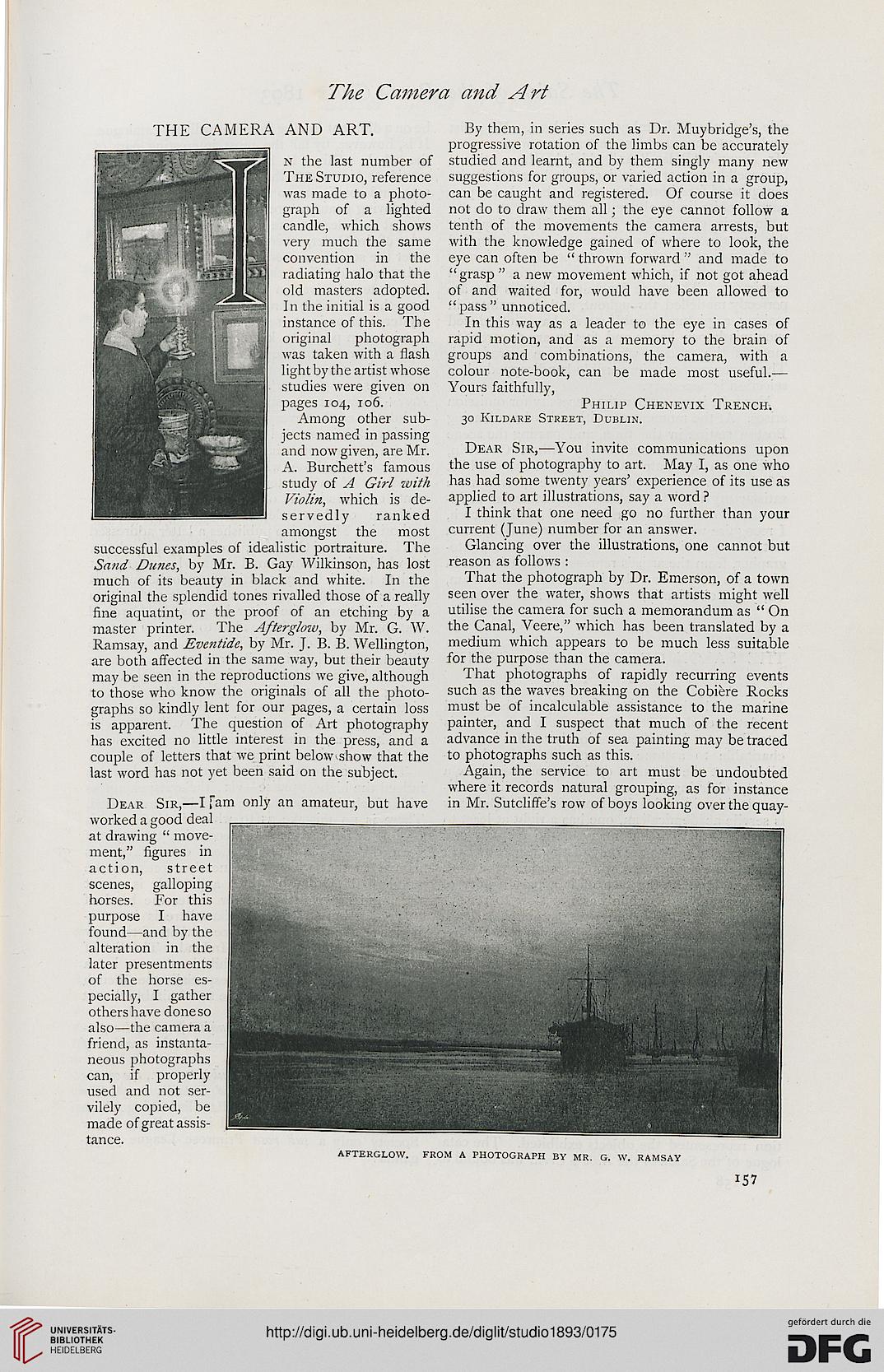 Information about OCR text
The Camera and Art

THE CAMERA AND ART. By them, in series such as Dr. Muybridge's, the

progressive rotation of the limbs can be accurately
n the last number of studied and learnt, and by them singly many new
The Studio, reference suggestions for groups, or varied action in a group,
was made to a photo- can be caught and registered. Of course it does
graph of a lighted not do to draw them all ; the eye cannot follow a
candle, which shows tenth of the movements the camera arrests, but
very much the same with the knowledge gained of where to look, the
convention in the eye can often be " thrown forward " and made to
radiating halo that the "grasp " a new movement which, if not got ahead
old masters adopted, of and waited for, would have been allowed to
In the initial is a good " pass " unnoticed.

instance of this. The In this way as a leader to the eye in cases of
original photograph rapid motion, and as a memory to the brain of
was taken with a flash groups and combinations, the camera, with a
light by the artist whose colour note-book, can be made most useful.—
studies were given on Yours faithfully,

Among other sub- 30 Kildare Street, Dublin.
jects named in passing

and now given, are Mr. Dear Sir,—You invite communications upon
A. Burchett's famous tne use of photography to art. May I, as one who
study of A Girl with has had some twenty years' experience of its use as
Violin, which is de- applied to art illustrations, say a word ?
servedly ranked I think that one need go no further than your
amongst the most current (June) number for an answer,
successful examples of idealistic portraiture. The Glancing over the illustrations, one cannot but
Sand Dunes, by Mr. B. Gay Wilkinson, has lost reason as follows :

much of its beauty in black and white. In the That the photograph by Dr. Emerson, of a town
original the splendid tones rivalled those of a really seen over the water, shows that artists might well
fine aquatint, or the proof of an etching by a utilise the camera for such a memorandum as " On
master printer. The Afterglow, by Mr. G. W. the Canal, Veere," which has been translated by a
Ramsay, and Eventide, by Mr. J. B. B. Wellington, medium which appears to be much less suitable
are both affected in the same way, but their beauty for the purpose than the camera,
may be seen in the reproductions we give, although That photographs of rapidly recurring events
to those who know the originals of all the photo- such as the waves breaking on the Cobiere Rocks
graphs so kindly lent for our pages, a certain loss must be of incalculable assistance to the marine
is apparent. The question of Art photography painter, and I suspect that much of the recent
has excited no little interest in the press, and a advance in the truth of sea painting may be traced
couple of letters that we print below show that the to photographs such as this.

last word has not yet been said on the subject. Again, the service to art must be undoubted

where it records natural grouping, as for instance
Dear Sir,—I fam only an amateur, but have in Mr. Sutcliffe's row of boys looking over the quay-
worked a good deal
at drawing " move-
ment," figures in
action, street
scenes, galloping
horses. For this
purpose I have
found—and by the
alteration in the
later presentments
of the horse es-
pecially, I gather
others have done so
also—the camera a
friend, as instanta-
neous photographs
can, if properly
used and not ser-
vilely copied, be
made of great assis-
tance.

afterglow. from a photograph by mr. g. w. ramsay