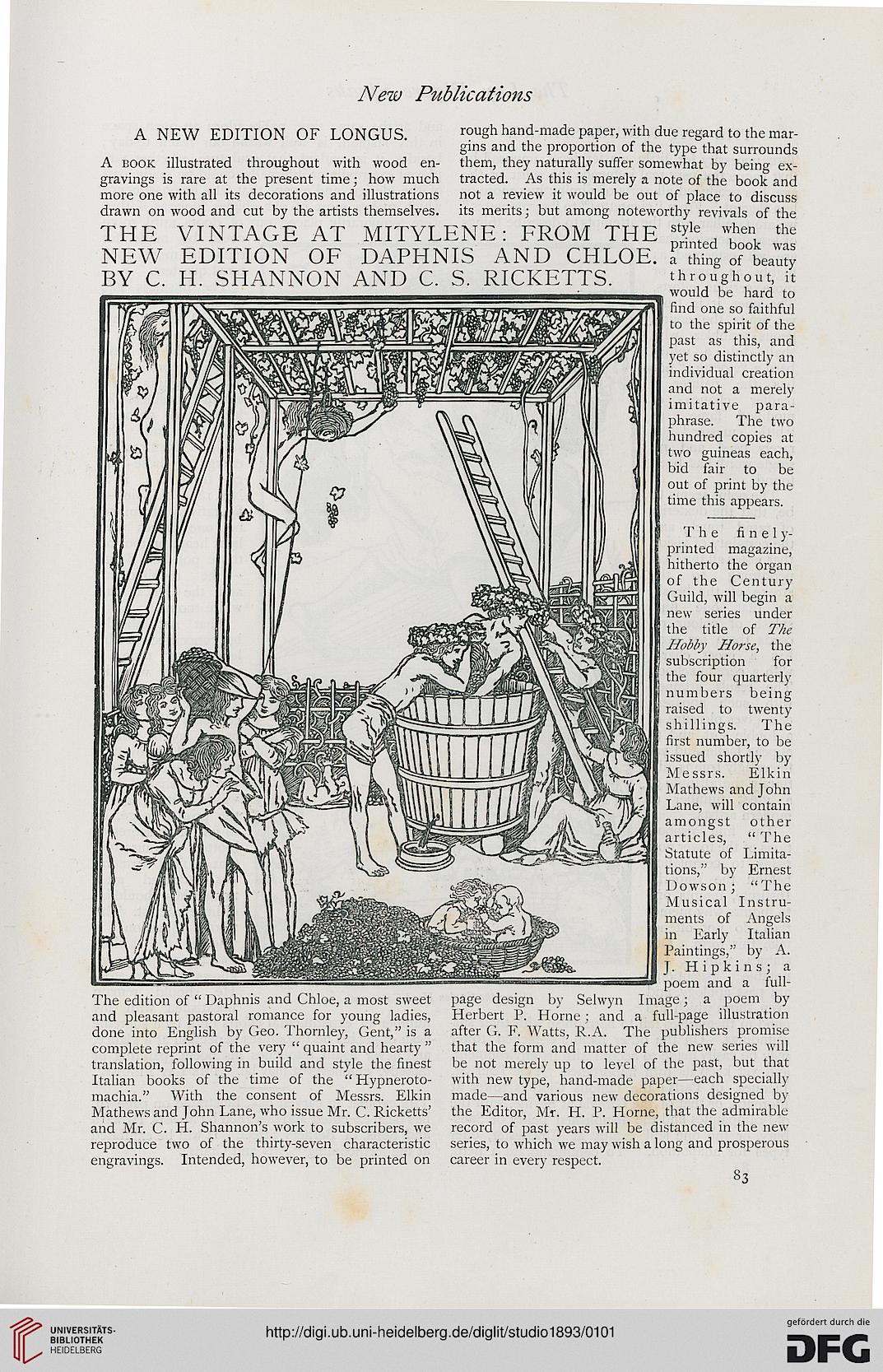 A NEW EDITION OF LONGUS. rough hand-made paper, with due regard to the mar-

gins and the proportion of the type that surrounds
A book illustrated throughout with wood en- them, they naturally suffer somewhat by being ex-
gravings is rare at the present time; how much tracted. As this is merely a note of the book and
more one with all its decorations and illustrations not a review it would be out of place to discuss
drawn on wood and cut by the artists themselves, its merits; but among noteworthy revivals of the

THE VINTAGE AT MITYLENE: FROM THE stylet whhen the
NEW EDITION OF DAPHNIS AND CHLOE. a "thing of°beauty
BY C. H. SHANNON AND C. S. RICKETTS. throughout, it

would be hard to
find one so faithful
to the spirit of the
past as this, and
yet so distinctly an
individual creation
and not a merely
imitative para-
phrase. The two
hundred copies at
two guineas each,
bid fair to be
out of print by the
time this appears.

T he fi n e I y-
printed magazine,
hitherto the organ
of the Century
Guild, will begin a
new series under
the title of The
Hobby Horse, the
subscription for
the four quarterly
numbers being
raised to twenty
shillings. The
first number, to be
issued shortly by
Messrs. Elkin
Mathews and John
Lane, will contain
amongst other
articles, " The
Statute of Limita-
tions," by Ernest
Dowson ; "The
Musical Instru-
ments of Angels
in Early Italian
Paintings," by A.
J. H i p k i n s ; a
poem and a full-

The edition of " Daphnis and Chloe, a most sweet page design by Selwyn Image ; a poem by
and pleasant pastoral romance for young ladies, Herbert P. Home ; and a full-page illustration
done into English by Geo. Thornley, Gent," is a after G. F. Watts, R.A. The publishers promise
complete reprint of the very " quaint and hearty " that the form and matter of the new series will
translation, following in build and style the finest be not merely up to level of the past, but that
Italian books of the time of the " Hypneroto- with new type, hand-made paper—each specially
machia." With the consent of Messrs. Elkin made—and various new decorations designed by
Mathews and John Lane, who issue Mr. C. Ricketts' the Editor, Mr. H. P. Home, that the admirable
and Mr. C. H. Shannon's work to subscribers, we record of past years will be distanced in the new
reproduce two of the thirty-seven characteristic series, to which we may wish a long and prosperous
engravings. Intended, however, to be printed on career in every respect.