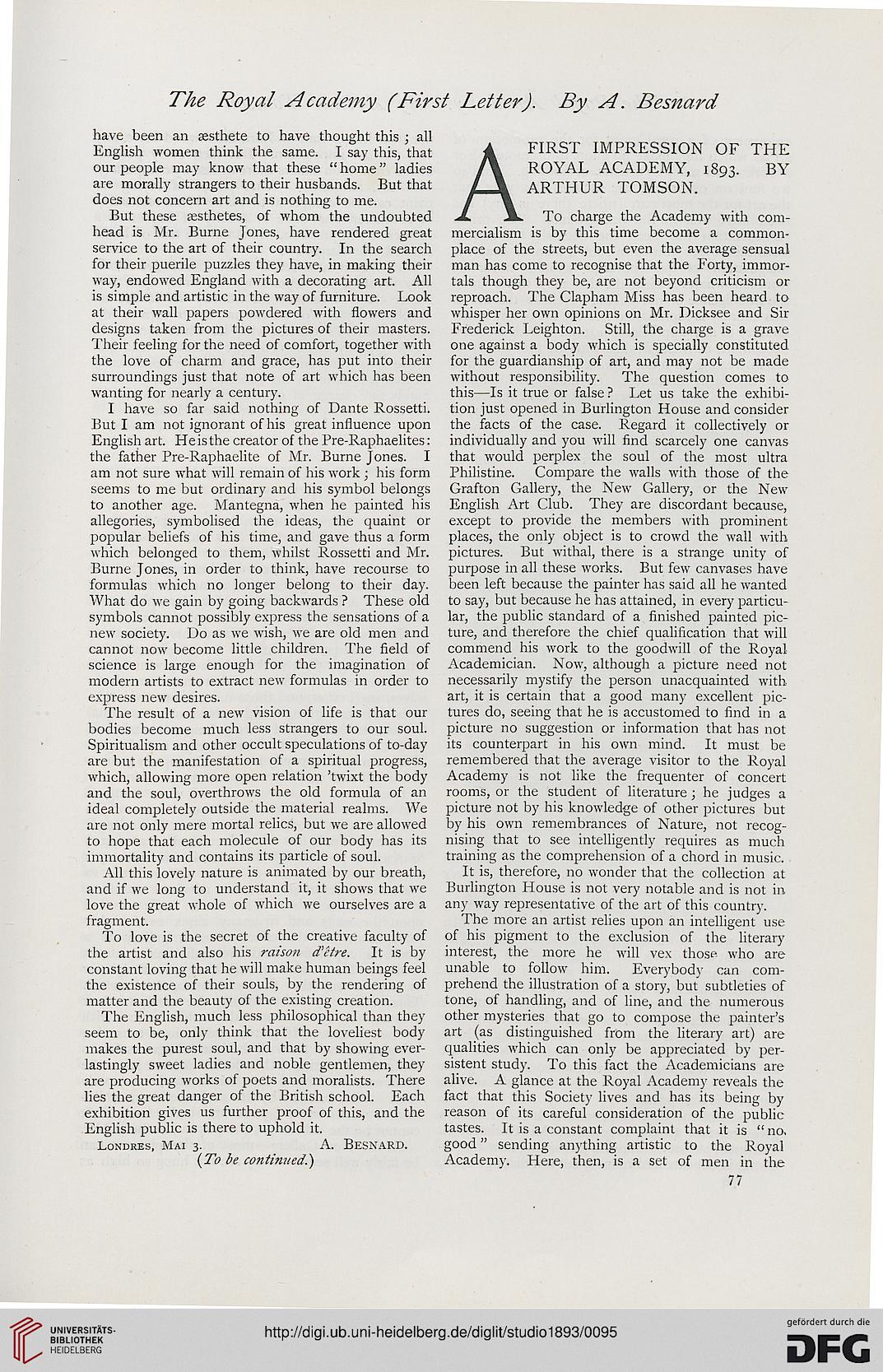 have been an aesthete to have thought this ; all
English women think the same. I say this, that
our people may know that these " home" ladies
are morally strangers to their husbands. But that
does not concern art and is nothing to me.

But these aesthetes, of whom the undoubted
head is Mr. Burne Jones, have rendered great
service to the art of their country. In the search
for their puerile puzzles they have, in making their
way, endowed England with a decorating art. All
is simple and artistic in the way of furniture. Look
at their wall papers powdered with flowers and
designs taken from the pictures of their masters.
Their feeling for the need of comfort, together with
the love of charm and grace, has put into their
surroundings just that note of art which has been
wanting for nearly a century.

I have so far said nothing of Dante Rossetti.
But I am not ignorant of his great influence upon
English art. He is the creator of the Pre-Raphaelites:
the father Pre-Raphaelite of Mr. Burne Jones. I
am not sure what will remain of his work ; his form
seems to me but ordinary and his symbol belongs
to another age. Mantegna, when he painted his
allegories, symbolised the ideas, the quaint or
popular beliefs of his time, and gave thus a form
which belonged to them, whilst Rossetti and Mr.
Burne Jones, in order to think, have recourse to
formulas which no longer belong to their day.
What do we gain by going backwards ? These old
symbols cannot possibly express the sensations of a
new society. Do as we wish, we are old men and
cannot now become little children. The field of
science is large enough for the imagination of
modern artists to extract new formulas in order to
express new desires.

The result of a new vision of life is that our
bodies become much less strangers to our soul.
Spiritualism and other occult speculations of to-day
are but the manifestation of a spiritual progress,
which, allowing more open relation 'twixt the body
and the soul, overthrows the old formula of an
ideal completely outside the material realms. We
are not only mere mortal relics, but we are allowed
to hope that each molecule of our body has its
immortality and contains its particle of soul.

All this lovely nature is animated by our breath,
and if we long to understand it, it shows that we
love the great whole of which we ourselves are a
fragment.

To love is the secret of the creative faculty of
the artist and also his raison d'etre. It is by
constant loving that he will make human beings feel
the existence of their souls, by the rendering of
matter and the beauty of the existing creation.

The English, much less philosophical than they
seem to be, only think that the loveliest body
makes the purest soul, and that by showing ever-
lastingly sweet ladies and noble gentlemen, they
are producing works of poets and moralists. There
lies the great danger of the British school. Each
exhibition gives us further proof of this, and the
English public is there to uphold it.

AFIRST IMPRESSION OF THE
ROYAL ACADEMY, 1893. BY
ARTHUR TOMSON.
To charge the Academy with com-
mercialism is by this time become a common-
place of the streets, but even the average sensual
man has come to recognise that the Forty, immor-
tals though they be, are not beyond criticism or
reproach. The Clapham Miss has been heard to
whisper her own opinions on Mr. Dicksee and Sir
Frederick Leighton. Still, the charge is a grave
one against a body which is specially constituted
for the guardianship of art, and may not be made
without responsibility. The question comes to
this—Is it true or false ? Let us take the exhibi-
tion just opened in Burlington House and consider
the facts of the case. Regard it collectively or
individually and you will find scarcely one canvas
that would perplex the soul of the most ultra
Philistine. Compare the walls with those of the
Grafton Gallery, the New Gallery, or the New
English Art Club. They are discordant because,
except to provide the members with prominent
places, the only object is to crowd the wall with
pictures. But withal, there is a strange unity of
purpose in all these works. But few canvases have
been left because the painter has said all he wanted
to say, but because he has attained, in every particu-
lar, the public standard of a finished painted pic-
ture, and therefore the chief qualification that will
commend his work to the goodwill of the Royal
Academician. Now, although a picture need not
necessarily mystify the person unacquainted with
art, it is certain that a good many excellent pic-
tures do, seeing that he is accustomed to find in a
picture no suggestion or information that has not
its counterpart in his own mind. It must be
remembered that the average visitor to the Royal
Academy is not like the frequenter of concert
rooms, or the student of literature ; he judges a
picture not by his knowledge of other pictures but
by his own remembrances of Nature, not recog-
nising that to see intelligently requires as much
training as the comprehension of a chord in music.

It is, therefore, no wonder that the collection at
Burlington House is not very notable and is not in
any way representative of the art of this country.

The more an artist relies upon an intelligent use
of his pigment to the exclusion of the literary
interest, the more he will vex those who are
unable to follow him. Everybody can com-
prehend the illustration of a story, but subtleties of
tone, of handling, and of line, and the numerous
other mysteries that go to compose the painter's
art (as distinguished from the literary art) are
qualities which can only be appreciated by per-
sistent study. To this fact the Academicians are
alive. A glance at the Royal Academy reveals the
fact that this Society lives and has its being by
reason of its careful consideration of the public-
tastes. It is a constant complaint that it is "no.
good" sending anything artistic to the Royal
Academy. Here, then, is a set of men in the